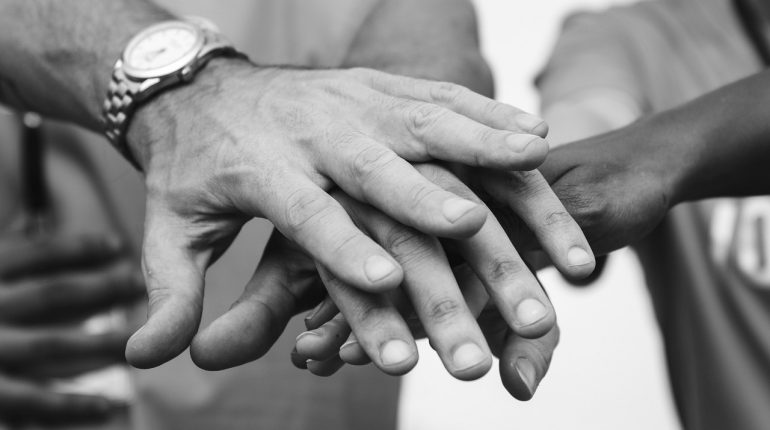 Recently I was looking at some art in a friend’s apartment when she and her husband shared with me their tradition of making a painting each year on their anniversary. One begins on the canvas and the other finishes. Neither of them is a painter by profession—she’s a poet, he’s an urban planner—but this is how they express themselves as a pair. I couldn’t stop looking at the canvases of different sizes and shapes that hung in their hallway; I was smitten with each as an act of intimacy and partnership.

I’m struck by the coupling of creative instincts, of what may be drawn from an artist when she is pushed by another’s thinking, the possibilities born when a particular sensibility sparks and build upon another’s. How do sister and brother, a relationship that for me is always on the brink of maddening, connect on a level that inspires creativity in tandem? How are lovers so in sync with each other as to together forge not only families but also whole exhibitions?

We see the results of collaborations as harmonious creations, but I suspect the process is messy, even hostile in the making. I enjoy sensing the tensions and frictions that must surface when joined minds excite one other. Do Karin Dreijer Andersson and Olof Dreijer of The Knife ignore or use to advantage their sibling bloodline in their music? How far can a deep understanding of another individual’s obsessions and vulnerabilities be wielded or manipulated to produce something beautiful, even if it becomes antagonistic, whether intentional or not?

The magic of collaboration in music and acting is a no-brainer, but it’s trickier to gauge the potency of two or more minds together in other areas. In art, why is one dandy standing in a field not as significant as two dandies? One dandy writing an ode to poetry is not as wry and charming as two. In the shared world of Gilbert & George, art is for all and everything these two dandy artists do—sing, walk, stick out their tongues—is living sculpture. They, the artists, are their own characters: wistful, melancholy but hopeful that art can impact the world. With their wry, tongue-in-cheek reflections on the role of the artist, one dandy is rarely seen without the other. And it works; neither Gilbert nor George could achieve this way of living/making as well on his own.

Collaborations seem at times like fictional worlds, made up not only of the created work itself but the aura of the pair. An outsider can’t easily access the world inhabited by collaborators, especially when there are only two. The Knife’s use of masks, Gilbert & George’s uniform of dandyism, Fischli and Weiss’ “Rat and Bear” characters—these fabricated facades contribute to the fantasy projected on them by their audience. They are fictions that we can never get to know in the same way that sometimes we can’t know who did or thought what in a work.

We could measure collaborative success by the inability to detect where one mind ends and the other begins. Back at my friends’ apartment, the paintings of their early years together revealed such two distinct styles that I had an easy sense of who held the brush where. In more recent canvases, the compositions begin to coalesce, the distinctions no longer so clear. And over the long course of their joint career, not only have Gilbert & George become almost indistinguishable from one another, but also their life and art are inseparable.

But not all artistic alliances aim for this seamless union. Partnership takes at least two forms, collaboration and conversation, and in conversation, the pleasure is in witnessing different consciousnesses play off each other. The “ 2 Jewess” millennial best friends of Broad City, klutzy romantic Abbi and libertine stoner Ilana, are a perfect example of personalities in dialogue. One of the joys of watching the show is learning the eccentricities of each woman, quirks so specific that a viewer can point out the guilty mastermind behind whatever deranged caper and say, “Her idea. Completely.”

Partnerships in writing are more rare; initially I could think only of the Brothers Grimm. The science fiction and fantasy genres are packed with collaborations and screenwriters couple up all the time, but the list of literary pairings is slim: W. H. Auden and Mark Twain co-wrote plays and novels with one or two other writers, and David Shields and Caleb Powell recently published I Think You’re Totally Wrong, a quarrel on life and art. There are others, but not many.

Because it’s difficult for me to imagine collective writing, the literary collaborations that most interest me are the ones that happen post-production: Writer and Editor, Writer and Translator. But in the actual process of writing, there is no intermediary between the writer and the audience as there is in collaboration. For me, even talking about a new project feels dangerous sometimes, as though it could lose its power or momentum if I share it too early.

And even after we create the initial work, no matter how much we acknowledge the complexity and significance of editing and translating—arts in themselves—most writers don’t want editors to alter the work. It’s a deep animal-instinct within us. We wish our translators to be as precise and true to our original expression as possible. Writing, certainly in its nascent stage and sometimes even after, can feel anti-collaborative.

Of course, it’s this solitude in writing that fuels my envy of artistic connection. In a fictional collaboration in Lauren Groff’s Fates and Furies, Lotto, a playwright, and Leo, a composer, share moments of feverish creation:

“And then came the prolix period, when they did not stop talking. For four days, now five, now seven. Without really writing anything yet. They worked in a strange twilit limbo…At supper, they sat engaged, tight and thick, and they spoke of their Antigone, whom they called Go, as if she were a friend.”

I know that I idealize sharing the burden of making with a partner, a sunny alternative to having to rely only on oneself to get the job done, but I also recognize the challenge of meeting not only one’s own impossible standards but also another’s. After some days of isolation composing the aria for their operetta, Leo emerges and performs the aria for Lotto. Despite Lotto’s efforts to hide his crushing disappointment—it is nothing like he imagined—, Leo, seeing that he has appalled his partner, stops playing, walks out into the snowy forest in his bare feet, and leaves the residency. His failure to meet Lotto’s vision is so emotionally crushing that they never see each other again.

Through middle and high school I ran cross-country and track. Though I was athletic and competitive as hell, running was the only sport I committed myself to. The butt-slapping clannish-ness of the basketball and volleyball teams was not for me, I preferred the jagged rhythm of my breath as I alone closed the gap between the finish line and myself. But I remember the field day games of my early years, how I ran to partner with a friend for the wheelbarrow race or the three-legged run across the school field, the weight of a thin arm slung around my shoulders, two bodies adjusting its own sense of pacing and equilibrium to create a wholly new and unified one.