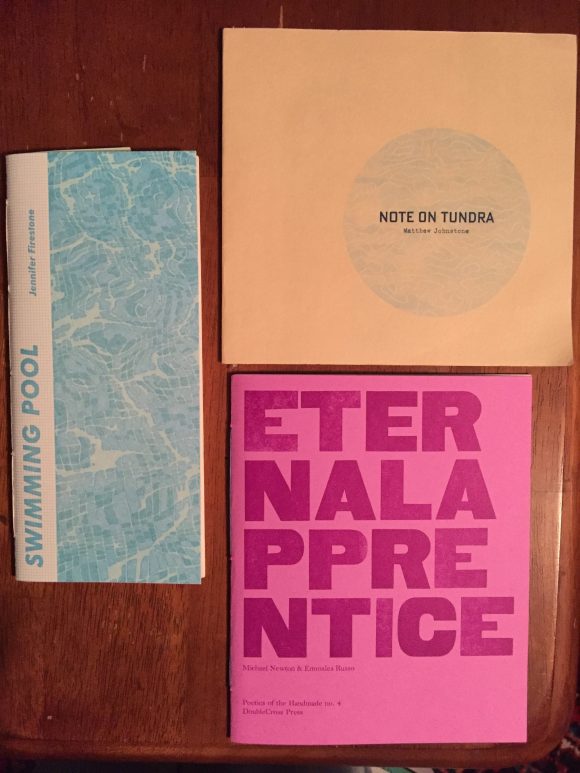 makes gorgeous letter press chapbooks. But these aren’t just pretty faces; it’s what’s on the inside—poetry, poetics and “prose-ish” pieces—that counts. This month, I review three of them. To do so, I not only read them but spent time running my fingers across the textures of their covers, admiring their smart design and classy paper choices, and generally being legitimately impressed at the variety of beautiful things this press put out in 2016. Each of these chapbooks, and others they’ve put out recently, are worth spending time with.

Poetics of the Handmade is a DoubleCross Press series edited by MC Hyland that publishes essays written by “contemporary hand-bookmakers and writers who engage with the handmade book as publishers, promoters, or curators.” Eternal Apprentice is the fourth chapbook in this series, and in it Russo and Hyland address what it means to work as a team on a project. The essay is almost like two people thinking aloud, and it takes different forms. There are direct addresses from Newton to Russo and vice versa, lists, instructions and directives, dialogue, and also the more standard elegant blocks of prose you’d imagine from an essay.

The major theme in this essay is the difference between an apprentice, an administrator, and a creator. The word “apprentice” seems antiquated; today we have “interns” who, more often than learning the trade, run errands and perform menial tasks so that the administrators can perform tasks more smoothly. The apprentices in this chapbook, though, value their labor as it teaches them how to be the next round of administrators. They struggle between what it means to be an editor, to love something so much that this time spent apprenticing is worth it, but to devote time to the creative side of that labor of love: “When we agree to be editors, we choose to occupy the space between creating and publishing, where work (administrative) meets work (creative)” (24).

Anyone who has ever worked on a small press project will relate to Newton and Russo’s essay. It moves from the heavier more philosophical attitudes towards process to the everyday realities of “the small printer [being] broken” (25), “packing etiquette” (18), and “email chains” (18). “Are we better off for all these emails?” (19) they ask. The product of the apprentice, administrator, and editor can only answer that so much. The answer is in the process, in the “perpetual cycle of investment and renewal, an expenditure of energy that yields enough momentum to carry the next round of expenditure. And each round yields a bit of knowledge” (9).

Another series that DoubleCross Press put out books for this year is called Prose-ish. They were looking for work that toed the line between poetry and prose, work that examined the relationship between these two genres. Jennifer Firestone’s Swimming Pool is a series of reflective poems in which the speaker’s musings during her daily swim become poems. They’re titled only on the contents page, each named with the number of the swim, so when you are reading them, you move from poem to poem as a swimmer might turn after touching the wall, fluidly, to the side of the pool from which they started. The book is taller and skinnier than a standard-sized chapbook as well, making the lane metaphor apparent, each poem fitting neatly onto one of the pages.

Firestone’s swimmer thinks aloud her poems during the swims, and they reflect on what it means to be a swimmer, water, public pools, what famous writers have said about water and pools, the video camera watching her, the poem and pool themselves personified, and whatever else might appear in the swimmer’s head as she breaststrokes or backstrokes or freestyles. How much the verse here imitates thought in real time is remarkable, as in here where the speaker moves from a beautifully poetic thought snapped back to reality by the light of a recording device:

Pool water is a blue
you’d call fashion. The video camera
blinks at you as you stay
very still at the end
of the pool.

The poems themselves are fluid as well, as the speaker thinks about fashion the following day as well, “We’re really half-naked, / let’s be frank.” The both impossible difference and sameness of the water she enters is a consistent theme: “Sometimes the pool is / gauze, today it’s human.” The water becomes “the day’s feelings” or “the large hole,” and pools “are really sex / and death and / thinking.” Swimming, though, “is skin,” and the speaker wears it as these poems, showing her swimming, her thinking, through these lanes of page.

Note on Tundra by Matthew Johnstone

DoubleCross press also publishes poetry chapbooks, and these are the most diverse in design—and therefore each is unique. Matthew Johnstone’s Note on Tundra is a delicate book with staggered page sizes so that the title of each work can be seen when you open to the first page. Each is printed in a typewriter font and a different neutral-colored piece of paper, the names of which are listed on the page that also explains the font choices and printing process.

The intricate formatting of this book match both its natural and fragmented tone. The first two pieces, “Preface to Note on Tundra (Departure)” and “Preface to Note on Tundra (Architectures)” are broken in a way that they seem almost like an erasure. They set up the final three poems, all titled “Note on Tundra” by setting the scene: bleak, stark. “come to what is / gone,” Johnstone says, and we do, knowing that we, “animals of / such small / events” are collectively responsible, through complacency, for what is to come because “what is not / learned is to / repeat”—and so we repeat and repeat until we humans achieve the landscape we deserve, one of glass, not one which the landscape deserved. “the earth not become yours only,” Johnstone says in the final “Note on Tundra,” as it ices over.