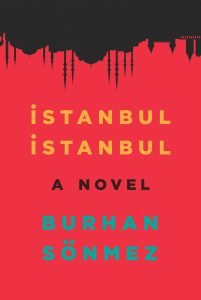 Burhan Sönmez’s novel, İstanbul İstanbul however, suggests otherwise while also suggesting why no one can lay claim to being of the city. In his multi-narrator, multi-story within story tale, four men stuck in the same jail cell in an undisclosed underground location within the city spend more time with their heads in the city than in the jail itself. Why they are each indeed there is part of the mystery of the novel, but Sönmez alludes to the time being the early 1980s, in which arrest and torture due to political involvement was common following Turkey’s third military coup.

İstanbul İstanbul is less about the inhumane conditions of the prison and more about the city itself, and in that the novel succeeds in trailing narratives that loop into one another, but that someone yet again, lead back to Istanbul. As the character known simply as “the Doctor” says, “All stories become the property of Istanbul in here…”, and so his own personal story on how he ended up in the prison, and even the folk narratives that find their way into the novel are also all about Istanbul.

To capture the city so thoroughly though is a feat in and of itself. Just as with Sönmez’s novel, Istanbul defies being pinned down due to its multitudes. Yet Sönmez indelibly captures parts of the city and its inhabitants’ psyche. He describes the curse of “development” in the city that caused “houses …[to] presume to grow vertically in floors and block out the sky” and “square[s to be]… crushed beneath giant shadows” and how most people in the city loved crowds, as that was where “The beauty of the city lay”. Sönmez simply gets what it means to loathe and love the city, which is one large part of what the novel argues makes one an İstanbullu.

There too is the implicit alienation in living in Istanbul, which is a large part of why no one ever feels they can lay claim to the place. Often in Istanbul, one can feel that one has no place, and as the character Uncle Küleyhan says:

“’Istanbul dwellers liked the paintings of Istanbul that they hung on their walls much more than the streets they walked in every day, the rainy rooftops, and the teahouses on the beach. They would drink rakı, recount legends, recite poetry, then they would gaze at the paintings on their walls and sigh. They thought they lived in a different city. …In houses, coffeehouses, and workplaces, Istanbul’s visible face beamed out of the front of the paintings on the walls, while its invisible face remained on the back. Everyone stared at the paintings as though bewitched, and then wended their way sorrowfully to bed. They divided time in two, just as the divided sleep and wakefulness.’”

So much of the city lives outside of their surroundings in an ideal setting captured in a print sold in a tourist shop, or as he later says, in a book that tells of the city’s past, rather than the one that one inhabits every day. For so many of us in Istanbul, it is the past that drives our lives and not the present. Küleyhan and his fellow prisoners are like that too, but perhaps more so in that all they have is their past bound up in endless rounds of stories that will get them through the infinity of the jail. There, time is independent of the driving rotation of the sun or alarm clock that tells one another day has begun.

With so many stories, the only disappointment to İstanbul İstanbul is the ambiguity of the ending, which leaves the reader to decide where, if at all, the characters’ stories end. Sönmez’s gift for nestling so many tales together, many more than one would imagine, much like Istanbul, that has one feeling cut off with the last page. Perhaps this was by design, for as with Istanbul, a narrative is endless. Whatever the case, İstanbul İstanbul is an engrossing read.