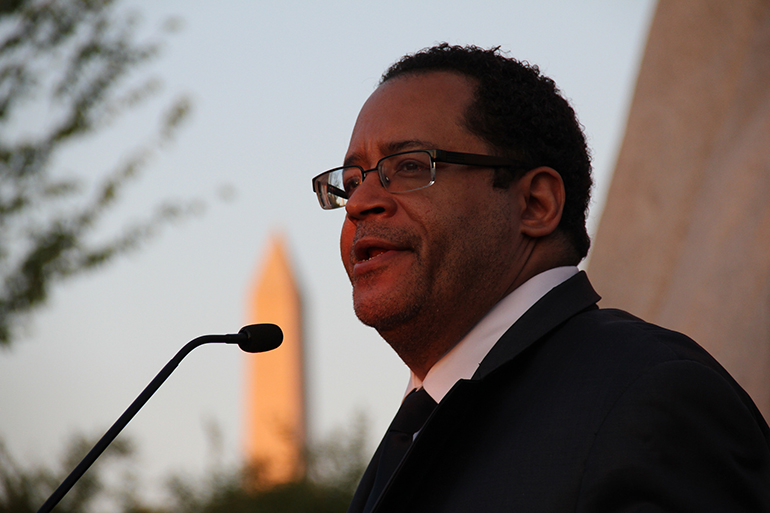 The role of Michael Eric Dyson, Georgetown University sociology professor and cultural and political pundit, in the literary world is a critical one. Not only is his insight pertaining to the economic and social well-being of Black America heavily valued and frequently called on (by the likes of CNN, MSNBC, and C-SPAN) to enlighten the masses, his written catalogue is as diverse as the people he speaks for. His latest book, Tears We Cannot Stop: A Sermon To White America, tackles a slew of sobering topics such as systemic racism, police brutality, and white privilege. As an ordained Baptist minister, Dyson poses the book as a sermon and executes what few writers who address racism can: examine such a disparaging and complex issue in a broader and historical context without making it palatable to those who benefit from its existence.

Dyson’s op-ed for The New York Times entitled “Death in Black and White” was the catalyst for Tears We Cannot Stop. The essay, which was sparked by another murder of an unarmed Black man (this time it was Philando Castile), received thousands of comments and revealed the intense amount of sadness and fear Black folks carry with them at all time. Dyson’s social commentary doesn’t end at confronting state-sanctioned violence. His books have critiqued problematic themes that can be found in hip hop (like misogyny, materialism, and drug use) despite his irrefutable love of the music (Know What I Mean: Reflections on Hip Hop). Dyson also evaluated the Obama presidency (The Black Presidency: Barack Obama and the Politics of Race In America), touched upon the treachery of respectability politics (Is Bill Cosby Right? Or Has The Black Middle Class Lost Its Mind?), and surveyed the aftermath of one of the most devastating natural disasters to affect the lives of Black Americans (Come Hell Or High Water: Hurricane Katrina and the Color of Disaster).

Dyson remains a vital touchstone for the hip-hop community and has written books evaluating its cultural impact (Between God and Gangsta Rap: Bearing Witness to Black Culture) and examining its biggest icons (Holler If You Hear Me: Searching For Tupac Shakur, Born To Use Mics: Reading Nas’ Illmatic). Beyoncé announced last month that she would be releasing the How To Make Lemonade vinyl box set complete with a 600-page book and tapped Dyson to write the forward (he dedicated Tears We Cannot Stop to her, Solange, and Tina Knowles). His proximity to hip-hop and rap music is one steeped in vast knowledge and total authenticity; as a Detroit native, all aspects of the culture was embedded in Dyson’s upbringing and pours into his profession. You can hear its influence in all of Dyson’s sermons; his cadence, vernacular, and energy is what makes him an engaging speaker and strengthens his connection to and influence on Black youth.

Ultimately, it is Dyson’s versatility as a master orator, strategic wordsmith, cultural critic, and fearless activist that has allowed him to speak so candidly and effectively about race. His perspective, which is a rich combination of academic and religious studies with life experience, is one that is sorely needed—especially in the era of Trump. Dyson has always been blunt when expressing his thoughts, observations, opinions, and analyses of such urgent matters that disproportionately affect Black people. And if America plans on making it through the next four years, we will need his voice now more than ever.