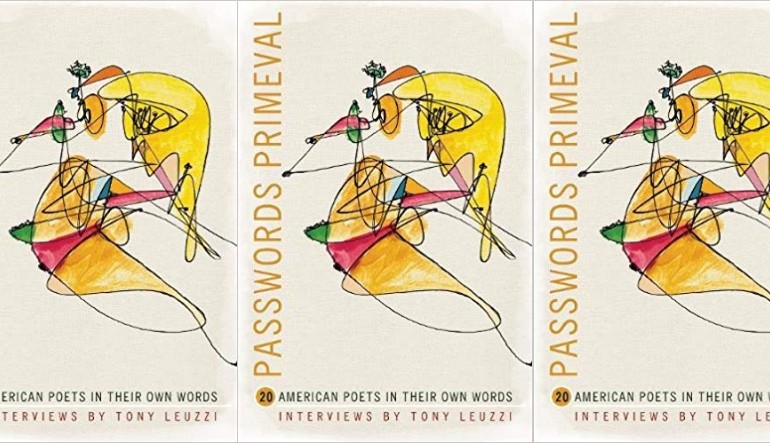 I met Tony Leuzzi a couple of years ago when he came to interview me for the Lambda Literary website and our mutual passion for poets and poetry bonded us immediately. In our interview, Tony asked hard questions about what it means to be engaged with the continual elusiveness of the creative process and why poetry in particular. In other words, he was smart about my work. Boa Editions, the great small press in Rochester, NY, is bringing out a collection of Tony’s interviews (Passwords Primeval: 20 American Poets in Their Own Words) in November and for the occasion, I thought we would change places and I would ask him the questions.

MICHAEL KLEIN: The poets you chose for your book of interviews is a somewhat odd and eclectic assortment of the known and the not so known. What was your selection process, exactly?

TONY LEUZZI: Initially, I contacted poets whose work I admire. Interviewing them seemed like an ideal way to promote them and gain greater insight into their poems via dialogue. However, at the early stages, I was not thinking of a book per se. I was just interviewing them because that is a medium with which I am temperamentally well suited. (I love the action-reaction dynamic of interviews and enjoy drawing writers out this way.) It wasn’t until I’d done about 10 interviews that I began to think I might have a book on my hands. Once I knew that, I began to include writers more mindfully, considering a balance of aesthetic difference first and foremost, but also attempting to provide an adequate mix of gender and ethnic diversity. This was not easy. A few poets I wanted to include either passed or never responded to my requests. Availability was key. In the end, a gathering of 20 poets is not going to adequately represent the richness and diversity of American poetry, so I didn’t even try. My main goal was to eschew “schools” and avoid sole identification with mainstream poetry. I’m thrilled Bin Ramke and Kevin Killian appear alongside Dorianne Laux and Billy Collins. I don’t think many books feature such range in so compact a space (the book is just under 400 pages). Finally, it must be said that I interviewed many more writers than were included in the book. This decision usually had to do with the scope of the discussion but also with balance of representation. Of the twenty poets in the book, three of them are gay males. I couldn’t therefore include more without tipping the book in a noticeable way towards a “specialized” angle. As a gay man, I struggled with that decision. I mean, does anyone question the existence of more than three straight men in a general-interest anthology? I really, really struggled. I erred—rightly or wrongly—on the side of caution and market viability. Finally, some of the unused interviews were put aside because the poets I worked with beat me to the punch and used them in their own collections! I could hardly be upset with such good fortune.

MK: Your interview with Billy Collins – the most well known person in the book – interestingly enough, is the shortest interview and I noticed a real variety on the lengths of the other interviews as well – some long, some short – was this something you decided in the editing process or something both you and the poet came to decide together?

TL: Yes and yes. Billy and I actually discussed the brevity of his interview in relation to other poets’ interviews in the book, but we both decided what he said was clear and memorable—a lot like his concise, accessible poems—and didn’t need much augmentation. He is the only writer in the collection who I interviewed in front of an audience for a restricted amount of time. As a poetry star, he is less available than other poets and has to be approached through agents, etc. I was lucky to get any time with him at all. I was even luckier to work with him after the fact via email. Martín Espada is another comparatively short interview. Why? We met for an hour and he spoke beautifully in fully formed paragraphs. No interview I did needed less editing than his after transcription. It was basically gift-wrapped. On the other hand, Jane Hirschfield’s is one of the longest in the book. She welcomed my encouragement to develop written answers as well as spoken ones. And, despite the terseness of many of her poems, she is quite expansive in her explanations. Gerald Stern’s interview is long, too. And it’s only about a third of the actual discussion we had. I literally ran out of tape! In short, the length of an interview depended on the availability and temperament of the poet.

MK: You mention in your dedication Ai and Rane Arroyo as two poets “who should be here.” What other poets do you think should be here, but aren’t either because they aren’t living or weren’t accessible?

TL: Great question. Poets who should be here but aren’t because they have died are Stanley Kunitz (I got Stern to talk about him quite a bit as compensation); Tim Dlugos; Adrienne Rich; and June Jordan. There are others but these are people I regret not getting to meet and speak with.

The list of unwilling or unavailable participants is not as long as you might think. Most poets welcomed the opportunity to talk. However, there are a number of key absences. C. K. Williams hemmed and hawed and then said no. I struck up a wonderful rapport with Brigit Pegeen Kelly via telephone and we chatted three times. A transcript of those conversations would have been amazing. She is so articulate and sweet! But she is an extremely private person and made it clear she did not want inclusion. Kay Ryan and Brenda Hillman declined through their agents.  Louise Glück doesn’t like doing interviews so I didn’t even ask, though it pained me not include her. I’d also love to get a conversation with Sharon Olds. Such great poets! I would have loved any one or all of them to be included. Here’s hoping I can get some or all of them for a second edition.

MK: What was your process? Did you have questions already written or were these more like conversations? My sense is that you did do some pre-planning – but with interviews, it’s hard to know what gets left in and what gets taken out. Was it an exhaustive editing process?

TL: I did A LOT of pre-planning. I read all of each poet’s poetry and nonfiction. That would take anywhere from 3-5 months. Then, I would generate 10-15 questions. If we met in person, new questions would come spontaneously. If we first encountered one another through email, an ensuing phone conversation ensured that there’d be some spontaneity. Dorianne Laux said, “it’s like you’re taking a course in all of these poets.” I did—and I loved it.

Editing was quite involved but it’s hard to discuss a process for it because it was going on in so many stages. There was the editing I would do after transcribing conversations; then there was the editing I would do after receiving written comments; there was the editing I would do after I collated the conversations with the written responses. What’s more, poets always got to look at the interview before it was finished, so all of what you read was officially approved. There was a bit of negotiation—take this out, put this in—that sort of thing. Then, once I gathered all 20 interviews together, further editing took place when BOA Publisher Peter Conners and I worked on the collection. So yes, extensive. No editing is ever exhaustive, however. I think at some point you just say, “it’s done.” And walk away from it.

TL: I will try to answer any good faith question. But once, in response to reading poems from Fake Book, a collection of my poems you blurbed last year, you said, “Tony, so many of your love poems are sad. Why?” I didn’t really know then and I still don’t know now, but that question stayed with me. I have some possible answers for it (outside the scope of this interview) but like all great questions, it is larger than any answer I could give. I like getting stumped. I like having to turn something over for years and years. So, thanks Michael. You stumped me!