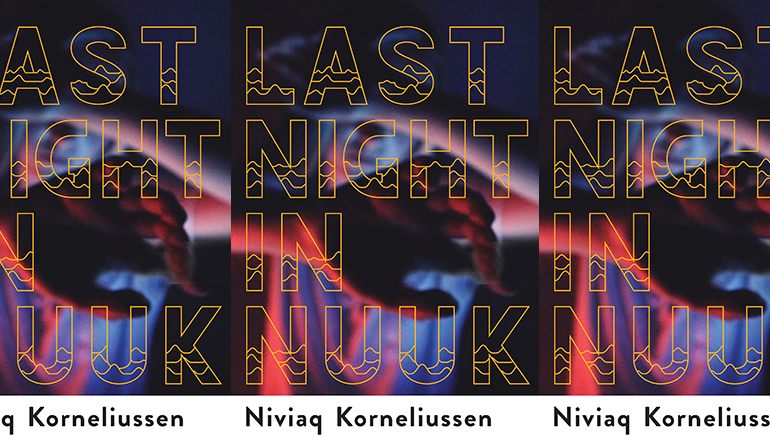 When I think of Greenland, I imagine my father’s black and white photos from the Army. In every single one, he’s standing outside of a tent, surrounded by snow, looking very cold. It seems bleak. The novel Last Night in Nuuk, by Niviaq Korneliussen and translated by Anna Halager, which is set in Greenland, is, however, anything but bleak. It is instead a novel that gripped me from the very first page with its intensity, freshness, and humor. The novel is short, only around two hundred pages, but it moves like a bullet: powerful, emotionally dense, and over much more quickly than I wanted it to be.

Last Night in Nuuk explores the lives of five queer Greenlanders on the cusp of adulthood, trying to figure out who they are and who they want to be—and be with. The novel’s first chapter, of five, focuses on Fia, who’s in an unhappy relationship with Peter. He’s so kind and good to her—she doesn’t know why she doesn’t want to be with him. She describes her relationship: “Dry kisses stiffening like dessicated fish. Bad sex should be avoided at all costs. My faked orgasms get harder to believe as time goes by. But we’re still making plans.” Then it gets worse. “What keeps me alive is dying. My life has become worn, aged. Life? What life? My heart? It’s a machine,” she says. Her story ends up being both a love story and a coming out story once she meets Sara.

The chapters that come next follow Inuk, Fia’s brother, who left Greenland in shame when Arnaq reveals a secret about him. Arnaq’s chapter begins with a “walk of shame” after an extremely drunken night—the “last night” of the title, or one of them. Arnaq, coming in the middle of the book, glues the five main characters together. Her actions affect everyone, and though she’s often drunk and selfish, her mistakes push the others toward their future selves—the selves they’re searching for. Ivik, coming fourth, and Sara, fifth, round out the novel, bringing us back to Fia and Sara’s love story.

Within the chapters, each of which is named for a different song, Korneliussen plays with form. In chapter two, for example, the reader gets Inuk’s story through first person narration, letters to and from his sister, Facebook posts, and even a quiz he creates and sends to Arnak to fill out. “Did you achieve what you wanted to when you ruined my life?” and “Are you a heartless bitch?” he asks. Beside each question is a box where Arnak can check yes or no. Ivik’s chapter utilizes first person narration and text messages. Sara’s narrative, which begins with the birth of her niece—who Sara does not feel worthy to touch—gives us time stamps, more text messages, and hashtags.

There’s an earnestness to Last Night in Nuuk that would be cheesy in another book; wrapped in Korneliussen’s prose, however, it works. Take, for example, when Fia writes out song lyrics and gives them to Sara to express her love. Alone, this act might seem cloying or adolescent, but Korneeliussen’s details transform it: this action happens after Fia smokes cigarettes but doesn’t wash her hands, despite knowing that her boyfriend hates the smell. Fia falls in love with Sara at first sight, but afterward, because she can’t have Sara right away, she sleeps with a random guy then pretends she has to puke when he wants to have sex again. At her most joyful, Fia says, “What a day to realize I’m not dead.” It’s this deadpan reaction to her bliss that keeps the novel from being heavy-handed or cliché. Together, these five voices form a story of tenderness and courage that comes despite the hedonism of their youth, or maybe because of it.

Even in the darkest times of one’s life, when friends humiliate us, when our lovers cheat, and when we feel most alone, Last Night in Nuuk tells us to remain optimistic: hope can “return from the dead, popping up like the devil.”