Home
»
Reading
»
A Castle in Our Backyard: Activating Imaginations in Ireland 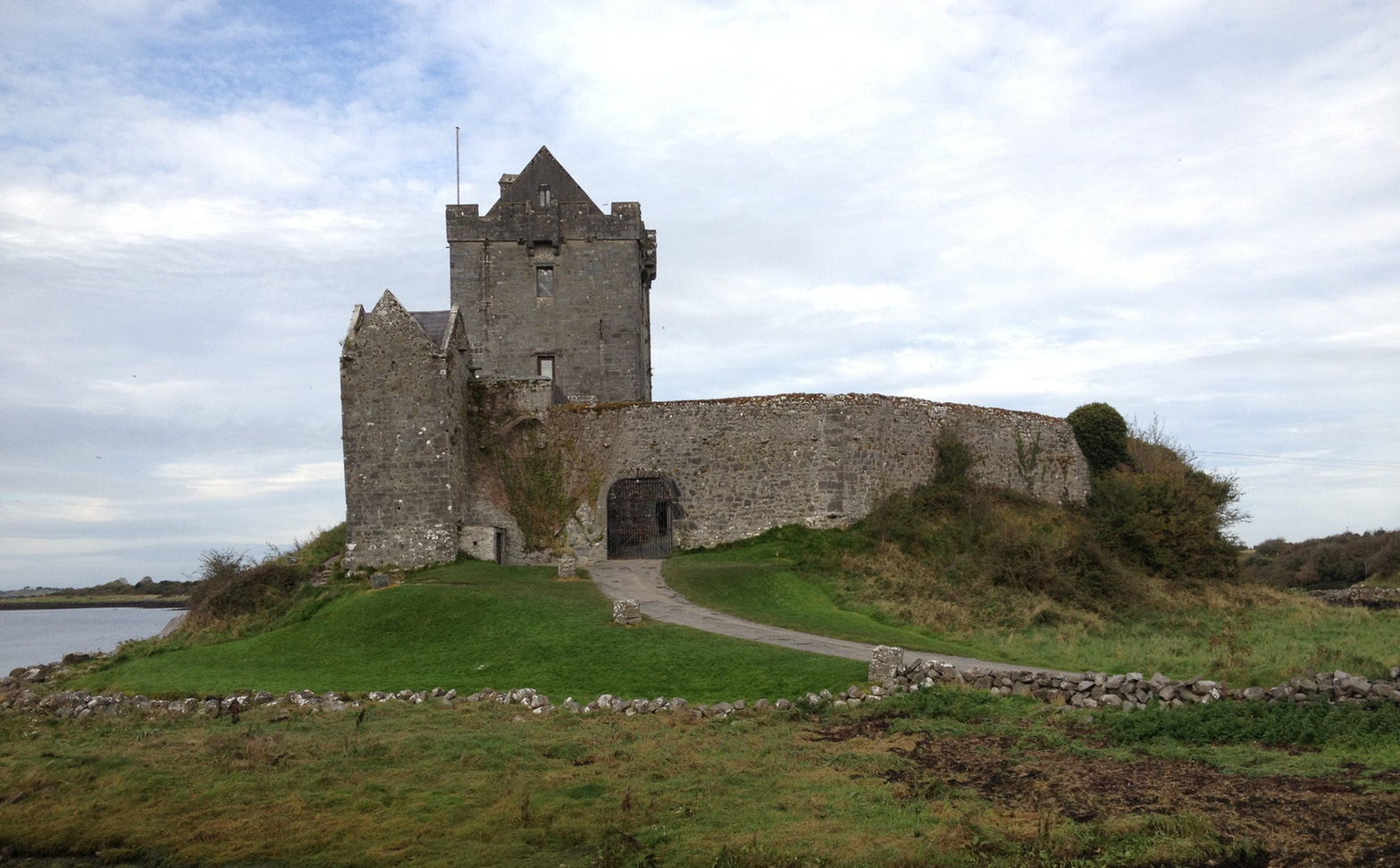 The fiction writing workshop I’m teaching for Spalding University is winding down the day I discover that, behind Oyster Lodge, where our classes meet, at the end of Galway Bay, there’s a small castle.

I’m satisfyingly tired after exploring Dublin and Galway through the lenses of their literature and art: a walking tour of James Joyce-related sites in Dublin while tour buses passed us blasting the ubiquitous “Molly Malone”; an hour standing in line to get into Trinity College’s old library to see the Book of Kells, an illuminated manuscript of the four gospels of the New Testament created around the year 800; an international film festival in Galway; the excitement of my poet friend Debra Kang Dean when she found bog cotton, an image from a favorite poem, at the ruins of the old monastery Glendalough.

We’ve discussed Yeats and Joyce and contemporary Irish writers, examined statues of emaciated famine victims by the Liffey, stopped to watch street buskers perform reels and jigs, hired bikes to cycle around the periphery of Inis More Island. Along the way, we’ve eaten potatoes, potatoes, potatoes, mashed, French fried, new potatoes, Taytos Chips, sometimes three kinds in one meal as if the Irish are determined to restore to us all of the potatoes our ancestors were deprived of during the famine.

We’re all a little worn out, but there’s a castle only steps away, and so my students and I quickly devise a setting exercise and go to wait for owner Leonie Finn to meet us at the gate for one of her hourly tours.

Welcoming us, she tells us that Oranmore Castle is a fifteenth century Norman tower, one of many that were built along Galway Bay. From the roof, you can see the ruins of others, she says: “Everyone’s always trying to prove their castle is the earliest one.”

We enter through a heavy wooden door with rope pulls into a room with uneven lime-whitewashed stone walls, six feet thick. When Finn’s mother, writer Anita Leslie, purchased “this castle. . .with its acre of land along the seashore” in April of 1947, as she wrote in a note on display, she added a fireplace to this unheated room that was once used to store food, weapons, and livestock.

Now the Guard Room is crammed with antiques, including an elaborately carved altar from a nearby church, carved Spanish chests, and a seventeenth century French tapestry that needs to go to Brussels for repairs.

Throughout the castle are things Finn and her family have collected: trunks, busts, carvings, an old mandolin, and stuffed birds under glass, originally used by English schools to teach drawing but eventually banned by the health department because they contain arsenic.

I’m intrigued by details like the “murder hole” for pouring boiling oil on the heads of enemies, but I’m even more fascinated by the fact that Finn grew up in this castle and still lives here, like a character out of Dodie’s Smith I Capture the Castle, her own history layered over the long history of this place that has housed and nurtured the imaginations of her mother, a writer; Finn, who has an etching studio out back; her husband, a musician; and her daughter, a textile artist.

“Sometimes in the winter, when it’s cold and the tide is high and everything’s leaking and flooding, I just want an apartment,” says Finn as we climb steep stone steps that seem to have been carved for tiny feet. Moss grows on the walls, a “Mind Your Head” sign hangs above us, and the only railing is a piece of rope.

“I’ve slept in every room,” Finn tells us as we tour spaces that have been turned into bedrooms: a room that served as soldiers’ quarters and features a slop stone that soldiers used to dump the remains of their dinners so they ran down the side of the castle and into the sea; additional bedchambers with plants growing in the ceiling above the window; the banquet hall with a short carved canopy bedframe from 1656 that had to be brought up on rope pulleys; the tower, with a net on the bed, not for mosquitoes but to keep out bats.

“When the grandkids come to visit, we don’t have to make beds,” she says. “We say, bring sleeping bags and it’s up to the tower you’re going.”

She shows us the castle’s sanitary shaft, a sort of laundry chute once used to dispose of human waste, and a hole in the wall of the banquet hall that might have been a dungeon. “As kids we lowered ourselves down on a tray with candles,” she says.

In her note about castle renovations, Anita Leslie wrote, “Only the plumber and the electrician remain hammering and the eggs are hatched and fat fledglings fly out. . . “ I love that picture of those birds, new life in an old castle, and of children exploring a stone shaft on shaky trays. As our group exits the castle, mustiness replaced by the briny smell of the bay, we head back to Oyster Lodge to write, our own tired imaginations newly activated by old treasures that remain living things.