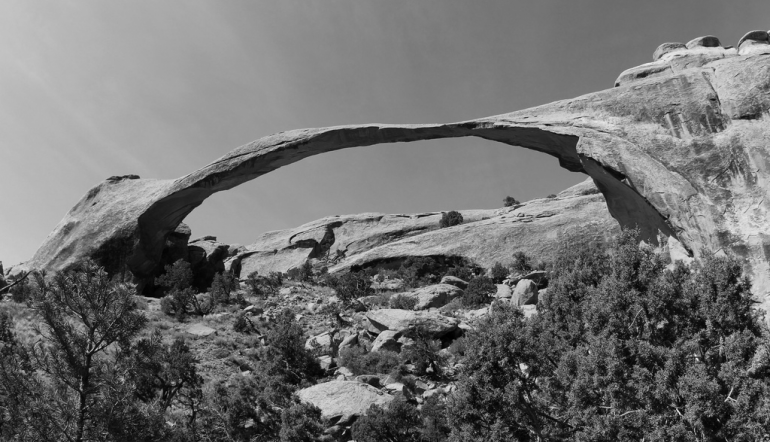 January 2018 marked fifty years since Edward Abbey published his paean to America’s southwestern deserts, Desert Solitaire: A Year in the Wilderness. This book recounts Abbey’s two seasons as a National Park Service ranger at Arches National Monument in the late 1950s. Among other things, Abbey argues on behalf of the desert’s stark beauty and against modernity’s influence on humans—specifically, that it alienates us from the natural world, thus blinding us to the perils of an unbalanced environment.

In the wake of this anniversary, numerous tributes to Abbey and his books appeared, reflecting at length on the importance of his writings. Few, if any, of these articles, however, look at Abbey’s work through a feminist lens. If we sing Abbey’s praises, we must equally highlight what he gets wrong: wilderness is not gendered, and it is detrimental to us all to anthropomorphize nature as a feminine and racialized object to rescue or conquer.

Although Abbey’s intent was to preserve wilderness by spreading the gospel of conservation, the sexism and racism (the latter of which is more often documented than the former) in his writing works against his cause: writing about the natural world as a sexualized, commodified feminine entity that needs rescuing girds the interpersonal and institutional racist, patriarchal power structures in our country. It tacitly endorses “manhandling” of wilderness for human gain, like what we have seen in the recent government rollbacks of the Grand Staircase Escalante and Bears Ears national monuments, which the current administration is auctioning off to the highest bidder for mining and oil extraction. This type of possession of wild lands is the opposite of what Abbey wanted, but when people—specifically white people—yearn for possession, they assert their power.

I have a complicated history with Abbey’s work. I first read him in 1989 when I was a twenty-three-year-old rookie interpretive ranger at the south rim of Grand Canyon National Park. My boyfriend, Darren, adored Abbey, so I picked up Desert Solitaire to see what the hype was about. Despite identifying as a feminist, I was swept away by the adventure and romance of Abbey’s love song to the desert. I swooned at his tributes to secret red-rock canyons and agreed with his sentiments about the urgency of preserving wild lands. But his two-dimensional portrayal of women, in which their role is to serve as sexualized objects owned by men, deeply disturbed me.

Abbey routinely describes the natural landscape as a commodified feminine figure and directly asserts the belief that women are to be “possessed.” To describe the beauty of Utah’s Arches National Park, for example, he announces:

Gaping at this monstrous and inhuman spectacle of rock and clouds and sky and space, I feel a ridiculous greed and possessiveness come over me. I want to know it all, possess it all, embrace the entire scene intimately, deeply, totally, as a man desires a beautiful woman.

When rafting the Colorado River through what is now Glen Canyon National Recreation Area, Abbey proclaims his fealty to Mother Earth but also declares his (perhaps Oedipal) “hunger” to consume her, in the same way he feels that “golden women” await his appetite in paradise:

The love of wilderness is more than a hunger for what is always beyond reach; it is also an expression of loyalty to the earth, the earth which bore us and sustains us, … the only paradise we ever need….

… When I write “paradise” I mean not only apple trees and golden women but also scorpions and tarantulas and flies, rattlesnakes and Gila monsters, sandstorms, volcanos and earthquakes, bacteria and bear, cactus, yucca, bladderweed, ocotillo and mesquite, flash floods and quicksand, and yes—disease and death and the rotting of the flesh.

It’s clear that Abbey feels the wilderness is his to desire and possess. The wilderness, to Abbey, is also unmistakably female and available for such possession by men. Take this description of his summertime daydreams in Arches:

I idle away the hours dreaming of the wonderful winter to come, of the chocolate-colored mistress I’ll have to rub my back, the journal spread open between two tall candles in massive silver candlesticks, … the nights of desperate laughter with brave young comrades, burning billboards, and defacing public institutions…. [ellipses in original] Romantic dreams, romantic dreams.

Here again, a woman is sexualized, an anonymous provider of intimate services to men, exclusively for his pleasure. I also cannot imagine that Abbey’s “brave young comrades” are anyone but men, implying that Abbey does important, political work with men while sexual labor is reserved for women—“chocolate-colored” ones, apparently.

Perpetual harm occurs when men who endorse such sexism and racism are eulogized without qualification or reflection. That is, if we extoll only the virtues or the message of the art without acknowledging the artist’s unacceptable treatment of women and people of color, we normalize misogyny and racism by tacitly endorsing it, and future readers may accept and internalize such ideas instead of questioning or rejecting them.

But, still, Abbey’s message is often trenchant, and the writing is often beautiful. How do we reckon with these contradictions in ourselves and in the work of our literary heroes? Is it worth the trouble to explore these liminal spaces?

I asked these questions of myself while camping in a remote section of Arizona at the tiny primitive campground of Navajo National Monument that Abbey portrays in his eco-warrior novel, The Monkey Wrench Gang. Abbey’s three main characters, Bonnie Abbzug, Doc Sarvis, and George Hayduke, camp there while plotting and enacting an elaborate plan to blow up a nearby coal-conveying bridge in the name of environmental justice. I pictured Abbey himself camping exactly where I had placed my sleeping bag, writing by moonlight as he sat at the very picnic table upon which I had boiled spaghetti noodles. But I also thought of my revulsion for Abbey’s tired tropes: the male gaze, the male desire to possess women, the male need to possess the wild. How did I reconcile Darren’s fervor for Abbey’s work with my own feminism? I didn’t: our relationship didn’t last.

Can we accept the rationale that Abbey was a product of his time to excuse his sexist writing? I think not. If achieving equality among all people is our goal, we must acknowledge the sexism, chauvinism, and racism of male writers, both living and dead. Glorifying Abbey’s work without acknowledging his bigotry makes us complicit in perpetuating the unequal power structure that allows writers like Abbey to denigrate women and people of color.

What Abbey valued in wilderness remains important, but real wilderness is gender-neutral. If we downplay Abbey’s sexism and objectification, we not only risk women’s rights to dignity, respect, and self-determination but also encourage a hypermasculine view of wilderness, which inevitably results in the continuation of widespread exploitative and abusive treatment not only of people but also of wild lands and the environment at large.