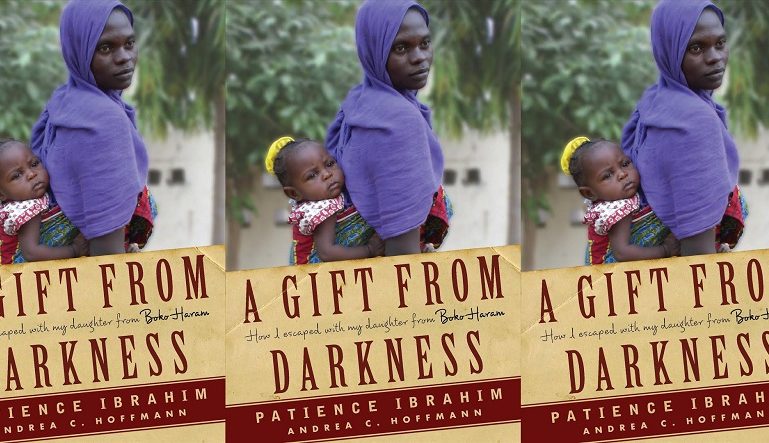 A Gift from Darkness: How I escaped with my daughter from Boko Haram
Patience Ibrahim & Andrea C. Hoffman
Other Press | January 23, 2018

A Gift from Darkness: How I Escaped with my Daughter from Boko Haram is a powerful and moving tale of female resilience. Patience Ibrahim, who was kidnapped by Boko Haram twice, tells her survival tale to Andrea C. Hoffman, journalist and author of The Girl Who Beat ISIS. Ibrahim carries us through her harrowing experiences with men in and out of Boko Haram, and details how she escaped terrorist captivity more than once with her daughter, Gift.

After learning about the kidnapping of the Chibok schoolgirls by Boko Haram, Hoffmann embarks on a journey to interview other female survivors. She heads to Maiduguri, a Nigerian city about eighty miles north of Chibok and home to a large EYN Church, which “is the most important meeting point for Christian refugees from the whole region.” Hoffmann meets Ibrahim, a young refugee mother, and asks to document her story.

After her first husband was murdered by Boko Haram, Ibrahim tells us, she was outcast by her family: her new status as a widow made her a “damaged” consumer good within the male-catered barter/marriage system. While her father negotiated with her soon-to-be second husband over the price of her livelihood and womb, Ibrahim says she found herself thinking:

I was furious that I couldn’t be there myself and had no say in the matter, while they horse-traded over my future. By now Ishaku was bound to have found out that I was a widow. Would it put him off? Or would he be pleased that it gave him the opportunity to lower the price?

She remarries, though the protection marriage offers doesn’t go far: shortly after she realizes she’s pregnant, she is captured by Boko Haram. When she escapes, her husband belittles her for the acts of violence inflicted upon her during her captivity, as does her community:

The whole camp was talking about us kidnapped girls—and imagining what the men had done to us. That meant that we were being abused twice: once by our abductors, and many more times in the heads of the people who talked about it for their own secret amusement.

Shortly thereafter, Ibrahim is captured again and witnesses the violence inflicted upon non-Muslim men and women. While the Christian men, she says, are often killed immediately if they do not convert to Islam, the women are used as birthing vessels to bring more Boko Haram members into the world. If a woman refuses, she is killed. Reflecting on another kidnapped woman in her camp, she says, “I understood that she was terribly afraid, like all other prisoners: Muslims and non-Muslims alike were afraid of the unpredictability of the men with weapons and their love of violence.”

Ibrahim shows compassion to those men and women who join Boko Haram, seeing in them victimhood and helplessness; she sees the ways in which men conform to the expectations of Boko Haram to avoid execution, even if it meant they had to abandon all their former beliefs. She escapes with the help of a Christian man who converted to Islam for survival who, she says, “was just as much as a prisoner as the rest of us. He had to obey the orders of the superiors.”

Upon her escape, Ibrahim becomes a refugee in neighboring Cameroon. Here, she is widowed a second time. Even so, she pushes on and finds comfort and strength in five other women who have also just lost their husbands at the hands of Boko Haram. Together they make the journey to Maiduguri in hopes to reconnect with loved ones.

A Gift from Darkness is a small glimpse into the violence that Boko Haram inflicts upon men and women in North Africa. Hoffmann weaves historical and cultural context throughout, allowing the reader to piece together Ibrahim’s nuanced experiences within larger narratives of gendered violence playing out both in the region and throughout history. Hoffman speaks to Asabe Kwambula, the headmistress of the school from which the Chibok girls were kidnapped, and Kwambula states, “As women here are traditionally seen as the ‘possessions’ of men, in cases of conflict, they try to take them away from their opponent in order to weaken him.” As men engage in conflict, women’s bodies are bought, sold, traded, and murdered as acts of war in efforts to retaliate against men on the opposing side which is enacted not just within spaces controlled by Boko Haram, but worldwide.

A Gift from Darkness gives us a look into the unwavering determination of one woman whose story reflects the experience of many women at the hands of Boko Haram. Firsthand accounts of abuse, trauma, and refugee experiences bring insight and compassion to a readership, leading to more effective ways of addressing the needs of the people affected both in this region and various populations around the world. With a book as moving as this, we can see there is no substitute for the power of allowing survivors of trauma to tell their own stories.

Hillary Hassani is a Women's & Gender Studies scholar and advocate.