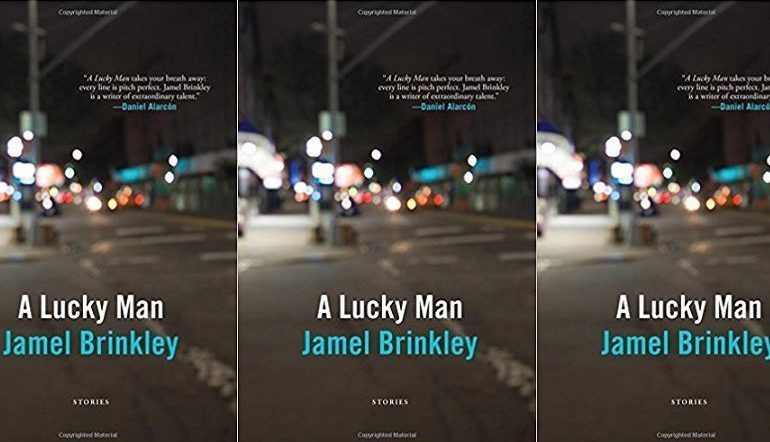 There’s something magical about a great story collection. The stories bump up against each other and speak to each other, as well as to the reader, creating a whole that’s significantly more than its parts. In A Lucky Man, Jamel Brinkley’s stunning debut collection, the stories are not formally linked, and yet they are, implicitly, by their beautiful prose, by their intimate gaze at character, by their focus on black men, by their setting in New York City. These are stories that can be read again and again because each time through, the reader learns a bit more: about the characters, about the world, and about themselves.

The nine stories are roughly arranged in a timeline, stretching from the mid-1990s to the present. Using both close third-person and first-person points of view, Brinkley examines what it is to be black and male in America. His protagonists range in age from nine-year-old Freddy in “I Happy Am” to college students in “No More Than a Bubble” to a middle-aged man in “A Lucky Man.” This creates a prism of sorts, as we look at the same world through different eyes. In “Clifton’s Place,” which closes out the collection, a primary theme is the passing of time, and the architecture of the book reflects that theme as well.

The collection will rightly be compared to Edward P. Jones’s story collections, and Brinkley’s stories also bring to mind the work of William Trevor and Yiyun Li. This is mostly due to the respect that Brinkley has for his characters and his deep interest in portraying his characters honestly. Trevor said, “Each character is somebody that I know very well—as well as I know myself.” Brinkley could say the same, I think. These are real people on the page, characters that we root for and believe in, characters that are searching for answers to questions that they may not yet fully understand.

Often, Brinkley’s characters are a bit on the outside, looking at a world that seems somewhat unknowable and unknown. “A Family” opens as Curtis, back home after being incarcerated for twelve years, follows his old friend Lena and her son Andre during a rainy Friday night, getting close enough to hear their conversation, but not enough to be seen. In “I Happy Am,” Freddy is on a trip with his summer day camp, exploring the home of a stranger. And in “No More Than a Bubble” and “Infinite Happiness,” each narrator has a friend who always seems—to the narrator, at least—a step or two ahead.

This sense of a journey—of following a path, often circuitous and winding—is a central theme throughout the collection. The characters are often searching for an understanding and a connection, and that emotional journey is reflected in the ways the characters move through their physical worlds. There’s a restlessness here, in the way that the characters are always on the move, never quite at peace in the moment, an innate understanding of the boundaries that resist exploration. “He was terrible at idleness,” the narrator says of his friend in “No More Than a Bubble,” “much worse than I was, and could quickly lose his way. Without an exact destination, the map of his life had no significance or shape.”

The idea of a map appears in a number of these stories. A map, after all, is a representation of the world, one that is clearly connected to both journeys and boundaries. Fiction functions in a similar fashion. A wise writer once told me that every great short story is about writing. That is the case here, in every one of these stories. You can feel Brinkley’s keen interest in craft, in developing characters that are full of life and stories that are layered with meaning. At times, the connection between writing and the story is made plain, as the space between the narrator and the writer shrinks. “Everything the Mouth Eats” begins as follows:

I’ve started this story many times and deleted the pages many times. The reasons aren’t a mystery. I keep seeing the face of my brother, to the exclusion of anything else, and I keep getting lost. But perhaps there’s no other way it can be written.

At other times, the connections are more subtle, the reflections on language more metaphorical. In “Wolf and Rhonda,” where the point of view shifts between the two characters, Rhonda listens to Wolf speak and thinks “He kept going on about his memories, laying them out like an arrangement of stones. His words piled on themselves in a strange rhythm. They formed walls that he could take shelter in.” And the world of the imagination is one that many of these characters retreat to, as they seek to find answers but also as they create parallel worlds, worlds that they can control and worlds which they can be free to explore.

There is a gentleness and a kindness that runs through this collection and, even though we learn how difficult it is for these characters to live in the real world, there is a thin thread of hope that love is the thing that will allow these characters to persevere. “A Family” ends with Curtis and Lena together: “He and Lena wouldn’t love each other, but there was love they openly shared, and that would be enough, for now, to make a kind of family.” In “Clifton’s Place,” the protagonist, Ellis, reflects that “All of us should be loved, he thought again. No matter what, even if it’s just for one night.” A collection as fine as this, of fiction that is reflecting our world and searching for the truth, is one to be treasured, read and reread, admired, and loved.