Home
»
Critical Essays
»
A Map of Belonging: China Miéville’s The City & The City 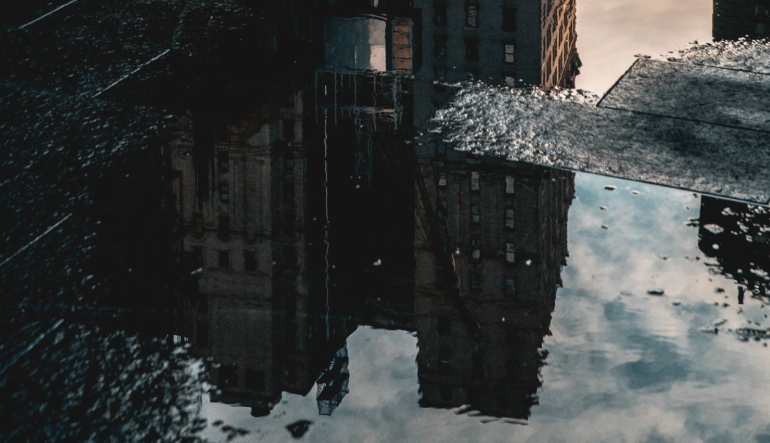 China Miéville’s The City & The City traces the geography of two cities overlaid onto one another. If not for the title and jacket copy, though, the surreal relationship between the cities, Besźel and Ul Qoma, would unfold somewhat by surprise, since the protagonist Inspector Tyador Borlú does not direct his attention toward the relationship of the two until forced to do so by a murder investigation. The first hint of a fantastical element in the novel might not even be worth note, if not for how the story evolves:

An elderly woman was walking slowly away from me in a shambling sway. She turned her head and looked at me. I was struck by her motion, and I met her eyes. I wondered if she wanted to tell me something. In my glance I took in her clothes, her way of walking, of holding herself, and looking.

With a hard start, I realized that she was not on GunterStrász at all, and that I should not have seen her.

Borlú goes to the trouble of “unnoticing” the woman, with no explanation or further elaboration until later. Still, because he is a cautious thinker who walks through scenarios with great care, readers inherently trust his judgement. When he shares what he knows and believes, readers generally go along with it, even when he is in error—and readers’ own better judgment might have led them to notice as much sooner.

Miéville introduces instances of “unnoticing” that require greater and greater effort to achieve. In some cases, for example, two houses side by side belong to two different cities, yet the neighbors never interact and, in order to visit one another, would have to pass through an embassy with proper identification and permission! When Inspector Borlú travels from Besźel to Ul Qoma to work with Detective Qussim Dhatt on the murder investigation, he then must unsee his native spaces and see the very things he could not notice before.

Yes. I looked at what Dhatt showed me. Unseeing, of course, but I could not fail to be aware of all the familiar places I passed grosstopically, the streets at home I regularly walked, now a whole city away, particular cafés I frequented that we passed, but in another country. I had them in the background now, hardly any more present than Ul Qoma when I was at home. I held my breath. I was unseeing Besźel. I had forgotten what this was like; I had tried and failed to imagine it. I was seeing Ul Qoma.

If anyone does attempt to interact too directly with the other city, the consequences are immediate and severe: an entity fittingly known as Breach secures the area and removes the people who “breached” from one city to the other. Most such people are never seen or heard from again, as Inspector Borlú explains when recounting cases that crossed that line:

The second case was a man who had killed his wife, and when we closed in on him, in stupid terror he breached—stepped into a shop in Besźel, changed his clothes, and emerged in Ul Qoma. He was by chance not apprehended in that instance, but we quickly realised what had happened. In his frantic liminality neither we nor our Ul Qoman colleagues would touch him, though we and they knew where he went, hiding in Ul Qoman lodgings. Breach took him and he was gone too.

The story’s structure, then, is designed as a puzzle and an invitation to readers: Are there really two separate cities here? Are these fantastical or grounded spaces? What about the spaces in between? To force the Inspector into a situation that answers these questions, Miéville introduces into the plot a woman who was murdered for trying to find a third city between the others, not Breach but a mythical place called Orciny.

What’s so interesting about this particular puzzle, though? What’s the “so what” factor here? It has to do with how all human communities seem to inherently divide their citizens into separate classes, often people who live side by side without understanding how vastly different their experiences of the same geographical spaces are. Miéville doesn’t explicitly call out, for example, how homeless individuals and families navigate cities compared with people in more stable homes, but the comparison is right there under the surface of the economically depressed Besźel alongside the thriving Ul Qoma.

Once readers notice this uncomfortable theme, another question naturally emerges: Who and what maintains the separation between one person’s experiences of a place and someone else’s? What happens when the borders fuzz together, when one person crashes into another?

The City & The City is billed as a fantasy novel, but, once read, there is no inherent reason to believe these are other than two wholly real cities pieced and parceled out in strips—often even with citizens walking along the same roads and sidewalks, studiously not noticing one another. The habits and cultures of the people serve as the primary barriers between the two. Government bureaucracy and the secretive Breach operatives ensure that anyone who tries to push back against these otherwise seemingly arbitrary barriers will be punished. Mahalia, the murdered woman, “once said the whole history of Besźel and Ul Qoma was the history of the war between Orciny and Breach,” claims one of her former schoolmates. “Besźel and Ul Qoma were set up like chess moves, in that war.”

What’s true and what isn’t about the relationship between these cities and the shades of grey between them? It’s difficult to ever quite pin down the “real” construction and layout, and the matter is only complicated further at end of the novel, when Miéville pulls apart all the barriers and calls into question the very construction he introduced in the first two-thirds of the book.

Ultimately, even though this novel reads like a fantasy, it becomes disconcertingly real by the end: A woman is murdered for not treating the borders of the cities as sacred, however constructed they are. Likewise, her murderer evades capture and nearly escapes on the same principle—by using the in-betweenness of the cities to his advantage, pretending to belong to both simultaneously, so that neither city has jurisdiction over him.

[The murderer] was instantly visible. That gait. Strange, impossible. Not properly describable, but to anyone used to the physical vernaculars of Besźel and Ul Qoma, it was rootless and untethered, purposeful and without a country. I saw him from behind. He did not drift but strode with pathological neutrality away from the cities’ centres…

How expert a citizen, how consummate an urban dweller and observer, to mediate those million unnoticed mannerisms and marked out civic specificity, to refuse either aggregate of behaviours.

Through a combination of bureaucracy, habit, and cultural norms, the people of the two cities fail to mete out justice, forcing Inspector Borlú to deliver justice in the grey area in between, something he can only do through the personal sacrifice of giving up his ability to return to his home city and all his relationships there.

On a broader level, Borlú’s sacrifice can be recognized as one that many individuals make when they try to “bridge” cultures or social groups. Often, such individuals are left feeling as if they don’t belong anywhere because they can’t unsee what they used to be able to ignore. Little by little, then, The City & The City reveals itself to be a masterful exploration of how the slippages of human perception can lead to real, deadly consequences.

Tags:China Mieville, The City & The City