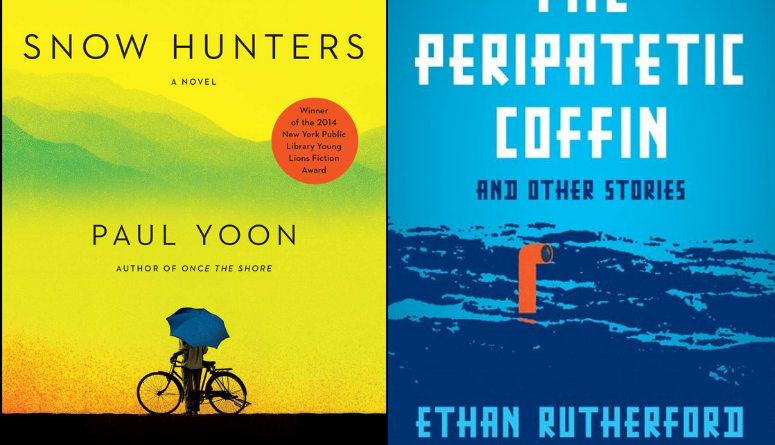 I recently moved, and while unpacking my books I stumbled upon an old issue of Ploughshares—Fall 2007, guest edited by Andrea Barrett. I don’t always keep my old literary journals, but I’ve kept this one because it included a story by a good friend of mine: “And We Will Be Here” by Paul Yoon. I remember that this, when it happened, was a Big Deal. It’s still a big deal. But to the two of us—we were young then, and so used to rejection that when a story wasn’t rejected you thought someone was pulling a prank—this was it. Paul had made it. I was jealous, I was proud. I remember when he called to tell me Andrea Barrett was taking the story. I hung up and thought: I can’t believe I know someone who is going to be in Ploughshares.

Well. Since then he’s published a story collection (Once The Shore) that made all sorts of Best- of-the-Year lists, earned him the John C. Zacharias First Book Award from Ploughshares, and he has been recognized with a “5 Under 35” distinction from National Book Foundation. His debut novel, Snow Hunters, has just been published and is garnering the kind of praise you might make up for yourself if you thought no one would find out. I gave up being jealous long ago. 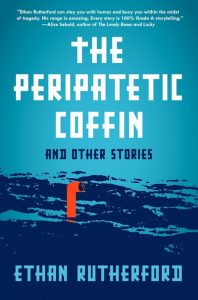 On Thursday, September 26, both Paul and I will read from our recently released books (Snow Hunters and The Peripatetic Coffin and Other Stories, respectively) at Newtonville Books. In preparation, I sent Paul some questions over email about his new novel, stillness in fiction, and the ways in which his writing is inspired by other forms of art.

RUTHERFORD: Rumor has it the original manuscript for Snow Hunters was over 500 pages. The book is now just shy of 200 pages. Can you talk a little about cutting the manuscript down? How did you decide what to keep and what to cut? It’s an astonishing feat of compression, a small book that actually feels enormous.

YOON: Thanks, I’m glad it feels and reads that way: I wanted to write the biggest story I could in the smallest way possible. But that meant, for me, writing a very long story first. So yeah, the first few drafts were ridiculous; it had many more characters, much more detail, a few more points of view. But it was always Yohan that shone, and so drafting was about whittling down the unwieldy block of prose to find him.

R: In Burning Down the House, the novelist Charles Baxter writes of stillness as being “an intensifier.” I’ve always thought one of the most intriguing and admirable aspects of your work is how still can be, and how patient you are as a writer—how unafraid of silence. You have the ability to hint at the great, deeply felt emotional lives of your characters with minute gestures. Early on in the novel, the young and displaced Yohan becomes close friends with the older Kiyoshi because they both find “comfort in the absence of telling.” Baxter goes on to say—I’m paraphrasing—that silence and stillness in fiction is a condition of loss, or grief.** I’m curious if you find that applicable to Snow Hunters?

Y: Isn’t Charlie wonderful? One of the greats. I think this is absolutely applicable to my novel, where the core of so many of the characters is defined by a profound loss of some kind. I’m also drawn to “silence” and “stillness” in fiction because for me it is in some ways an embodiment of wonderment, observation, and possibility. That charged, still moment before a leap. That hesitation before a gesture. The unspoken words that pass between two people before they betray each other. Portray an action after such a moment and it is “intensified.” At least for me it is.

[** “Trances, spirits, stillness. It is tempting to say that these elements begin to come together in a condition of loss, that what we have been talking about all along is loss, that stillness and silence are collaborators in waiting, but waiting without knowing what we are waiting for, waiting without an object in view. This is one of the ways in which I understand the process of grieving. The ground underneath us becomes immaterial, and we wait in full knowledge that what we wait for will not appear. There can be a curious calm and alertness, an animal sensitivity, to this condition.” Burning Down The House, by Charles Baxter]

Y: Painting, absolutely. I think this has a little to do with your comment on “stillness” and “silence.” The magic of standing in front of a painting never ceases for me: what you’re looking at is inherently a still object on a wall within a very fixed boundary, and yet through color and composition, etc., there’s an incredible energy on the canvas, a—for lack of a better word—narrative. It’s the liveliest of art forms, for me, and yet the most still. That resonates with me. As does music, of course: I grew up playing instruments so the rhythm of a line is very important.

R: So do you listen to music when you write? Do you have a favorite painting?

Y: I always listen to music. A kind of soundtrack to what I’m working on. Whatever it is it’s almost always in 4/4 time, though I’m not sure why—I think 4/4 is steady, and it anchors me, allows me to get solid footing in the fictional world. As for paintings, that list can go on. There are a few artists I have always loved—Rothko, Giacometti, Richter: I can sink into their work all day long. I was in Madrid recently with my wife and I got a chance to see Goya’s Black Paintings. I hadn’t seen them in over a decade and I had forgotten how incredible they are, how incredibly sad, especially The Dog, which is probably my favorite among that collection.

R: You’ve talked about this novel in some ways being a connected progression (geographically, thematically) away from the stories collected in Once the Shore. Can you elaborate on that a bit, and is there any hint of where the through-line will lead next?

Y: The writing process is extremely slow for me. So even as I started to think about the novel, I continued to feel the contrails of the story collection. It was hard for me to move on. So rather than nose-dive into something completely different, I took a single step forward, with one foot still in the world of wartime Korea. That step forward was across the ocean. I had the familiarity of Korea still with me as a kind of assuring guide, which allowed me to explore new territory, both geographically and thematically. As for the next step, I have no idea. And I couldn’t be happier. I’m in no rush. Someplace different is all I know.

R: You lived in Boston for years, and have now returned. Do you have a favorite “literary memory” in that city? A favorite apartment where a book was written, or an epiphany about structure near the Charles River?

Y: Well, you’re in one of my favorite “literary” memories. Many lifetimes ago, someone who is now very dear to me, Ann Patchett, selected my first published story for Best American Short Stories and there was this event for it. And you flew all the way into Boston to attend it with me (and my future wife, Laura.)

My memory of this night has less to do with the event itself but all of us together in my cramped basement apartment in Beacon Hill, unsure if there was going to be food there, and so we stuffed our faces with the only thing in my refrigerator, which was sliced turkey. Do you remember that? I don’t know why that has stayed with me all these years. There was a slightly conspiratorial giddiness in that room, the three of us, and I like thinking of us there, unsure of where our writing would lead us but happy, at least for that night.

R: I’d forgotten the turkey, but that memory is back now. I do remember that night. And that amazing guy who read your story aloud. Any books to look forward to this fall? What should we be reading?

Y: Without question J.M. Coetzee’s The Childhood of Jesus. I read it a few months ago. Mind-blowing. Reading it is like living with an answer on the tip of your tongue and racing through this maze of strangeness and familiarity to find it.

R: Final question: how does it feel to be called a “quotidian-surreal craft master” by New York magazine? Can we get that printed on a hat or something?

Y: I’m totally flattered. And I don’t deserve it, I’m not cool enough for it. You are, though. What’s the coolest thing someone has called you?

R: I’ve never been called anything, but someone recently wrote that after reading my collection you want to give me a hug to cheer me up. She meant it in a good way, I think! And who doesn’t want more hugs? See you on the 26th, buddy. You better come with hugs.

Paul Yoon and Ethan Rutherford will read from their work on Thursday, Sept. 26 at Newtonville Books @ 7 pm.

Paul Yoon, recipient of the John C. Zacharias First Book Award, is the author of Once The Shore, a collection of stories, and Snow Hunters, a novel. His work has received an O. Henry Award, appeared in the Best American Short Stories, and earned him a 5 under 35 Award from the National Book Foundation. His story “And We Will Be Here” appeared in the Fall 2007 edition of Ploughshares.

Ethan Rutherford’s fiction has appeared in American Short Fiction, One Story, and The Best American Short Stories. His first collection, The Peripatetic Coffin and Other Stories, was a B&N Discover Great New Writers pick, and was named (along with Snow Hunters) by Publishers Weekly as a Best Book of Summer 2013. His story “John, for Christmas” appeared in the Fall 2010 edition of Ploughshares.