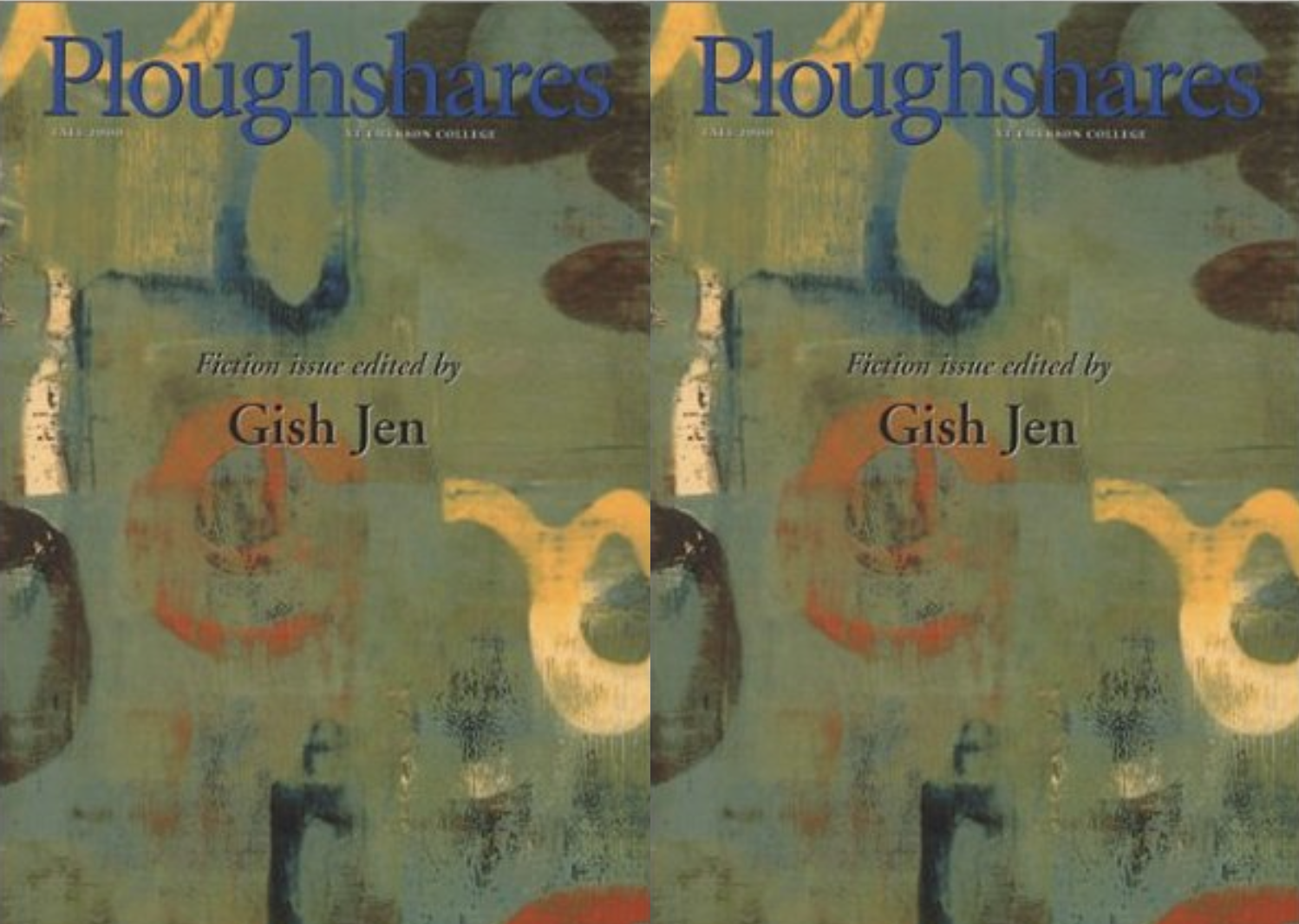 Thanks to everyone who has been entering our weekly Free Ploughshares contest! Today we are featuring a reader review of our Fall 2000 issue guest edited by Gish Jen, whose writing helped reader Christina A. Hitchcock introduce a new voice and perspective to her students.

When I started to teach a dozen years ago at UNH, I was subjected to some in-depth discussion (and instruction) on diversity. Living in and teaching in New Hampshire, many faculty and students still did the double-take when walking by a student in African dress or wearing a head scarf. As a teacher it was hard to teach diversity when every face in front of you was white and most students had grown up in a strong Judeo-Christian New England tradition. That’s when I found Gish Jen. I scoured the academic anthology I was using in my composition classes for works that would “introduce” my students to people who are “different.” I tucked her into my syllabus with Junot Diaz, Maxine Hong Kingston, Cynthia Ozick, Louise Erdrich, and anyone else who could represent the “other” to the “self” that my students saw themselves as being.

But despite the fact the Jen often writes about the immigrant experience, I came to see that her work is clearly about the differences that are perceived more than the ones that actually exist. In the Fall 2000 issue of Ploughshares, Gish Jen, as guest editor, presents us with stories whose characters are diverse by circumstance, but united by what they have lost. While the issue of self and other may be culturally defined, we most often define ourselves not by who we are or what we have, but by who we aren’t and what we lack.

In Elizabeth Graver’s “The Mourning Door,” a young woman’s inability to conceive drives her to insanity. What does a person do when the level of desire is so intense and the extreme measures a person takes to fulfill that desire are not enough? The woman is left nameless. While she feels alone in her inability to create a child, in truth, she is one of many who perceive they too are alone in their situations. Through her growing insanity, however, this woman learns to accept herself, as other invariably will.

In Pamela Painter’s “Grief,” a young widower trades away his common-sense in an effort to find relief for his loneliness and feel alive again. In “Hurricane Carleyville” by Ann Beattie, a former military medic has lost his ability to care for himself and interact with those who care about him. Instead his world revolves around a motley group of animals to which he is lovingly devoted. Those who serve us most nobly are often the ones we most often fail to serve.

There are stories in this issue that do find foothold in diverse cultures, a decade past it original publication, we find these stories less and less unique and the people within them more and more like ourselves. In Jen’s forward to this issue, she claims that “all of the pieces….discover themselves.” These stories do not preach, do not teach, do not point fingers or cast aspersions. They merely reveal a truth. Where the self and other exist, we are both.

Christina Hitchcock is an Adjunct Professor of English at Southern New Hampshire University and Manchester Community College where she teaches courses in composition, literature, and creative writing, and film studies. She is a blogger who lives in Derry, New Hampshire with her husband and three cats.

Rhian Sasseen is a rising senior and English Language & Literature major at Smith College in Northampton, MA. She is a summer editorial intern at Ploughshares.