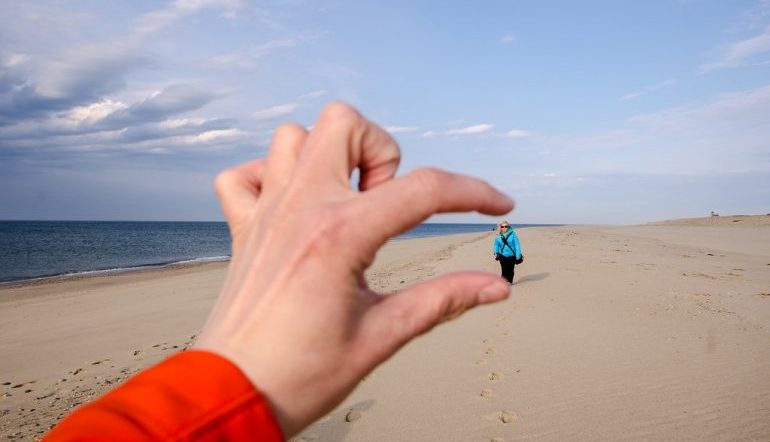 A forced perspective photo is the ultimate souvenir: a picture capturing a kiss on the mouth of the Great Sphinx of Giza, a finger lightly placed on the tip of the Taj Mahal, or palms holding up the Leaning Tower of Pisa, knees bent with the pretended effort. These photographs distort the view so that the subject appears larger, on the same scale as the featured monument. To create the illusion, these photographs require a willing subject as well as a photographer able to map the shot and make sure both the tourist and the structure are lined up correctly. In Lara Williams’ short story “A Selfie as Big as the Ritz,” the titular selfie is a man’s back-up choice when his girlfriend isn’t interested in being the subject of his forced perspective photo with the Eiffel Tower. By comparing Samuel’s selfie to a hotel that stands tall and decadent in the cultural imagination, Williams draws connections between the subtle themes of mapping, ownership, and value present in both her story and F. Scott Fitzgerald’s of a similar name—“The Diamond as Big as the Ritz.”

Mapping is a recurring theme in “A Selfie as Big as the Ritz.” During the first scene, Samuel is with his girlfriend, who remains unnamed, at a faculty party. He looks around, noting the arrangement of people:

The huddled modernists, the distended narratologists, the Americanists being loud and brash (of course). Standing together in groups of twos, threes and fives; a couple of loners circling the room. A chaotic Fibonacci sequence! he thought, with her at the center of all things in a way he had never really noticed, dressed like a precious metal.

Samuel defines the faculty by their research interests in this process of identifying their arrangement, taking place as he “survey[s] the room.” The more common definition of survey is to look carefully or to observe, but it’s also a technical term. To survey is to identify and define the surroundings of an area to create a map. A survey map, specifically, is a map that records boundary lines. If this woman “dressed like a precious metal” in a silver dress is at the center, then the surrounding academic clusters and loners suggest a boundary—one that Samuel, as the observer, appears to be outside of.

After realizing his girlfriend’s central place in this social, academic arrangement, Samuel spends more time considering the spatial details of his girlfriend’s body—and worrying about why he doesn’t know them. He is shocked by the way her body has become “defiant in its rigidity,” no longer “smooth and yielding” to his touch. With this change, Samuel “suddenly saw its capacity for secrets.” The examples of the potential secrets this woman could carry are various methods of hiding money in her body, but it’s clear that Samuel is anxious about losing his girlfriend or, worse, realizing they never had anything with each other: “Now that the cartography of her body no longer made sense, like a map written in verse, nothing else seemed to make sense also. He doubted whether he had ever known her at all.” The map terms here are clear: her body is cartography that he isn’t able to pin down, suddenly as unnavigable to Samuel as “a map written in verse.” We might describe this trailing off in a relationship in similarly spatial terms: the two had grown apart.

While it’s clear throughout the story that Samuel isn’t able to successfully record and delineate his girlfriend’s body, her refusal to allow him to do so is made explicit during their trip to Paris, which itself is undertaken in an effort to revitalize their relationship. In preparation, Samuel plans out the vacation meticulously. He focuses on location and moving his girlfriend throughout the city: “A river boat up the Seine, a walk around the Sorbonne; they would hold hands and visit graves.” Missing in his plans is recognition of his girlfriend’s desires or explanation of their mutual interests. Instead, it’s a weekend of commonplace “romance and roses,” complete with a stop at the Eiffel Tower:

Approaching the Eiffel Tower he implored her to hold her hand skyward, a perspective photo; looking as if it were in her palm. She refused, shaking her head, letting all her hair fall into her eyes like the limp tassels on one of the imitation designer handbags she wouldn’t let him buy. At the top of the tower, she would still not have her photograph taken, and hadn’t offered to take his. He angled the phone in front of his face, the screen beaming back his reflection. He thought he looked very handsome today. Well, it would be a fantastic selfie. A magnificent selfie. A selfie as big as the Ritz.

As Samuel asks his girlfriend to pose for a forced perspective photo, the “forced” is noticeably dropped. When she refuses to pose for this picture or any other, the reader is left to wonder why. Why had she agreed to go to Paris? Does she not like having her picture taken? Has she already planned to break it off with Samuel? He doesn’t seem to wonder about any of these things. Instead, he settles for his own distorted picture, a selfie so “magnificent” that it scales up to monumental proportions without the forced perspective: “a selfie as big as the Ritz.”

Here, Williams alludes to F. Scott Fitzgerald’s “The Diamond as Big as the Ritz.” In this story, John T. Unger meets Percy Washington when they are both attending a prestigious boarding school near Boston. Percy invites John to his home in the Montana Rockies for the summer, where his father “has a diamond bigger than the Ritz-Carlton Hotel.” As John learns, the Washington home is built on a flawless, mile-long diamond that was discovered by Percy’s grandfather, Fitz–Norman Culpepper Washington. After determining the size of the diamond, he realized quickly that he couldn’t sell a diamond of that size without contributing to an economic crisis; it was so valuable that he worried an appropriate comparison or enough gold to make a sale wouldn’t even exist. This discovery, then, landed the older Washington in a complicated situation: “It was an amazing predicament. He was, in one sense, the richest man that ever lived—and yet was he worth anything at all?”

The Washingtons had since been going to extreme and deplorable measures to keep this diamond, and the area where they live, uncharted. When they arrive, Percy tells John that he is “now on the only five square miles of land in the country that’s never been surveyed.” Instead, John visits a dungeon where the family held failed surveyors, explorers, and former visitors to prevent word of their location and their diamond spreading. The Washingtons go to this length (ultimately meeting a grisly death) because of their desire to own this monumental diamond despite living in constant anxiety about the extent of their supreme, but ultimately unknowable, wealth.

The allusion to this story in the description of Samuel’s selfie indicates Williams’ subtle revision in a central theme: like the Washingtons, Samuel’s primary anxiety centers on mapping. The Washingtons worry about their monumental diamond appearing on a map and becoming discoverable, putting both their ownership and their wealth in jeopardy. Samuel attempts to map out his girlfriend’s body so that he can define and account for it. But this connection between these stories gives weight to Williams’ monetary references, too: Samuel compares his girlfriend’s silver dress to a second-rate precious metal, marvels at the possibility that his girlfriend could be hiding money in her body, and marks their trip to Paris with the purchases that she isn’t grateful for. In short, Samuel’s anxious attention to the details of his girlfriend’s body are connected to her value; while not explicitly monetary, attachment to an attractive woman is a social currency, and he becomes anxious when her value becomes unmappable, uncontainable.

At the end of Fitzgerald’s short story, airplanes attack the Washington’s house, destroying the structure, the diamond, and the family members who stayed behind. John rescues two sisters, Jasmine and Kismine, the latter of whom plans to marry him. Kismine has brought a handful of jewels from the house so they can start their life together, but after the explosion, as the three teenagers hide in the woods, Kismine realizes that she brought her collection of rhinestones, all stolen from a visiting child’s dress, instead of diamonds. Samuel’s selfie, much like these gemstones, is a comparatively useless souvenir from a romantic vacation, even if it’s as big as The Ritz.