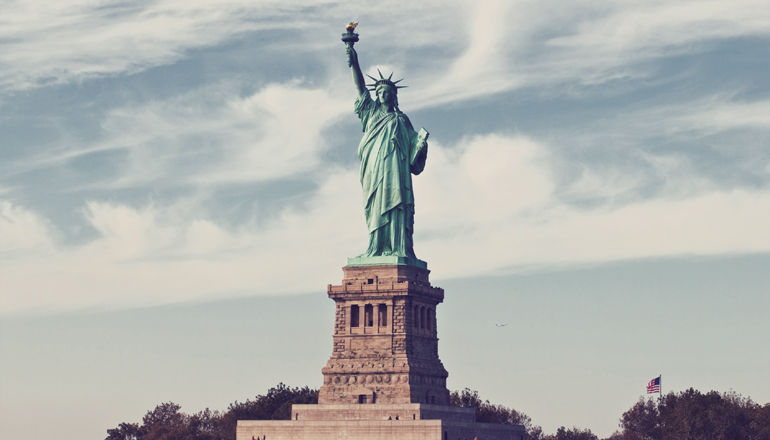 The idea that there is something unique, something exceptional about America, dates back to de Tocqueville and has firmly taken root in the nation’s literary and political imagination.

According to an author pitched as a modern take on de Tocqueville, though, that very idea is driving Americans apart. Mugambi Jouet, the author of Exceptional America: What Divides Americans from the World and from Each Other, told public radio in Tulsa that “the American Dream can be a source of inspiration . . . but also it can be a very divisive national ideal.”

Jouet argues that politicians have miscast the idea that America is exceptional, that over the years, they have wrung from the simple observation that the United States is a bit of an outlier from European democracies, an all-consuming belief that America is morally superior to other nations.

Ronald Reagan, in particular, famously leaned on an image from the “Sermon on the Mount” to describe American exceptionalism as a “shining city on a hill.” In his farewell address, he said:

I’ve spoken of the shining city all my political life, but I don’t know if I ever quite communicated what I saw when I said it. But in my mind it was a tall, proud city built on rocks stronger than oceans, wind-swept, God-blessed, and teeming with people of all kinds living in harmony and peace; a city with free ports that hummed with commerce and creativity.

While the political rhetoric of American exceptionalism is associated with the political right, speechwriters on the left are just as likely to declare the United States the greatest nation in the world, and the elected officials for whom they work are nearly unanimous in securing a flag pin to their lapel.

Attacking one’s political opponents for insufficient bluster on the topic is, too, bipartisan. During the 2009 election, Republicans seized on a comment by then-candidate Barack Obama, in which he stated plainly, “I believe in American exceptionalism” to claim he didn’t. In 2016, Hillary Clinton sought to attack Donald Trump for his supposed resistance to the term (and, one presumes, the concept).

Yet Trump, and those who write for him, seemed to play off the theme, even while imbuing it with an isolationist New Coke flavor. In his inaugural address, Trump said of America, “We do not seek to impose our way of life on anyone, but rather to let it shine as an example. We will shine for everyone to follow.” Left unsaid is what would happen to those who do not follow.

The story matters, because it provides the most powerful Americans with a handy, if self-righteous, narrative ascribing rightness, fairness, and even the divine provenance to their good fortune.

Robert H. Frank, author of Success and Luck: Good Fortune and the Myth of Meritocracy, points to studies that say “wealthy people overwhelmingly attribute their own success to hard work rather than to factors like luck or being in the right place at the right time.” Frank is troubled by this fact, because those who see themselves as self-made, rather than acknowledging the public investment, personal connections, or dumb luck that contributed to their rise, are “less likely to support the conditions (such as high-quality public infrastructure and education) that made their own success possible.”

A fictional take on the distance between those who seek the promise of the exceptional America and those who enjoy it is at the heart of Imbolo Mbue’s Behold the Dreamers, a novel populated by strivers at opposite ends of the socioeconomic spectrum. Washington Post book critic Ron Charles calls Mbue’s characters “drunk on the sweet old tropes of national exceptionalism,” and the villain in the story, the “vast bureaucracy designed to wall off the American Dream from outsiders.”

For nonfiction author Ta-Nehisi Coates, that wall is designed, brick by brick, to protect those with the means to build it, those Americans, as he writes in Between the World and Me, for whom “their possession of the Dream is natural result of grit, honor, and good words.” To live in the lavish garden of American exceptionalism requires a willful disregard, Coates argues, for generations of systemic efforts to cleave the American Dream from some and wrest it into the hands of others. He writes for those who hold power, wealth, or status in modern America:

To acknowledge these horrors means turning away from the brightly rendered version of your country as it has always declared itself and turning toward something murkier and unknown.

This makes clear the stakes of political rhetoric continuing to lean on the shining myth of American exceptionalism. When the story is told that America is superior, that its values set it apart, it divides those who believe themselves to have benefitted from these ethos from those they perceive have not. The all too common call for unity, for us to come together as a nation and put aside our differences, may, in fact, find its fiercest obstacle in the stories that we tell ourselves.

Tags:Exceptional America: What Divides Americans from the World and from Each Other, Mugambi Jouet