Home
»
Interviews
»
“A Sort of Sci-Fi Apocalypse of Flowers”: An Interview with Karim Kattan 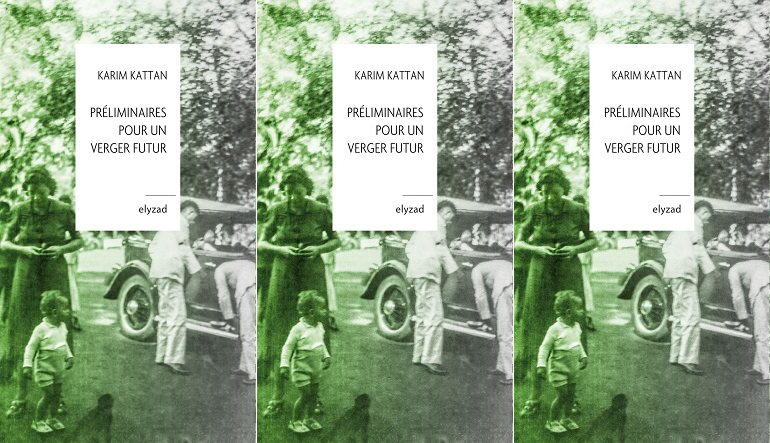 Karim Kattan is a young writer who lives between Bethlehem and Paris. He has written for The Paris Review, Vice’s i-D, and The Funambulist, among others. In 2014, he founded el-Atlal, a yearly residency in Jericho for artists and writers. Préliminaires pour un verger futur, published by Elyzad, is his first book. We spoke about language and what he’s working on now.

AK Afferez: Préliminaires pour un verger futur, or Preliminaries for a future orchard–the title alone is already so gorgeous, and so wistful at the same time. We get the sense that we’re poised at the beginning of something, of some potentiality, which we may or may not see bloom. Can you tell us a bit about the genesis of this book?

Karim Kattan: Palestine is stuck in a perpetual state of commencement. It’s terrible, it’s even worse than being in arrested development. It’s like someone keeps telling us, “It’s about to happen!” and it never does. So everyone feels this mix of cynicism on the one hand and steadfast belief that whatever it is we want is right within our grasp. Tantalus’ punishment, basically, reinvented for the ultramodern era. So I wanted the book itself to feel like a threshold.

My original idea was to have four stories in this book, which corresponded to four different timelines: legend, past, present, and future. However, as the project evolved, both the legend and the future came together in the title story, which recounts a love affair in London, during the Second Intifada, between two Palestinians, a nameless man and Asma, who tells him the story of the past and future of Palestine. Asma’s story recounts–in her very precious manner–the Nakba and ends with a vision, a sort of sci-fi apocalypse of flowers. The orchard by the sea is the focus of a lot of Palestinian longing for a lost land. It’s also, for me, the place where stories are told or whispered. So, when return seems further and further away, the garden is like a time capsule, where one can make new things–stories, dreams–grow. It’s not about being stuck in the past, but rather about tentative futures.

I don’t want these stories to have anything definitive about them. They’re trials, insofar as each character is trying something out: there’s an attempt to travel, an attempt to love, to speak, to tell stories. Ultimately, they all fail, but I hope they each in their own way created a quiver; if Palestine is anything at all, it’s a quiver.

AA: You’ve written and published in English before, notably in The Paris Review, but here you’ve decided to write in French. Language in general plays a big role in the three stories, in terms of how it reflects and refracts both politics (as well as history, erasure, oppression, power) and desire. Was it a choice, writing in French? How do you negotiate navigating between languages and forging a relationship to each?

KK: What all those characters have in common is not the fact that they are Palestinian–they are all on the verge of un-Palestinianity–but the fact that they fail. And the biggest failure of all is not being able to tell stories: in fact, their narratives are stuck in their throats. I guess this sums up my relationship to language. Like many people in the world, no language is really mine. I’ve grown much closer to French in the past few years, which has become my step-mother tongue, but English remains a language I feel more comfortable in as a writer because it manages to make room for one better than others. Arabic is the language I’ll never master and always feel inadequate in, yet is the first language I spoke and still is the language of intimacy and home and hope.

The first short story was first written with this idea that, for me, English or French are the languages of desire, but Arabic is the language of death, and love.

In the case of this book, language was not really a choice: I was contacted by the publisher, Elyzad, a Francophone publisher based in Tunis, who was willing to take a risk by publishing a previously unpublished author. As I wrote, I kept asking myself who the audience of the book is. Because it’s in French, the audience isn’t Palestinian. Had I written it in English, it would have been more readily accessible to a wider audience in Palestine and the Arab world. It’s a funny feeling, to not know who you are talking to.

Furthermore, it’s complicated publishing short stories in French, because as a genre it’s not considered respectable or readable today in France. This, in itself, is an interesting liminality: publishing a collection of short stories–an overlooked genre in the country–with an independent publisher that is located outside of Paris, the center of Francophone publishing practices. Working with the publishers at Elyzad has been wonderful. I do not think I would have found this presence, or this attention to my manuscript, elsewhere. What French publisher would have taken the risk of publishing a collection of short stories from an unknown person? But now, I feel the pressing need to revert to English. It’s just like when you’ve been on vacation and want to leave again as soon as you come back home.

AA: All the characters are Palestinian but each has his or her own way of being Palestinian and relating to this identity. It seemed to me, though, that there were strong echoes from one character to the other, notably in how Palestinian identities are in-between, transient. Whether the stories are set in Palestine or among the diaspora, we get the sense of a profound liminality. Is this something you’ve experienced yourself?

KK: I only noticed afterwards that all the men of the book are nameless. They are shadows, and disposable, even when they are narrators or protagonists. On the other hand, the women are often named, even when they are secondary characters. Maybe that’s what being a Palestinian man feels like? I guess this invisibility is my experience, yes, especially as someone who doesn’t know particularly well how to perform masculinity. The men in the stories basically fail at being what is expected of men; they’re often compared to objects of the natural world, and many of them are fairly ridiculous.

In any case, it’s funny because people tend to read these short stories as autobiographical to some extent. None of them are.

I think liminality is a much more apt term than others that have been thrown around, like “exile,” which I dislike intensely. It’s a word often used, especially in French, to broadly define any foreign Francophone author. It strikes me as being incredibly obsolete. Most characters of this book are privileged, and clearly have high income of some form or another, and travel the world with a certain ease. I’d hardly define this as exile. Nomadism, maybe. But they are liminal, of course, and they’re stuck in non-spaces. They do not notice where they are. Their sense of place has been blunted.

None of the stories are set in Palestine. Even the first one, “Iode,” does not take place in Gaza proper but in a hotel room in the city, which the lovers never leave; the story begins when they set foot in the hotel, and ends when they leave it. And whenever the narrator looks outside of the room, he sees other places: Miami, Tel Aviv, Geneva. He sees the past, or the future, or anything else, but he rarely sees Gaza as it is at the time when he is looking at it. His gaze is hindered. And in the second story, “Bombay,” the narrator attempts to excavate the intimacy of a dead Palestinian woman through her pictures and letters. What happens eventually is that the dead woman takes over the story because he has failed to deliver what she would have wanted: an account of her that is both alive and true. His story is overcome with static.

I guess what I wanted most to do with this book is create these hindrances of speech and gaze; it’s only a preliminary because there is so much noise. I like to think that Émilie, the heroine of “Bombay,” is really the guide in this book. She is the only one who pays attention to things, and details, and places. She’s the only dead character, yet the most lively one, who takes her own story in charge, from beyond the grave.

AA: In 2014, you founded el-Atlal, which organizes residencies for writers and artists in Jericho. What other projects do you have now?

KK: I am currently answering your questions from Jericho, where we are conducting the 2017 edition of the el-Atlal residency. There’s exciting stuff happening. Our residents are looking at traditional artisanal techniques from Jericho, including mud-building and mosaics, and at the relations between ecology and geopolitics in the Jordan Valley.

I’ve been working on a novel which I’d love to finish sometime soon–next year perhaps? It’s a novel set in a distant post-apocalyptic future. It’s full of pretty traditional sci-fi tropes, but repurposed in a sense. Like for everything else I write, I am loathe to say it is “about” Palestine. It’s about time and the ways we tell, preserve, and lose stories. If I were rash, I’d even say it’s about love!