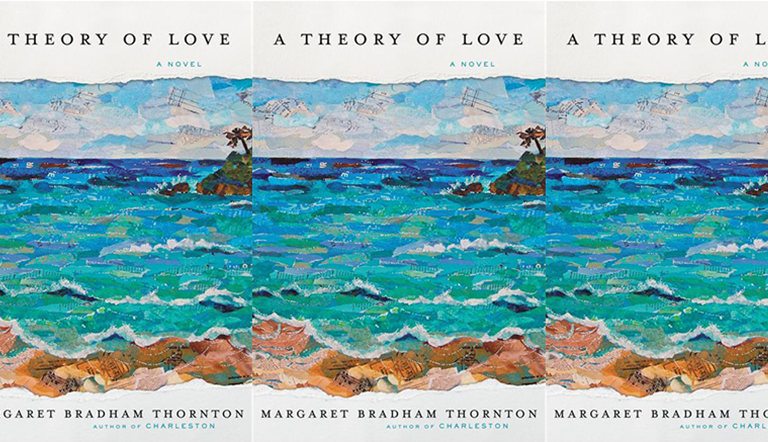 A Theory of Love
Margaret Bradham Thornton
HarperCollins | May 8, 2018

Exotic locations may add intrigue and a sense of adventure to a novel, but rarely do they also affect the character relationships so fundamentally as in A Theory of Love by Margaret Bradham Thornton. When British journalist Helen Gibbs meets half-French, half-American financier Christopher Delavaux while on assignment on the west coast of Mexico, she doesn’t expect their first encounter to lead towards marriage in London just a few months later. Yet even though Helen and Christopher live the jet-setting lifestyle of Europe’s wealthiest, his high-stakes firm may just push them apart when Christopher believes his business partner Marc is involved in illegal activity.

From the first moments of the novel, “[t]he idea of color as a type of compass—a form of geography—had enthralled Christopher”, who is on vacation and at a standstill between two careers. After giving up his life as a lawyer in America, Christopher visits the home he inherited in Bermeja, Mexico to rest before he starts his London finance firm. The novel, which shifts third-person perspective between the two lovers, reveals the impossibility of ever fully knowing someone when thoughts are inscrutable even to the people thinking them. As Thornton writes, “[m]emories were always rearranging themselves like flocks of birds that shifted formation and changed altitude according to some unknown algorithm.” Although Christopher and Helen may share a deep love for one another, it is their memories and the secrets they keep from one another that test them.

This is illustrated when Christopher asks Helen about the last article she wrote for the Morning Standard about untranslatable words. She admits that her favorite word is neverness, defined as “eternity, for ever and ever, always.” The two debate whether this word exists in other languages, coming to the conclusion that “the opposite of infinity” is a dreary concept that they make sure not to mention again. Still, it dwells just under the surface of their relationship.

In A Theory of Love, Thornton pursues space as a construct between lovers. The book is organized into chapters named by their locations, linking the chapters that take place in the same locales. In these chapters, Thornton uses the metaphor of entanglement theory to ask whether two people can break an attachment when so much remains in the physical spaces that used to contain their love. Throughout the novel, Thornton entwines the concepts of geography and color, appropriate for a novel that takes place in scenic locations including Saint-Tropez, Tangier, and Santa Clara.

While the novel takes place in locations across Europe and North America, Bermeja is the place that most affects Christopher and Helen’s relationship. Like a concept the novel can’t stop returning to, the lovers always find themselves here when their relationship is being tested or at a breaking point: “The boundaries between them disappeared when they lay next to each other, but they always reappeared the next day, permission to cross was never granted.”

In addition to the regular travels that allow them to stay at the homes of wealthy friends in the French Riviera, Helen is inundated by social calls with Christopher’s acquaintances. While she has always had a tentative connection with the wealthy through her career as a journalist, Helen isn’t used to the constant socializing required of Christopher, who must build his firm from the ground up. While initially major corporations don’t want to take a risk on his two-man business, Christopher’s firm grows so rapidly that by the end of their first year he hires an entire office of people to assist him. Before long, Christopher’s shady business partner Marc runs a branch of the business in Italy.

When Christopher becomes preoccupied with the possibility of federal charges being levied against him, Helen realizes that their connection is waning. After running into a photographer friend she used to work with, Helen realizes that she wants to take more risks with her reporting. When she discovers a rare memoir from an orphaned circus performer in Cuba, Helen visits Havana to find the missing link. It is journeys like these that reveal her hidden depth, freeing her from Christopher’s artificial acquaintances, which frustrate just as they intrigue her.

What is most beautiful about A Theory of Love is Thornton’s ability to make us feel deeply through setting, “how emotions experienced in a place remained, so when you came back you could find them again.” Although Christopher and Helen travel all over the world, their continual re-envisioning of their relationship in Bermeja feels true. No matter how fractured their romance becomes, we feel the pain of their losses through elements as subtle as the sun’s light shifting over the land at sunset.