Home
»
Interviews
»
“A Way I Could World-Build in Poetry”: An Interview with Margaret Rhee 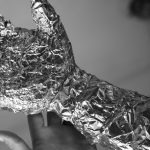 Margaret Rhee’s poems surprise and delight. She uses the what-if of machines falling in love as a springboard to launch us into a strange, beautiful, unforgettable new world that is all her own. A feminist poet, new media artist and scholar, Rhee is the author of the chapbooks Radio Heart; or, How Robots Fall Out of Love and Yellow, and the co-editor of Here is A Pen: An Anthology of West Coast Kundiman Poets and Glitter Tongue: Queer and Trans Love Poems. She currently serves as a visiting assistant professor in Women and Gender Studies at the University of Oregon and an associate editor for Tupelo Press. Earlier this year, we had the chance to talk via email about poems, robotic realities, and whether someday machines might really fall in—and out—of love.

Matthew Thorburn: You teach, write and conduct research on the cultural politics of robots—and I understand that your chapbook, Radio Heart, is also part of a book-length collection you’re working on called Love, Robot. Would you tell us about how you became interested in robots, and what draws you to writing about them?

Margaret Rhee: Earlier this summer, I gave my second poetry reading solely from my chapbook for a high school class in Los Angeles. It was a vibrant classroom filled with mostly Latino and Asian American students—indicative of the rich diversity of Southern California. The first reading solely for the chapbook was in California too, earlier this year and at UCSD where a few art and technology courses were reading the chapbook. Both groups of students were great to work with because they came in with an interest in and cultural knowledge of robots. As much as they are the “digital native” generation, they are the robot generation too. Many of the students have hands busy with their cell phones; we are all cyborgian. For extra credit, the students at UCSD wrote poems inspired by the chapbook. It was quite spectacular to hear some awesome student poetry about their iPhones! I think as a society in the digital age, we all are quite familiar with robotic tropes and realities, but I suppose the work of cultural analysis is to name and trace the inundation with ethical considerations as well.

In the same way, I began to be interested in robots because of societal phenomenon, and what robots teach us about what it means to be human. I think the robot presents so many questions for us to grapple with, in our urgency for humanity—compassion, empathy, justice. Could we think of robots as entities that evoke more compassionate characteristics than humans? Could we think of robots as object-choices of desire, or more compassionate lovers?

As a scholar on robots, I worked with several roboticist-artists, namely Ken Goldberg who served on my dissertation committee, and this opened up my own artistic exploration of the robot. My scholarly work centers on culture and difference (namely race) and the robot. It is quite analytical and historical work. In poetry, I could ask related but different questions. The robot then was a way I could world-build in poetry and explore difference by way of what my mentor, poet and artist Truong Tran, writes of the back door. I also realized at the time that robots made me riskier and braver in my poetry.

MT: Radio Heart begins with a variation on a famous question: Can machines love? In your chapbook, you’ve imagined and vividly brought to life a world in which they do (or at least, like humans, they try to) and in which humans try to love them back. Do you foresee a world in which this imagining comes true?

MR: The question does draw upon Alan Turing’s question, “Can machines think?” As a poet, I switched the “think” to “love” within the introduction of the chapbook. I hoped it would frame the collection and urge thinking about love in explorations of artificial intelligence (AI). I do believe that Alan Turing was able to conceptualize AI through his own sexual transgressions and freedom, in the blurring of the rigid binary between male and female in his same-sex desires. I have written about this aspect of Turing’s sexuality and about my work developing the Turing Test Tournament as a new media artist in a short article entitled “On Beauty.”

In regards to your thoughtful question about foreseeing an actual future of love and robots, I do see this happening. In some ways, while “robots” are not actively present in our lives, we can look at the everyday presence of digital devices and the intimacy that humans share with them. Something as small as the iPhone evokes much emotion within humans. Additionally, how humans find other humans in their pursuit of love is increasingly digital. We live in an ever-increasingly digital object-orientated world.

MT: How did Radio Heart come together as a collection of poems? What was that process like for you?

MR: In 2014, I was in a graduate poetry workshop with Robert Hass, and for the workshop we were encouraged to create a chapbook. Prior to entering I wrote my first robot love poem, which was “Love, Robot.” I thought the workshop structure would be a great way to explore this obsession/fascination, and I wrote the first and second sections of the chapbook, “Love, Robot,” and “Radio Heart.” At the time, I was also doing my dissertation research on robots, so the poetry was a creative reprieve and symbiotic exploration of what I was learning and questioning.

After the workshop, I worked on additional sections, which are included in the larger manuscript Love, Robot. In many ways, the chapbook is about poetic form—for example, the second section is all four-line poems, and informed by love poems by Shakespeare and Neruda. Finishing Line Press did an amazing job publishing the collection, and I am grateful to them for their support.

MT: How does a poem start for you?

MR: Poems usually start visually, and with an observation. I try to attend to awe, and what is moving to me in the everyday. Several of the poems in Radio Heart began in various settings with seeing human/machine interactions. For example, being at a coffee shop and seeing a human operating a coffee machine would stir up a narrative about the machine and love. The poem, “Light, Robot,” began in Berkeley. I was sitting on a bench waiting for the bus one afternoon, and I began gazing at the window of a beige 1930s apartment building in front of me. It was an opaque window that caught my interest, and a tree. I began to imagine a robot waiting for her lover, there by that window, and thinking about light as the sun began to set.

MT: In addition to writing poems, you have also edited a number of publications, and serve as an associate editor for Tupelo Press. Does your work as an editor inform or influence your own writing as a poet (and vice versa)?

MR: Whenever I get invited to participate in a poetry reading with others, I always observe how the best part is not reading my own stuff (I am not the best performer!) but hearing others. In the same way, editing anthologies and literary journals has been a really generative way for me to read other people’s poetry and support the literary community. It is an opportunity to learn about poetry firsthand. When I was working as managing editor of Mixed Blood with Cecil Giscombe, he told me that in publishing we were doing the work of creating literature. So there is a difference between the poem on the page and the poem in the world as literature. It is very pleasurable to celebrate and support literary community and contemporary poetry in this way.

MR: I am finishing up this full-length book of robot love poems, and working on a new book entitled Manifesto: I Love Juana and other Poemas. The latter is a collection of political poetry. No science fiction at all, more like manifestos about race, gender and sexuality—pretty explicitly! It’s not that I’ve given up SF poetry, but I’ve written political poetry through the years and found that the times seem to signal a return to it. I still love machines, and I edit a zine entitled Machine Dreams that features writing about machines. With my friend, poet Neil Aitken, we are trying to re-launch the first issue this fall.

MR: Neil Aitken’s recent chapbook Leviathan is full of incredibly moving poemas about machines. Currently, I am editing a collection of Korean American women’s poetry for Tupelo Press. Through the process, I’ve been so moved engaging with poetry by Monica Youn, Marci Calabretta Cancio-Bello, and other Korean American poets. It has been a blessing and it really is a sacred act to work as a poetry editor.

I’m an avid reader of other genres, and this summer I’ve really enjoyed reading Interaction of Color by Josef Albers, Letter to a Future Lover: Marginalia, Errata, Secrets, Inscriptions, and Other Ephemera Found in Libraries by Ander Monson, and criticism on Paul Celan’s poetry of devastation by Paul J. Griffiths.