Home
»
Critical Essays
»
“A Wilderness of Being”: Maternity in the Apocalypse 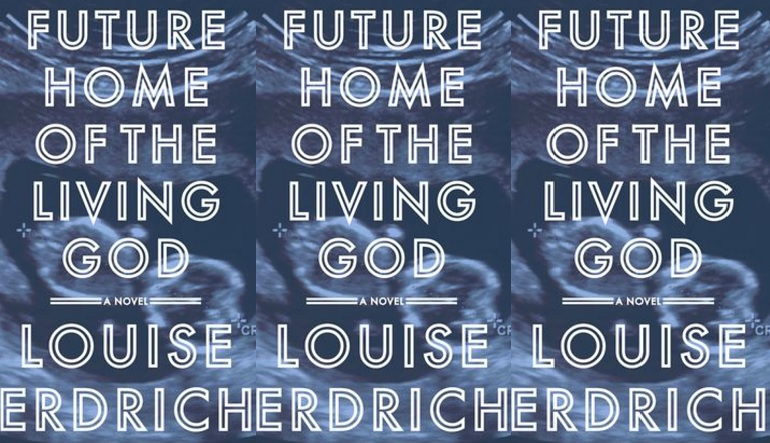 In Louise Erdrich’s latest novel Future Home of the Living God, the laws of physics have gone haywire and evolution has started moving backward. Animals have stopped “breeding true,” and pretty soon, so have humans apparently: pregnancies become complicated; fewer boys are born. No one really knows why, and since everybody wants answers, the U.S. government begins rounding up and monitoring pregnant women, as it slips into theocratic totalitarianism. Women who do not willingly go to the authorities are forcefully detained; a bounty is put on their heads. Cedar Hawk Songmaker, the protagonist, is writing letters to her unborn son; these letters make up the novel.

Cedar is especially interested in the theological and historical interpretations of Mary’s pregnancy and of the Incarnation, which constitute the themes of the scholarly journal she is putting together. She comes to embrace pregnancy, Mary’s and her own, as a “wilderness of being,” pointing to the reshuffling of her sense of self that comes with being pregnant, beyond any cliché about a broader cosmic connection offered by the creation of another human being. Through pregnancy, the being is bewildered, just like Cedar’s world is bewildered in the face of physical laws that were once thought eternal and that now baffle scientists.

Later, she is detained by the authorities and sent to a hospital where the drugs she is given provide the illusion of comfort and happiness. Seeing through this simulation, she manages to escape, killing a particularly devious nurse in the process. She makes her way to the reservation where her biological parents live; later she will be caught again, ratted on by a couple in need of money, and sent to a prison where she gives birth. It is implied an allied doctor has managed to smuggle out her infant son, but Cedar’s exact fate inside the walls of her new jail remains unknown.

Future Home of the Living God has been hailed as the heir to Atwood’s The Handmaid’s Tale, mostly because it talks about women forced to carry out pregnancies and dystopian political repression. Those two ideas together, however, are nothing new. There’s a recurring trend in post-apocalyptic or dystopian fiction of representing the violence and repercussions of heightened surveillance, oppression, and control of the population’s bodies in dystopian settings through the control of pregnancies and motherhood. As one of the most ambiguous characters in the novel, Phil, states, “After all it’s a global crisis, it’s the future of humanity, so you can see why they need to keep an eye on women.” This usually goes hand in hand with sacralizing the female body and defining womanhood by the ability to give birth—within a heterosexual frame, of course, which leaves little space for such groups as trans and intersex women or lesbians to redefine their womanhood and their relationship to motherhood on their own terms.

With the arrival of Trump in power, The Handmaid’s Tale has become a classic symbol of resistance against the right’s repeated assault on women’s rights and in particular against guaranteeing justice, safety, and freedom when it comes to reproductive healthcare. Yet, as Priya Nair has pointed out, the inherent anti-blackness of the novel restricts its revolutionary potential. There are no real references to black characters in general, or to black women specifically; yet what Atwood is describing—a regime of sexual slavery and forced maternity—has already been enforced on women of color as part of structural violence and domination. Priya Nair sums up the issue: “Writing a story about white supremacy with no Black characters, while using the erasure and exploitation of Black pain, is art that further silences and marginalizes Black women at its core. […] To ‘uncover’ the dystopia of American history without centering on Black people is yet another story in the service of white supremacy.”

What’s so radical then about Future Home of the Living God, among other traits, lies in the way it positions pregnancy, maternity, and birth control policies within a racialized and indigenous framework. It displaces and interrogates this new world order in a way that Atwood doesn’t. By having an indigenous protagonist, the novel is haunted by the issue of how whiteness has conditioned access to reproductive rights and body autonomy. Cedar grapples with her own Ojibwe identity, as a Native American adopted by a liberal white couple. Her allegiances are complex and she strives to make sense of the very idea of lineage, both for herself, for her son, and for a world where evolution is no longer functioning the way it’s supposed to.

By centering on Cedar as actively resisting the theocratic system, Erdrich inscribes her within a history of white supremacy surveilling, regulating, and repressing brown and black bodies: the issue of how whiteness has conditioned access to reproductive rights and body autonomy haunts the novel throughout. This is especially visible when Cedar heads back to the reservation and stays there in hiding with her Ojibwe family. Her mother’s partner is leading the way to reassert indigenous sovereignty over the space of the reservation; he is adamant about also making this space one of sanctuary for Cedar. The reservation thus becomes a space where resistance against the colonial and repressive state can be deployed on many levels. In this context, by displacing the experience of maternity in a post-apocalyptic, indigenous setting, Future Home of the Living God locates maternity as a tool to wield different kinds of power and to shape different political visions in a world that is on the cusp of radical transformation.