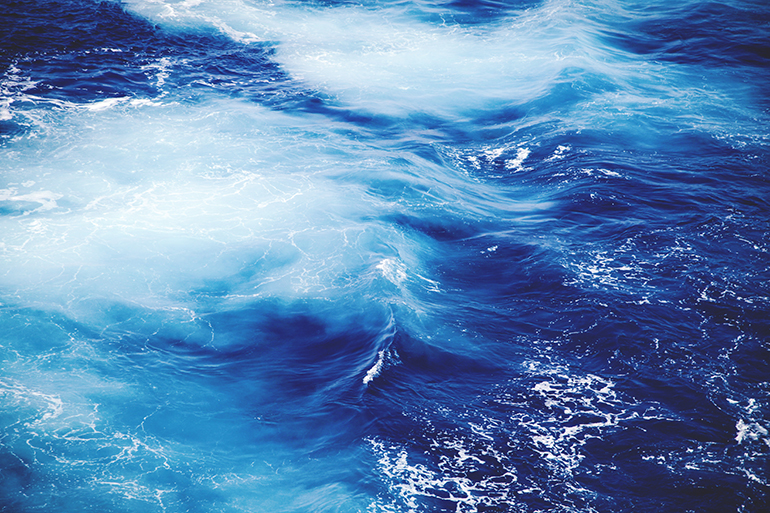 Across languages, cultures, and time, blue is humanity’s most novel color.  As far back as we can track human words for colors and their appearance in art and artifact, black and white were first, then red, yellow, and green. In Homer’s Iliad and Odyssey there is no mention of the color blue, despite his numerous descriptions of the sea. Neither is blue found in far more ancient texts, from China to India, to the original Hebrew bible. The ancient Egyptians, for whom the color blue denoted celestial status, were the only exceptions. Though their influence was vast, words for blue didn’t appear in the world for millennia.

Our ability to perceive color has long been debated in fields of science, philosophy, and linguistics. Hard science tells us that all the colors our eyes are equipped to see are, and have always been in the world around us. Blue is extremely rare in nature, while reds, greens, and yellows are abundant, and the distinctions between them, more pertinent to our survival. The color of the sky and the reasons for its blueness are less relevant. Blue is an abstraction, a luxury of perception first noticed, then named.

What intrigues me most about color perception, and in particular, the anomaly that we encounter as the color blue, is that the very basis of its understanding overlays science, history, philosophy, art, and language, yet cannot be contained by any one discipline. Ever since our species found something blue, we have wondered about it, worshiped it, and attempted to explain it. One of my favorite examples of these unions is Maggie Nelson’s Bluets, a book of numbered entries that are not quite essays, and not quite poems, that wander across the disciplines of blue.  Nelson notes that Goethe “worries over how to “keep the essential quality [of the thing] still living before us, and not to kill it with the word.’”

Goethe perhaps would rather the mysterious experience of color be allowed to stand, much like Keats who later wrote that science does “unweave the rainbow.” Both Goethe and Keats took issue with Isaac Newton, who stuck sharp objects into his eyes to try to understand whether colors came from within the structures of the body, or were ethereal gifts from the heavens, or measurable material substances. To many, the science behind our cherished mysteries threatens to remove the romance, the veneer.

As Maggie Nelson tries to remember how to explain why the sky is blue, she writes, “As one optics journal puts it, ‘The color of any planetary atmosphere viewed against the black of space and illuminated by a sunlike star will also be blue.’ In which case blue is something of an ecstatic accident produced by void and fire.” Though mostly played at odds with each other, the same impulses of wonder and curiosity are behind both scientific and creative endeavors. Perception and observation need both what is within us and without.

No one yet has been able to reconcile the argument of nature versus nurture in the animal kingdom, let alone our own species. How much do our specific cultures and languages shape what we perceive?  Why did it take so long to see blue if it’s always been there and we’ve always had the mechanisms to grasp it? Newton, who introduced the term “color spectrum” assigned it seven colors because he wanted it to align with the seven days of the week, the seven notes of the diatonic scale, and the seven known planets. So the Roman calendar, and Christianity, had something to do with how we name color, as did some very outdated knowledge of the cosmos. History has a way of reassigning perspectives.

Some of the oldest mines in the world are in the rugged mountains of northern Afghanistan. There, lapis has been mined for millennia. Ancient Egyptians carved amulets, figures, and brooches in lapis, adorned themselves with it in life and afterlife. It is said that Cleopatra wore powdered lapis on her eyelids. Ultramarine pigment, which means “beyond the sea,” was first made from lapis in sixth century Afghanistan. By the time it made its way to Venice it was worth its weight in gold. A painter depended on wealthy patrons to obtain ultramarine, which was often reserved for religious scenes. Michelangelo couldn’t afford it himself, while Vermeer brought his family into insurmountable debt to have the blue at hand.

The social and cultural implications of our fascination with the color blue continue past the renaissance. In 1703, the year before Newton published his findings on light and color, Opticks, a German colormaker fashioned the first synthetic color, Prussian Blue. This blue, made more readily available and affordable, was the blue of Hokusai’s The Great Wave off Kanagawa, and one of the few colors that Picasso used during his famous Blue Period. Markets and entire economies revolved around the demand for blue, from hand-painted porcelain, to indigo dye, one of the first major commodities that fueled the African slave trade and the establishment of plantations in the New World. By the time of the American Revolution, indigo was a more reliable currency than the dollar.

It does take away some of the magic of perceiving a color to know this. Or what I wonder now about blue is what exactly we are trying to grasp in it. What’s to own in a color beyond the perception of it? Along with wonder and curiosity, greed is another of our inexplicable human impulses, and so is language, all of them mixed to make our history. There are no edges to the ways in which we can see ourselves, no real boundaries between the disciplines we use to understand the world. After considering much more blue than I’ve had the space to offer here, Maggie Nelson ends “Bluets” with the admirable, multidisciplinary, and very humanistic line: “When I was alive, I aimed to be a student not of longing but of light.” It’s a lovely intention she offers from this side of the history of blue.