Home
»
Uncategorized
»
A World of My Own

When I was a kid, I would spend hours drawing maps of fictional towns. Sometimes, it would start with a river running down the page; other times, a mountain. Each street I added carried a name. Construction would continue over time: homes, schools, hospitals, even sport stadiums (Melville, home of the Whalers).

Businesses would come and go. Children grew up and bought houses of his or her own. Occasionally, families moved away. The map would not only grow but change over time, and while it organized information, it also told stories even before I realized I could put them down on paper. As Michael Chabon once said, “You invented a world, and you did it in a very detailed way, and you told stories that were set in that world.”

Sometimes, I would read a book and create a visual map of my own: the Copenhagen of Lois Lowry’s Number the Stars, Devon Academy in A Separate Peace, Ray Bradbury’s Green Town, Illinois. (You can view Bradbury’s own sketch above.) Many of the early books I read were already accompanied with maps: E. H. Shepard’s illustration for Winnie-the-Pooh, Pauline Baynes’s endpaper for C. S. Lewis’s Prince Caspian, and, yes, J. R. R. Tolkien’s Middle-Earth (which Baynes also illustrated for the 1970 Ballantine Books edition).

However, the maps more often than not hindered the reading experience, similar to how music can manipulate my emotions during a film or television show. As a reader, you produce the space of the novel as much as the writer, drawing from your own memories and experiences.

Eric Bulson, in his 2007 book Novels, Maps, Modernity, examined this space created by the writer—and the stories concealed beneath its two-dimensionality. Speaking of James Joyce, Bulson writes, “the Dublin of Ulysses doesn’t change, we do. Every generation of readers comes to this novel with different set of ideas about how the space can be imagined, represented, mediated, and decoded.”

Joyce himself also frequently used maps to assist his world-mapping, calculating “to a minute the time necessary for his characters to cover a given distance of the city.” Joyce wasn’t alone; Herman Melville used whaling charts for Moby-Dick and Thomas Pynchon used Baedekers aerial maps in Gravity’s Rainbow among other short stories.

With the advent of web mapping technology, I tend to find myself on Google Maps when I’m stuck with work (or bored). The task of drawing out the roads and rivers and homes is already done, an empty slate to tell a new story, just as Joyce used Ordnance Survey maps to create his fictional worlds. Type in any town. The overview map doesn’t show much: a handful of the surrounding towns, major interstate and U.S. roads in varying shades of yellow, a few rivers and lakes snaking across the landscape.

When you zoom in, though, less-traveled roads start to take shape; a few parks materialize. Who knew there was a golf course along the coastline? Zoom in even closer: the hospital where I was born (hypothetically); the cemetery where my great-grandmother was buried (or was she cremated?); whose idea was it to have two Maple Streets in the same town? 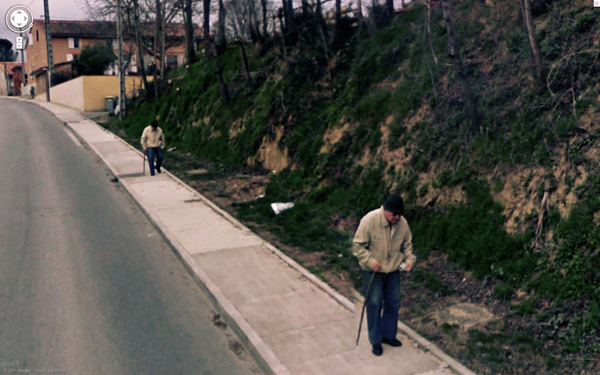 However, the story really starts to take shape the moment you drag the little human figure (named “Pegman,” no joke) over any street that lights up blue to turn the entire map into a Street View viewer. Move down the road, as if you’re walking. Cars and cyclists pass in the blurred motion. You follow a Mitsubishi ahead of you for a couple blocks—and then, suddenly, it disappears. Pedestrians come in and out of view—only to reappear again—and you can’t help but ask, where are they going? A group of men—post-work?—stand outside a bar smoking cigarettes; they all three stare at something behind you but when you pan across the street you see nothing there. Is there something you’re missing in this alternate universe?

Writing is about control, but also letting go once those words are out in the world. All a writer can do is to empty the space of the story in order to allow the reader to inhabit it. “No city indeed is so real,” in Virginia Woolf’s words, “as this that we make for ourselves and people to our liking.” But that doesn’t mean that a real city can’t be the start, in a piece of writing, for something much, much better.