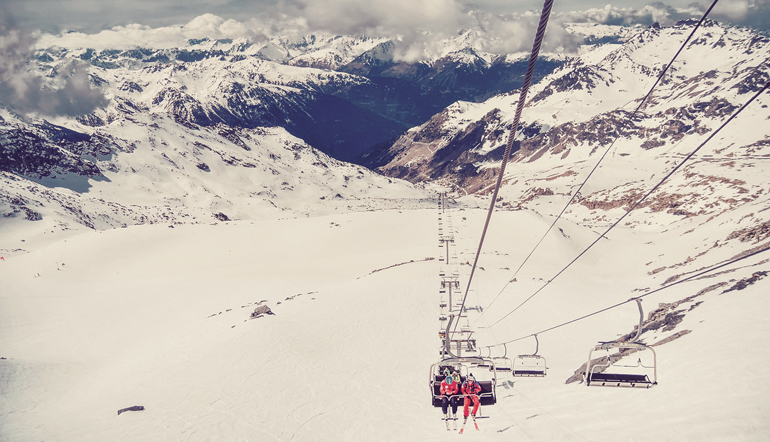 Last week, the New Yorker released the first English translation of Italo Calvino’s “The Adventure of a Skier,” which first appeared in the 1970 short story collection Difficult Loves. But how does this “new” story fit into the themes and philosophical musings of the work as a whole? “Skier” is superficially similar to many of the stories found in Difficult Loves, since it depicts a lead character in the throes of existential angst. However, it is the first to present an optimistic alternative to the protagonist’s existential unease: another character who explicitly embodies Calvino’s theory of Lightness.

Judging from the stories that were translated to English, the “Adventure” stories in Difficult Loves are all concerned with an existential sense of alienation. “Adventure of a Bather” follows a woman who is swimming in the ocean when she realizes she has lost her bathing suit, which causes a sense of profound detachment from the other beachgoers: “On the beach the great umbrellas with black and yellow concentric circles were casting black shadows in which the bodies became flat, and the teeming of the bathers spilled into the sea.” In the particularly dark “Adventure of a Photographer,” a man descends into half-madness in the pursuit of capturing “real life,” rips up all of his photographs, and comes to the conclusion that “perhaps true, total photography, he thought, is a pile of fragments of private images, against the creased background of massacres and coronations.”

At first blush, “Adventure of a Skier” fits into this collection seamlessly. The protagonist—an unnamed boy in green goggles—feels uncomfortable moving through the world to the point that he is having a mild existential crisis. In the face of a girl who can ski naturally and effortlessly, he is unable to smile back at her “because when she lowered her eyelids he felt as if he’d been erased.” However, unlike the other stories that have been translated into English, “Skier” provides a model for transcending existential angst: the girl in the sky-blue windbreaker, who embodies Calvino’s version of Lightness.

The concept of Lightness was popularized by the writings of Milan Kundera, particularly in his existential novel, The Unbearable Lightness of Being. Kundera contends that existence only holds weight if it recurs over and over again in perpetuity. Humans, on the other hand, cease to exist after a relatively short life, while the cycles of the universe continue as they did before. As a result, Kundera claims that humans experienced an “absolute absence of burden,” and a lack of existential “weight,” or meaning. “Life which disappears once and for all, which does not return,” Kundera writes, is “without weight . . . and whether it was horrible, beautiful, or sublime . . . means nothing.”

By contrast, Calvino’s conceptualized Lightness, not as an alienation from the permanence of the world, but as a freedom from the oppressive weight of everyday burdens. He viewed literature as an all-important vehicle toward Lightness, since it encourages the reader to change his or her perspective, to achieve a higher state of consciousness and become better equipped to face reality. He directly contradicted Kundera, and claimed that the perpetual cycles that make us feel tied to the world are actually the sources of the sense of oppression that pervades the human condition.

The Unbearable Lightness of Being is in reality a bitter confirmation of the Ineluctable Weight of Living. . . . His novel shows us how everything we choose and value in life for its lightness soon reveals its true, unbearable weight.

In keeping with this theory, the boys in “Skier” are literally and figuratively weighed down by their own presence in the world. The story opens with a flood of minute details about the struggles of using the ski lift while weighed down by heavy ski gear; the boys find themselves “often resting their weight on the neighbor below,” using a “flurry of small disjointed gestures that coursed through the line and became frenzied at the front,” as if physical awkwardness is a contagious, quickly proliferating disease.

But then, the boys see a girl in the sky-blue windbreaker who does the unthinkable: she bypasses the line and the “jerkily” uncomfortable ski lift and simply climbs up the hill using her own climbing skins. The narrator describes her as moving “easily” and “nimbly,” her knees moving “rhythmically” in time with the movement of her poles. The boys ascend in the lift “after many initial stumbles and false starts,” and then proceed to fall spectacularly down the mountain, while the girl simply continues to climb to the top on her climbing skins. Then, when she reaches the top, she skis down the mountain with eerily perfect grace.

Her movements were as simple as possible and perfectly suited to her person; she never exaggerated by a centimetre, never showed a hint of agitation or effort or determination to do a thing at all costs, but did it naturally.

The boys represent the inverse of Calvino’s theory of Lightness, not only because their lumbering physical presence and clumsiness is emphasized throughout the story, but because they erroneously believe that their “weight” in the world will cure their existential unease. The protagonist “hurtled straight down, so that he’d appear bold and at the same time hide his clumsiness on the turns.” “For the boys,” the narrator says, “a champion was someone who sped straight down like a lunatic.” Similar to Kundera’s conception of Lightness, they believe that moving heavily through the world will help them cut through the chaos, but instead, they ski down “awkward” and “heavy,” snapping their christies and descending in a “messy downhill tumble.”

By contrast, the girl in the sky-blue windbreaker descends “lightly” and “unhurriedly,” which makes the boys exhale in relief. They scoff that “she’s no champion,” until they see that, as a result of their many fumbles, she is beating them down the mountain. They become blinded by the sleet and shout their way down, losing each other in the process, while she confidently makes her way down, “flying this way and that as if on a violin string.” She doesn’t need to see anything or hear anything, because she has already decided the best path to take based solely on intuition, almost as if it were predetermined.

But the girl’s achievement is not “winning” some kind of race with the boys, or even escaping the chaos and confusion of the world in a Buddhist-esque enlightenment. Instead, she is simply cutting through the chaos to forge her own path in life based on a heightened perspective; she does not escape reality, but better equip herself to face reality by moving through the world lightly and appreciating beauty. She smiles throughout the entire story, and is shown to be one with nature rather than fighting against it. Where the boys hide from the sun, she laughs directly at it, and when she and the boy with the green goggles climb to the apex of the mountain, she is able to catch a glimpse of a white hare while he just barely misses it. Even her primary descriptor demonstrates that she is unified with the world around her; her “sky-blue” windbreaker is contrasted with the “precise yellow drawing” of the sun, as if she has managed to become welded to the landscape.

When elaborating on his theory of Lightness, Calvino clarified that he was not advocating for “escaping into dreams or the irrational,” but rather “looking at the world from a different perspective, with a different logic and with fresh methods of cognition and verification.” While the boys are mired into the paths forged by countless skiers before them, the girl finds a path that has never been traversed before, one that allows her to move with the forces surrounding her rather than against them. By changing her perspective, she becomes a harmonious, integrated part of the world, rather than a fleeting phenomenon that holds too tightly to the physical world in a futile attempt to achieve permanence.

Her figure, faintly sketched . . . remained the only one that could be picked out and followed, removed from chance and disorder. The air was so clear that the boy in the green goggles could divine in the snow the dense network of ski tracks . . . and it seemed to him that there, in the shapeless jumble of life, was hidden a secret line, a harmony, traceable only to the sky-blue girl, and this was the miracle of her: that at every instant in the chaos of innumerable possible movements she chose the only one that was right and clear and light and necessary, the only gesture that, among an infinity of wasted gestures, counted.

Tags:Difficult Loves, Italo Calvino, The Adventure of a Skier