Home
»
Interviews
»
“All the Leading and Leaping”: An Interview With Kathy Fagan 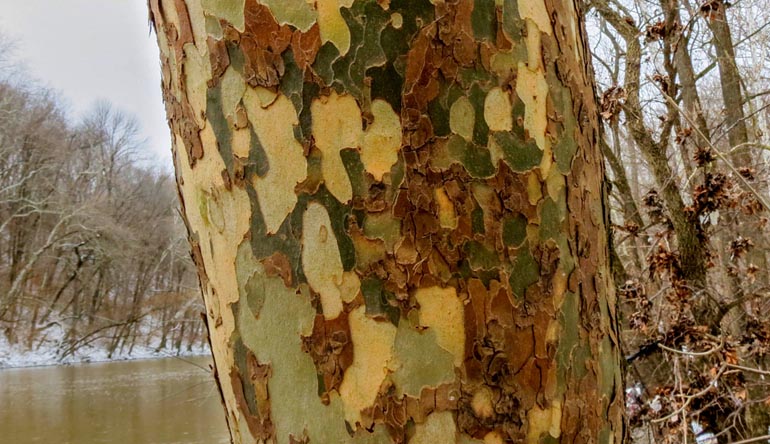 Kathy Fagan’s poems explore the mysteries in the matter-of-fact; they bring a sharp eye and tender heart to the exact and strange particulars of life. Her fifth book of poems, Sycamore, was published earlier this year. Her previous books include The Raft, MOVING & ST RAGE, The Charm, and Lip. Kathy directs the MFA program at Ohio State University and serves as poetry editor for OSU Press and adviser to the Journal. We caught up recently over email to talk about her beautiful new book.

Matthew Thorburn: Trees are a vital presence throughout this collection, and the sycamore feels like the thematic magnet that draws the poems together into such a tight-knit (though stylistically very diverse) collection. Would you talk about what the sycamore means to you and your poems?

Kathy Fagan: The poems were originally made as self-portraits; one survives as such in the book, “Self-Portrait as Sycamore in Copper & Pearl.” I’ve long been drawn to persona and the painterly, so self-portraits made sense to me at the time. But as my research into the tree deepened, and my photo collection grew—there are many spots here in Ohio, and all over the world really, to look at sycamores, and I was simultaneously photographing and writing about them—I realized that I wanted to capture the essential beauty of the tree in transient light, weather, and seasons. During that process, a long-term relationship of mine ended abruptly; I turned to the trees for strength, which they gave me, along with a figure for my grief. I suppose that, as a city kid raised on fairy tales and Irish folklore, all of nature was imbued with magical dignity for me, and that’s never gone away.

MT: What is your writing process like? How does a poem start for you? Do you keep a notebook?

KF: Oh, I used to keep notebooks, all through childhood, up until fairly recently. Now I just take notes in them; they’re workbooks rather than journals. Poems begin for me as handwritten notes actually: an image, overheard speech, a spin-off of something I’ve read, a rhythmic phrase. I rarely have the free time to get to these immediately, so they pile up, souvenirs of my days and weeks. Eventually I sort through them and something takes hold, attention is paid, more gets written, then more. I research material: remembered bits, histories, details, etymologies. I learn so much writing poems. And then I walk. A lot. I’m not sure how it comes together—all the leading and leaping!—but when the elements do start to combine, I begin, almost automatically, to arrange the lines and rework sentences. That’s the poetry part, to my mind: organizing the discoveries the poem wants to make in sentences that also work as line units—variable breaths of what I like to think of as the surprising inevitable.

MT: More particularly, how did “Caro Nome,” the beautiful opening poem in Sycamore, start? Would you tell us about your experience writing that poem?

KF: My grandfather retired from the Coty powder factory with white lung. There was a period I collected powder boxes and compacts from the ’30s and ’40s, his era. One such (not manufactured by Coty) was called “Caro Nome,” Italian for “dearest name,” which is a notion that’s haunted me for a long time. I noticed over the years that the names things have and the names I have for things are often different—and that led to a meditation on how things get named and why, and how odd it is especially to give to the animals we live with (cats, dogs, etc.) such a host of endearments which they cannot, presumably, understand. When my beloved bruiser of a kitty passed in the course of writing Sycamore, I wondered, in particular, how he heard me saying goodbye to him, and that gave voice to the poem.

KF: I only write enough to sustain one book at a time; I sometimes wish it were otherwise. I’m working on a sixth collection that’s nearly complete. It’s related to Sycamore in that it, too, is interested in the natural world. But the new manuscript is engaged with how that world is preyed upon—and how the act of writing, which is perception, is one form of predation. Sounds ominous, I know. To make matters worse, the poems are written from the perspective of an aging, child-free woman, so I’m finding lots of ferocious gyno-centric energy in the work. After hearing me read a handful of the new poems, one of my grad students said they’d frozen his ovaries off, which I liked very much.

MT: Lastly, what have you read recently that moved you?

KF: I read as much prose as poetry when I can. I adored Elizabeth Strout’s My Name Is Lucy Barton, which read like a long poem to me. In poetry, I had reason recently to return to Gluck’s The Seven Ages, a flawless book, I think. And I love to read books that are generative, like Amanda Nadelberg’s Songs from a Mountain or Lo Kwa Mei-en’s The Bees Make Money in the Lion.