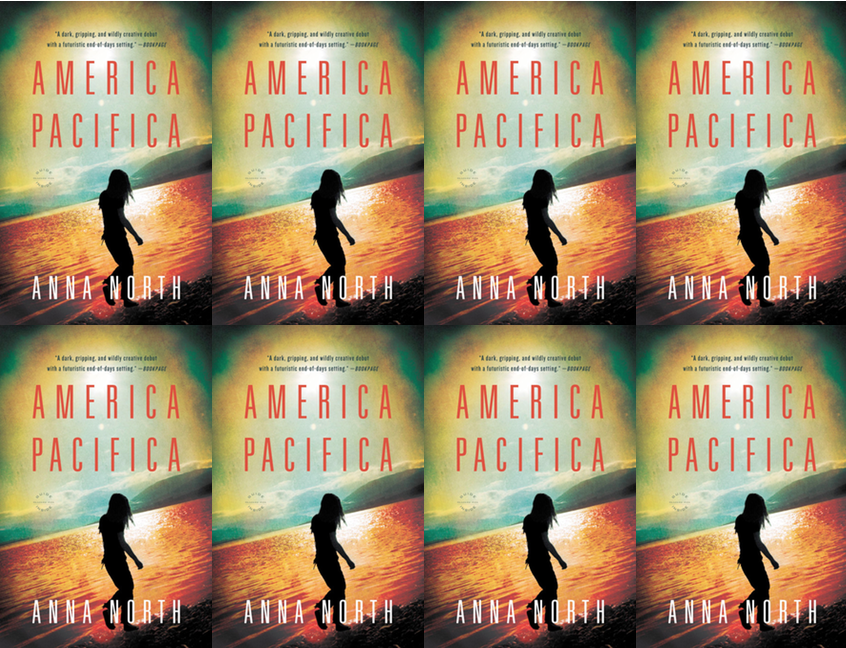 In her debut novel, Anna North dares to enter the dystopic territory staked out by the ruling high priestesses of literary speculative fiction, Margaret Atwood and Octavia E. Butler: America Pacifica features an ordinary heroine with an extraordinary destiny; a punishing climate; and a morally bankrupt, resource-scarce future that is eerily reminiscent of our present.

The titular island has become the last refuge for waves of migrants escaping the Western United States, which has frozen beyond habitation. Instead of learning to adapt, fifty thousand survivors from “the mainland” opted to sail to the steamy climate of America Pacifica. While no explanation is given to resolve the extreme differences in the neighboring settings’ temperatures, the novel’s counterintuitive premise establishes a pervasive sense of unease.

The earliest pioneers who came to America Pacifica on a repurposed cruise ship–the “firstboaters”–enjoy unparalleled privilege, their extravagant lifestyles identical to those of the pre-frozen mainland elite. Meanwhile, the impoverished lastboaters, whose tax dollars bankroll the firstboaters’ whims, get by on “cheese food,” powdered jellyfish, and seaweed products, living in shelters and clothing made of the ubiquitous (and impressively versatile) Seafiber. Tyson, the first and only leader of America Pacifica, perpetuates this power disparity without interruption thanks to the island’s system of sham elections.

Given the unyielding social hierarchy on the island, Darcy Pern, the novel’s eighteen-year-old, America Pacifica-born heroine, is an immediately compelling figure: her mother, Sarah, was a prestigious firstboater, but the Perns live like working-class lastboaters, toiling and scavenging for subsistence. This is our first clue that something is amiss in Sarah Pern’s past, and when Sarah disappears, Darcy is forced onto a journey to uncover America Pacifica’s young secrets.

Darcy doesn’t have to look too far for answers on the small, cramped island. North’s scaled-down vision of the future diminishes the novel’s dramatic stakes, but it serves to personalize the America Pacifica experience for Darcy, and for the reader. The islanders whom Darcy encounters serve up large swaths of narrative in extended monologues, making Darcy’s search seem less an epic quest than an intimate tour of depredation and survival.

Nostalgia for the mainland pervades the tropical settlement, with replicas of the founders’ former home bearing names like Manhattanville, Little Los Angeles, and Chicagoland; the author studs these with precious details such as a Hollywood sign and the Sears Tower. The islanders’ stubborn adherence to mainlandabilia sets up the novel’s core tension between the short-sighted, indulgent firstboaters and the innovative lastboat radicals, who eventually become Darcy Pern’s allies.

America Pacifica presents a binary world, with hot weather and cold, rich people and poor. Darcy and her mercurial compatriots relieve these stark contrasts as they scrabble for power, wealth, or survival, propelling the island to the brink of revolution. North does herself a disservice by placing her characters in a small setting that contains only limited mysteries, but with the speed of the concluding drama, she delivers a satisfying, if unsettling, peek into the conflicts that threaten our future.