Home
»
Writing
»
American Poetry: Video and the Evolution of Language 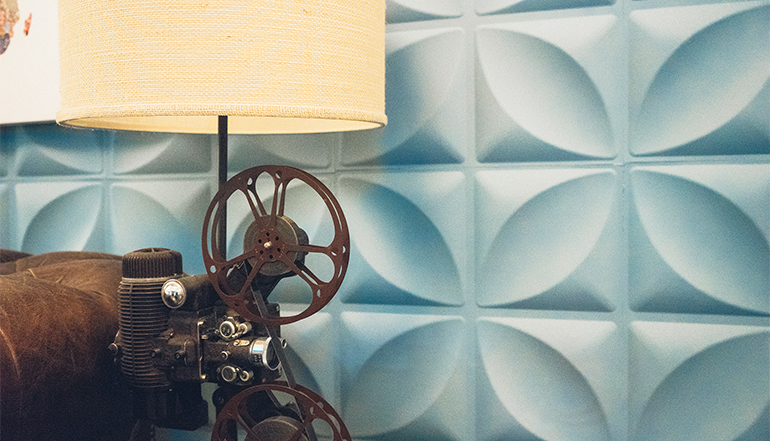 The moving image is the antithesis to a static image and therefore closer to poetry than painting. For millennia, poetry has been the sister art to painting, but poetry is not composed of “static objects extended in space but the life that is lived in the scene that it composes” (Wallace Stevens, The Necessary Angel: Essays on Reality and the Imagination). Poetry is dynamic and to understand the varied human experiences one must examine the stories it tells. It is moving images, film, video that brings us closer to the life that is lived than painting. Video complements and translates the written word.

Writer David Campos acknowledges that video “serves to enhance the experience of a poem.” The composition of a video must encourage the reader to return as does a good poem. Campos states, “A good film must bring you back for repeated viewing.” A poem serves as a guide for the poet to transfer images into film. But it is in the editing process that the magic of composition comes together. In Campos’s most recent poetry film he notes the changes in his composition—the attention to detail during the editing process is vital. “In the editing process that I say to myself, If I’m going to represent the same images found in the reading of the poem, then how can I show those images in a new light? I find my answer in editing.”

It is in the use of sound that Campos finds the solution to enhancing his video poems. His most recent composition, “Exercise in the Face of Divorce,” Campos demonstrates how sound and video create meaning and resonance beyond the written word. About this current composition Campos says,

Sound can carry an image…. In “Exercise in the Face of Divorce,” I focused on capturing sound in the shots—this enhanced the poem. All the film criticism I’ve read came into play while shooting and editing the video. I framed and composed shots from the beginning to add meaning. I was conscious of the color while shooting and editing. I edited the footage down to their essential parts. Most importantly, I added sound from the shots themselves. These projects are not “video poems.” They’re short films and they must be treated this way. It is why I use a story board and a rough script from the beginning. The same care I would exhibit in creating a poem on the page must be taken through its production into a film.

In video, I find the transformative power of poetry. Just as Gregory Orr finds “in poetry the transformative power of language,” video (image, music, imagination, and sound) transcends culture and time to transform language into a powerful and compelling new form of poetic expression. To understand the composition of a video there must be a relationship between images and language. Words form sentences and through context a story or idea becomes present for the reader, so do images in a video. In a video, the composition of images take on a syntactical importance. Through editing, the images of a video poem provide the viewer with a story. The choice of images, like diction, provide the reader with imagination and, finally, the use of sound, in voice and/or music, contextualizes the emotional weight of the poem. It is these formative elements that are used to compose a video poem.

Poet Vickie Vértiz’s video enacts something deeper that is tied to the oral tradition of poetry. For Vértiz, video provides egalitarian access that print production doesn’t always offer; even a glimpse into the past is possible through film that the present cannot provide.

In her video, “Pets” (produced by Kenji Liu), black and white footage of rural life is juxtaposed with cinematic footage of the early twentieth century film star, Dolores Del Rio. Through this pairing, Vértiz parallels film mythology with her own familial history. The only sound we hear in the video is Vertiz’s own voice reciting the poem. For Vértiz, “poetry will always will be oral,” as she recently told me. The video relies on the reader’s attention to the moving image and to the language of the poem drawing attention to the speaker’s inflection and story.

Language is fluid and constantly evolving to more accurately represent the world around us. Walt Whitman may have begun the poetic tradition of capturing details of daily life in his collection, Leaves of Grass (1855). In subsequent generations, poets have sustained this idea by using language in new and innovative ways: William Carlos William’s sharply imagistic poetry and prose in Spring and All (1923), is influenced by early cinema, relying on the importance of imagery. Written almost half a century later, Frank O’Hara’s collection Lunch Poems (1964) reflects the influence of popular culture, with poems featuring cultural figures like Miles Davis, Lana Turner, and Billie Holiday. Harryette Mullen’s Sleeping with the Dictionary (2002) demonstrates how culture has affected language; Mullen transforms language to offer readers a new perspective on the human experience. It is the culture and the time of the poet that influences the unique content and specific means of poetry—the way the human experience is depicted and delivered in a poem.

It is language, then, which provides us with a common union. Mutlu Konuk Blasing explains it best in Lyric Poetry: The Pain and the Pleasure of Words (2007) when she describes our acquisition of language as a “personal-communal” history. It is through language that individuals can share in the underlying or inherent connotation of words. Despite the differences in language among humans, when shown an image for an object we can name it in our own way. It is the power of the image that enables language to transcend culture and time.

In “Estrellada,” a video poem by Vanessa Angelica Villarreal, she documents moments from her childhood to investigate memory and that which is irretrievably lost. Villarreal shared with me that this poem “imagines the border, and the urgency of a crossing, as a psychological and generational rupture that widens and widens inside the body and mind of the crossed.” The elements of this video encompass the formative elements of sound and music to complement story and the poet’s imagination.

The composition of poetry has taken on a new life. Poetry has evolved from oral and traditional forms, to print and performance, and to our present moment where an amalgam of all forms is possible with technology. Video is a revisiting of the oral and performative traditions of poetry in a contemporary context. Moving images can address the human experience and maintain the complexity of ideas, range of emotions, and clarity of language as does written poetry. One of the most comprehensive sites for video poetry is Moving Poems curated by Dave Bonta, which has been around for almost a decade. The site describes itself as “on-going anthology of the best poetry videos from around the web.”

In the future, upon inspection of the evolution of our language, video poetry will be looked at and held to a similar standard as poetry on the page, imbued with elements of story, music, imagination, and sound. Video is not a substitute for the poem itself, but merely a translation of the written word by contemporary means.