Home
»
Book Reviews
»
America’s Saturday Church: On My Conference Can Beat Your Conference by Paul Finebaum 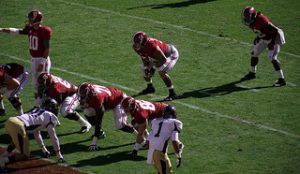 I could travel the world for years and never get halfway through my bucket list of all the sporting events I’d love to attend in person. But certainly one thing way up high on that list is a fall spent deep in America’s South, watching Southeastern Conference college football. And I’m saying that from up here in the gray Northwest, where it seems like every other business is adorned year-round with the number 12, a show of solidarity with the reigning Super Bowl champion Seattle Seahawks. Still, Seattle’s famous football (and football) mania looks like a passing hobby compared to the mania that overtakes the diagonally opposite region of the country during football season.

Home to a disproportionate amount of the nation’s best teams, the fourteen-team Southeastern Conference plays the best college football, backed by the largest and most ferocious fanbases. To attend an SEC game for the first time would be, I’d imagine, similar in more ways than one to attending a service for an unfamiliar religion. There are songs and chants that everybody else knows the words to, and very specific protocol for when to sit, stand, scream. Every stadium is a denomination unto itself, with pre-game traditions and theatrics that inspire awe with their scale. Picking at random, here are the 80,000+ parishioners of Auburn University’s Jordan-Hare Stadium as they watch their “War Eagle” make its traditional soar down onto the field:

With about a dozen game days a year, evidently what an SEC fan does to get through the rest of the time is listen to Paul Finebaum–or, “The Mouth of the South” as I guess he goes by–talk about SEC football on the radio. Thin, bespectacled, and generally looking like one of Willy Loman’s co-workers dropped into the present day, Finebaum is not exactly what you’d expect your Southern sports talk host to took like. Since Finebaum haphazardly rooted for distant baseball teams while growing up–instead of being indoctrinated into SEC fandom as I’m sure so many Southern kids are–he doesn’t root for a specific team, but instead acts as an apologist for the SEC’s overall talent. Thus the title My Conference Can Beat Your Conference.

Sometimes Finebaum’s fervor coalesces into memorable one-liners: “Our championship teams have spent more time in the White House than the Secret Service.” And most of the time defending the SEC means venturing down a rabbit hole of bowl games won and lost, accomplishments met and not met by teams from other conferences. If you’re a big fan of college football you can probably even see Finebaum’s arguments coming–and if you’re a fan of a team from outside the SEC, he’ll probably get a rise out of you. Which, of course, is Finebaum’s main goal. Because Finebaum is at least as interested in (as am I) the passion of SEC fans as he is the specifics of SEC football. His career revolves around his radio show, and his radio show revolves around a small group of impassioned fans who have called in to say their piece so often and for so many years that they almost deserve co-host credit. Finebaum dedicates a heartfelt chapter to these callers, saying: “I could be interviewing President Obama, but I would bump him for Jim from Tuscaloosa.” Now that Finebaum’s show is simulcast on TV, we can see his reaction to a recent call from one of his most famous callers, Phyllis from Mulga:

Usually, when one adult calls another a “cow turd,” it’s in one of the Internet’s more useless comment sections. There’s a lot going on here, though, that’s separates this rant from regular, screamy sports-talk fare. For one, Finebaum lets Phyllis say her piece–all of it–without cutting her off or interrupting. There’s also the fact that Phyllis is such a prominent caller that the SEC Network (oh yes, there is such a thing) has a picture at the ready to display on-screen. (By at least one measure, Phyllis is the only notable citizen of Mulga.) But most importantly, as Finebaum describes in the book, they have developed a close enough relationship through the proxy of the radio show that when Phyllis falls ill with lung cancer (all the way back in 1996), he personally visits her in the hospital.

Finebaum doesn’t interrupt her because Phyllis’ rant is the show, and he knows that she’s just disappointed at the whole world for a bit since the University of Alabama has just lost. She’s calling him a cow turd, but, really, this is one of the reliable rhythms of a long-term relationship built out of mutual love.

My Conference is not an accessible entry point for newbies, but that makes sense, given that most of Finebaum’s listeners are lifers. If I ever get to one of the SEC’s blisteringly noisy temples I will not know when and how to genuflect, but it’s still a pilgrimage that I’d really like to make.