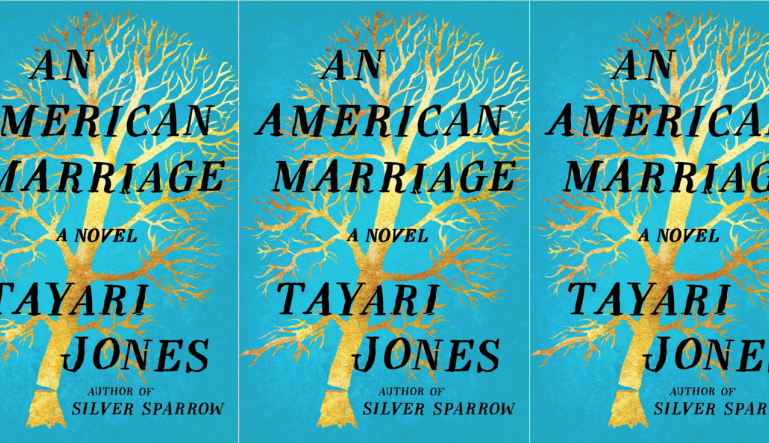 Tayari Jones is a wonderful storyteller. Her newest work, An American Marriage, is an intricately crafted novel that focuses on the specific lives of its characters and yet asks enormous and thought-provoking questions about race and incarceration in America. The novel opens with Celestial and Roy, a young newly-married couple. Accused of a crime he didn’t commit, Roy is sent to prison after the couple has been married for less than two years. He is released early after five years, and the couple must reconsider their marriage and their relationship to each other.

Anyone who has read Jones’s earlier works (Leaving Atlanta, The Untelling, Silver Sparrow) is familiar with her strong authorial voice and her careful construction of each sentence, paragraph, and chapter. Her attention to craft is paramount. The novel opens with a chapter narrated by Roy using the first-person point of view, and the opening section then alternates chapters between Roy and Celestial. Just when we’ve gotten into the formal rhythm of the book, Roy is arrested, and Jones wonderfully captures the shock of the arrest by changing the formal way that the story is told: the narrative becomes a series of letters for the five years that Roy is in prison. In another writer’s hands this temporary move to an epistolary novel might have been clunky, but here it so wonderfully underscores the events that have happened and the fact that the story has taken an irrevocable turn.

All of the novel is told through voice, whether through the first-person narrations, the dialogue between characters, or in the letters between Celestial and Roy. Jones nails each character’s voice; the primary characters, as well as the secondary characters that richen and develop this world, feel alive. The direct access to each primary character means that we learn how they think, in addition to how they act and feel.  Celestial writes to Roy, when he’s just in prison: “Up until now, I thought I knew what was and wasn’t possible. Maybe that’s what innocence is, having no way to predict the pain of the future.” The dialogue is always strong as well, teaching us about these characters and how they interact with each other and with the world. And here, too, Jones modifies the form of the novel to mimic the content: Andre, an old friend of Celestial’s, becomes a key character as the novel progresses, and he is therefore given an increasingly prominent voice in the narrative.

Equally impressive is the way in which time works in this novel. Jones deliberately plays with narrative time to vary the pace. The narrative slows down to explore, for example, the night in the motel when everything goes awry and then, later, when the couple see each other for the first time after Roy is released. Jones lets us stay in these moments, watching them unfurl in real time, sometimes letting us see the same scene from different points of view. We want to be there because we know and care for these characters, and we don’t want to leave their sides for even a moment. But elsewhere, time speeds up, most notably as the letters go back and forth during Roy’s incarceration. We watch, heartbroken, as the strain of Roy’s incarceration affects both Celestial and Roy.

While we hear a bit about life in prison from Roy in his letters to Celestial, Jones does not make the prison time a focus of the novel. She is more interested in exploring the impact of incarceration, not the incarceration itself: what does such a separation do to the people involved—not just to the prisoner, but to his family as well? What happens to a young couple when they are unjustly separated, when their dreams are shattered? When Roy was in prison, Celestial would occasionally see him: “… I had become accustomed to the stuttered breath, the dancing hairs on my suddenly cold arms and neck. You can live with ghosts.” It is telling that Jones chose to include an epilogue but not a prologue: she is interested in exploring the after-effects of an unfair justice system, not the origin story of how things came to be.

It is fascinating to read this novel alongside A Lucky Man, Jamel Brinkley’s debut collection of short stories, out in May from Graywolf Press. Different formal styles, for sure, but both Brinkley and Jones are interested in using storytelling to explore the larger racial issues in America through their finely delineated characters. These are real people, in real situations, and like all great fiction, we come to understand truths through their characters’ eyes. Both books open up new worlds to the reader, allowing us into spaces we may not have previously encountered or considered.

An American Marriage is an engrossing novel about many things, but at its heart, it’s a love story, a uniquely American love story. And while it focuses on romantic love, it’s also a novel that examines platonic and familial love, as well as the need and desire for home. The novel begins with Roy exclaiming: “There are two kinds of people in the world, those who leave home, and those who don’t.” By the end of the novel, Roy has been to prison and back, and his journey has changed his views, and ours, on the meaning and importance of love and home.