Home
»
Reading
»
An Aquarium in Paris 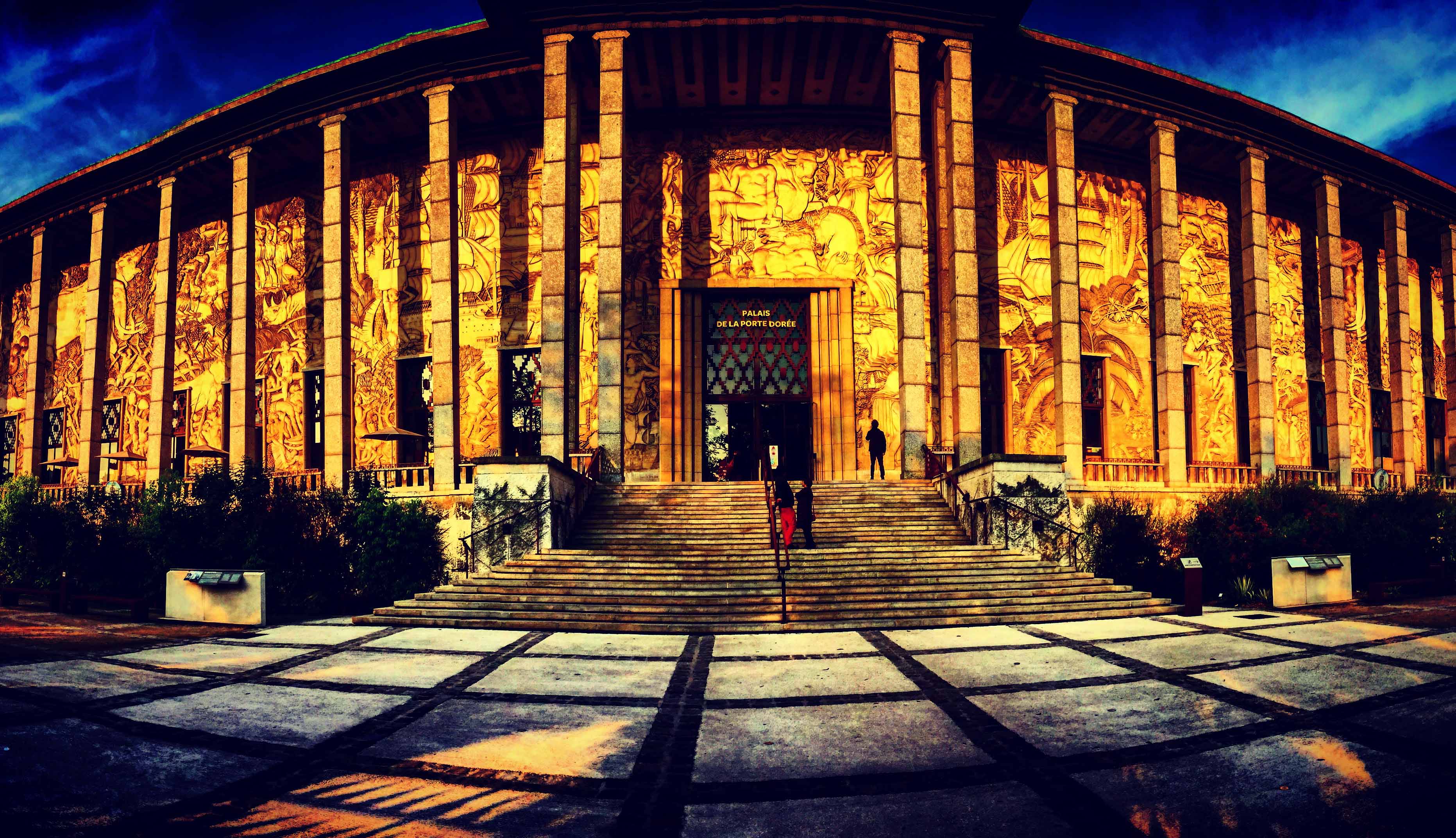 Sinking down the basement steps of the Palais Porte Dorée in Paris is to find it much as it was in its inaugural year. The hulking Art Deco palace was a centerpiece of the 1931 Colonial Exposition—a World’s Fair-type undertaking meant to reinvest French citizens of the interwar period in the “civilizing mission” of their brutal land-people-and-resources grab across Africa, the Caribbean, the Middle East, Asia, and Pacifica. Outside the palace’s doors, 34 million visitors to the exhibition strolled 500 acres of fair grounds where they took in large-scale reproductions of Angkor Wat and the kasbahs of West Africa, heard the jazzy strains of the Martiniquais Orchestre Stellion, ordered a drink from a Cameroonian man steeping coffee imported from the plantations, or glimpsed a mother from Madagascar, a performer really, daily bathing her son in an outdoor tub pooling with muddied water. Inside the palace, these anxious justifications for barbarous conquest are absorbed into its very walls. The exterior of the building is decorated with sculpted reliefs meant to emphasize the colonies’ economic contributions: racialized workers harvest rice and rubber and silk. Inside, the auditorium houses frescoes that are terrifying as they are lovely: warm colors swath lush flora and the bodies of subjugated people with elongated limbs as the French arrive self-importantly with medicine and commerce and religion. But the building’s subterranean level is perhaps the most peculiar. It is the only exhibit that remains in its original place and in, more or less, it’s original configuration: the Tropical Aquarium.

Ambling through the backlit tanks of “colonial” fish and peeping over the railing into the crocodile pits recently, made me think of the aquarium’s will toward metaphor. “The world rises and falls/each day/through the eyes of a fish,” writes the Iraqi poet, Dunya Mikhail. The murky, watery environments housed safely and symmetrically in glass cases provide a place for low-stakes interlocution with worlds that feel compressed, refracted, and wholly alien.

When the everyman protagonist of Japanese novelist Haruki Murakami’s The Wind-Up Bird Chronicle (1994) remembers his first date with his wife to an aquarium, for instance, he recalls being struck by her fascination with the jellyfish chamber. “Why do you like the jellyfish so much?” he asks her.  Her answer in this banal and unremarkable moment seems a pendant to the landmark epidermilization theorized by the Martiniquais philosopher, Frantz Fanon, in the 1950s. “What we see before us is just one tiny part of the world,” she replies. “We get into the habit of thinking, This is the world, but that’s not true at all. The real world is in a much darker and deeper place than this, and most of it is occupied by jellyfish and things. We just happen to forget all that. Don’t you agree? Two thirds of the earth’s surface is ocean, and all we can see of it with the naked eye is the surface: the skin. We hardly know anything about what’s beneath the skin.” But for as much as his wife sees promise in the tanks of jellyfish, Murakami’s protagonist can feel only fear. Once caught up in a swarm of jellyfish during an ocean swim, the animal fills him with a pupil-constricting dread.

Argentine Julio Cortazar’s short story, “Axolotl” (1952) about a man whose consciousness falls through the glass case of an aquarium tank and into an axolotl—the flabbergasting, evolution-defying Mexican salamander (get your Google images on, dear reader)—is another such example. Back in the colonial metropole of Paris, Cortazar’s narrator is drawn in by the “little pink Aztec faces,” the lethargic mobility, and the lidless eyes of the axolotl in the aquarium of the Jardin des Plantes. “The eyes of the axolotls spoke to me,” he writes, “of the presence of a different life, of another way of seeing.” The story has long been thought by critics to be the author’s self-conscious grappling with ethnic hybridity and difference. The aqueous, slow shuffle of the axolotl mirrors the Latin American elite’s laborious, protracted approach to the cruel histories of mestizaje.

A decade later, the U.S. poet, Robert Lowell, would compose “For the Union Dead” in which the aquarium served as a real and imaginary space to contemplate change. Lamenting the loss of the old South Boston Aquarium, its windows broken and boarded up in the midst of the burgeoning Irish-American neighborhoods, Lowell longs nostalgically for the seemly Boston of his boyhood days. Then, his “nose crawled like a snail on the glass” tracing the rising bubbles issued from the nose’s of “the cowed, compliant fish” across the surface of the tanks. Now, the television stands in metonymically for the vivarium of his youth and Lowell watches the violent integration of schools, writing that “the drained faces of Negro school-children rise like balloons” across the screen.

Much has changed at the Palais Porte Dorée. The building now houses the haphazardly curated national Immigration Museum. “That’s what they’re calling it now,” joked a friend when we visited. It has some beautiful pieces, but little narrative through line. The Colonial Exposition grounds have been converted into a shady, mellow public park, though the main avenue in the neighborhood is still lined with palm trees giving off more of an L.A. vibe than a Parisian one. But in the dimly lit basement, the Tropical Aquarium has stayed much the same. The fish circuit their tanks, a planisphere informs visitors of points of (formerly French) maritime origin, and the onlookers regard the aquatic captives with terrestrial and ignorant reverence.