Home
»
Interviews
»
An Interview with Jamie Ford, Author of Hotel on the Corner of Bitter and Sweet 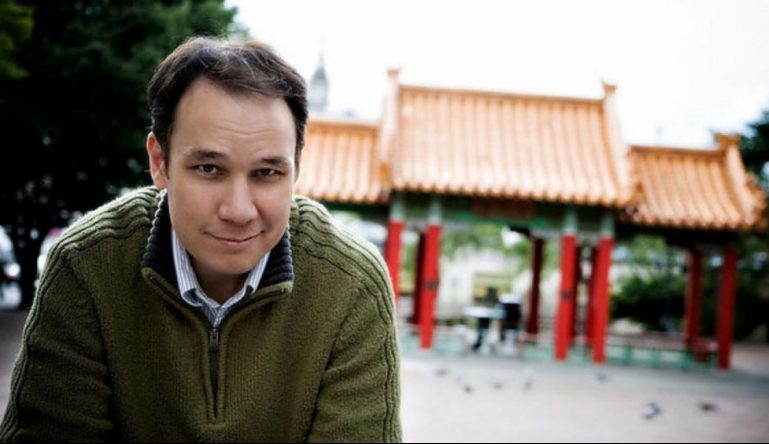 In his debut novel, published in 2007, decades after Reagan’s apology for the internment of Japanese-origin American citizens on American soil, Jamie Ford uses a sweeping, Titanic-like “frame” of the members of a young, current generation encountering a buried story that illuminates class and racial divides of the past. Henry, now elderly, reveals his own youthful experience of cross-cultural romance to his son, Marty, who is about to marry a white fiancée. One of the marvels of the book is that the sweetness of the gentle romance between Henry and his childhood love Keiko—really the sweetness of romance in general—is untainted by the bleakness of the political backdrop.

And yet, reading the book now, in Trump’s America, that bleakness is undeniable. As a member of a Muslim-American family, I read the scenes of bullying, shouting, burning, painting hateful slogans, and shooting with an immediate sense of dread, sorrow, and rage. I recalled the way it felt on the day after the election to look at any Muslim house with large windows or glass patio doors, remembering Kristallnacht; remembered the sight of the hateful Neo-Nazi, anti-Muslim slogans displayed hanging over the sides of bridges, or from the highway overpasses; the Trump rallies; Charlottesville. I thought of the two women who brought a dog into a mosque in Arizona last week, to defecate and urinate on holy ground, while they snatched up religious objects and pictures and spat on them, teaching their young children to do the same while chanting slurs.

In this sociopolitical climate, in which Ford’s Hotel on the Corner of Bitter and Sweet has remained on the New York Times best-seller list for an impressive and—yes—heartwarming 130 weeks, what sense can we make of the simultaneity of American curiosity, compassion, mutual respect, co-existing in a (book) world in which books such as ¡Adios, America! by Ann Coulter are also NYT bestsellers (albeit for 10 weeks)?

In order to gain some insight into the unique alchemy practiced by Ford as a writer of a book that, while making the plight of those excluded and discriminated against completely searing and unforgettable, is also simply just a compelling story, the kind of story that many different people (including Trump voters) obviously read and also loved—I interviewed him this winter.

Chaya Bhuvaneswar: How did you become a writer?

Jamie Ford: It started with a degree in art and design, and before that…before I was a writer I was real moody child. Even in late grade school through high school I wrote poetry, just so I had an outlet for an excess of emotion. I couldn’t turn off my feelings—at times my superpower, other times my kryptonite. I kept writing poetry and story ideas even in my sketchbooks. Maybe then in my twenties I realized fiction could be a useful medium just to process feelings. Really just to—it sounds odd, but I would just write to express how I was thinking, how I was feeling. In my early thirties I lost both of my parents—and I often say it, and sounds cheeky and dark—my writing career began when I wrote my parents’ obituaries. Everything I wrote going forward had a real emotional perspective. Young writers may not be able to write with emotional resonance because they haven’t been kicked around in life enough. That’s kind of my journey. My dad died from diabetes complications—it was a sudden turn, that was unexpected. Not long thereafter, my mom found out she had cancer and then she passed rapidly, with me and my brother being the primary hospice caregiver. She declined in three weeks and was gone. Within a year and a half I’d lost both parents and my last grandparent.

CB: I’m sorry—that is a lot of loss. Did your family know you as a writer?

CB: Can you talk about how you conceived of Hotel on the Corner of Bitter and Sweet?

JF: When I wrote the book, I meant it as a love story. I didn’t mean it as a statement of social justice. But I mistakenly assumed everyone knew about the internment. But then I quickly realized it wasn’t common knowledge and there are segments of society that really had no idea.

I was asked at the time if I thought it would ever happen again. I said no, but that answer has changed under the current administration. I do think there is a segment of society, they may not say it openly, but they would prefer to remain a demonstrably white dominant society, that there’s a comfort level there, going back to the 70s, when most minorities really struggled to reach middle class. I don’t know if it’s because people are just wanting to be comfortable, or to go back to the cartoon of the “good old days.” People want to go back to when Christopher Columbus was perfect and did nothing wrong. There’s a cognitive dissonance in holding multiple points of view and that holds for Trump and his supporters—they want to get rid of anyone else who wants to come here, they forget that their parents or grandparents came here.

I don’t think something like the internment could happen again because it’s logistically difficult. In World War II, the FBI could just go to banks and the banks would turn over Japanese names. Minorities were forced to live in certain neighborhoods. It was easier to round people up. It’s not so easy to do that now. It’s technically difficult. But if it was easy, I think there would be people who would champion that kind of activity. I do think though that this is the death rattle of a very racist generation and we’re almost through it. I visit high schools, etc. and for the most part kids don’t care. They don’t love or befriend one another based on cultural identity. It’s rather a unique expression of who they are, not something they use to beat each other over the head with. I’m hoping we’ll stop using race as an obstacle. I think we need to look at people as individuals for who they really are.

CB: Can you speak a bit about your writing process and rituals?

JF: I tend to work from an idea or a premise; I think of a beginning and an ending almost in the abstract; I sort of make up the middle as I go; I don’t outline. That being stated, I am exploring some new ways of working. I worked with a director this summer and she showed me a way of creating a nonlinear outline. She pushed me to think of themes, the most powerful themes of a story I want to tell, put them out there in no specific orders, and then take the box of scenes and move scenes around and see if there’s a better way to arrange those scenes. It was really useful. I went into it thinking it was going to be crazy, this vaporous idea from Hollywood. The next few projects will be done this way. It forces me to create a hard outline in that in the end, I play with the building blocks until I do have an outline. And I’ve never done that before—I’ve never worked from an outline.

CB: Any thoughts about working alone vs. with others, and where to find the others?

JF: I think everyone needs that one good reader, a wise reader. For some people that’s their partner, critique partner, or agent. For me It’s my wife. I haven’t found success in writing groups. I do have some other author friends whom I’ve bounced ideas off of and that works in an emergency. Maybe there’s someone who’s a total lone wolf, but I think we need someone to validate our convictions a little bit, someone who can be lovingly honest. I think that’s important.

Tags:A Hotel on the Corner of Bitter and Sweet, Jamie Ford