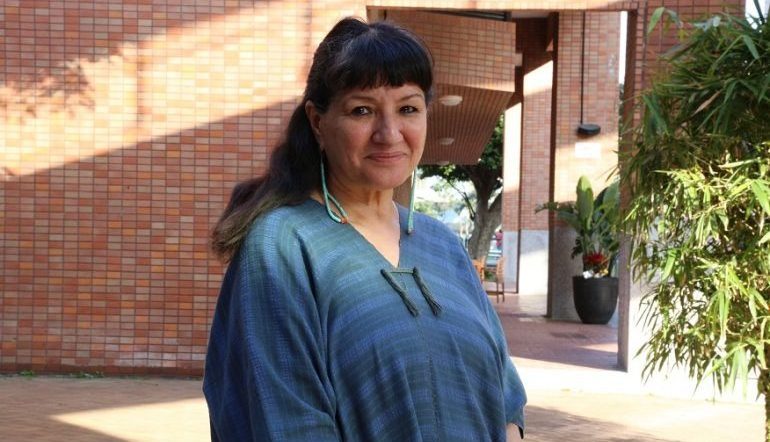 Although Sandra Cisneros is most widely known for her authorship of beloved fiction books like The House on Mango Street and Caramelo, she calls herself, first, a poet-activist. This is the title she believes most closely coincide with her fundamental goal: truth-seeking. Her journey toward a complex honesty stands in sharp contrast to a political society where it is common to avoid honesty, and more natural still to intentionally obscure the truth.

Cisneros’s truths are malleable. The exploration of childhood present in many of her novels unveils new ways to heal and revisit what was discovered and forgotten years ago. It is clear, too, that her work serves to analyze her life as a cross section of identities. As a mirror of both the past and present, Cisneros’s work remains a fascinating and constantly-morphing study of Chicana life.

I had the honor of speaking to Cisneros in March during her visit to Taipei, Taiwan; we discussed conduits of truth, living across borders, and femininity.

Shereen Lee: What do you think makes a poem?

Sandra Cisneros: I suppose we’re always trying to redefine that, right? I know a poem’s a poem when I have to invent the language for it. It’s an emotion for me, the same way that a pebble would force you to stop and take it out of your shoe. It’s like that, you know. I feel unbalanced, discomfort, until I take the pebble out of my shoe.

I feel that right now I’m looking for a way to jumpstart my writing and make it as meaningful and beautiful and powerful as it can be. I’ve been writing the same poem for a while. I’m looking for that writer that makes me go like, “ah!”

I do know I want to explore these things at the heights of my life at 63; I feel like I am getting more courage to say what I think and to explore parts of my life that might not have been that important in the past. I wasted a lot of time writing about love, because women waste lots of time writing about love. But now, I’m looking for love from more reliable sources. And I’m the happiest I’ve ever been with life and myself, I’m in love with the universe, and the universe is in love with me. I’m married to my writing, and he can be brutal but he never strays.

SL: Can you pinpoint the most important influence you’ve had in the past few years? What brought you to that change?

SC: Moving to Mexico has really changed me. I’m thinking in Spanish, I’m writing poems in Spanish. I’m making a lot of mistakes because it isn’t my first language, but I’m hearing the rhythms and the lyricism in a different way. Certainly living there, not as a tourist, and seeing Mexico close up without the veneer of nostalgia, without the romanticism of an outsider: to live there is different. I’m changed by the experience. I feel a kind of vulnerability, because I’m a woman, but I’m also feeling a respect because I’m an elder. Men revere mothers in Mexico, so even though I’ve never had children, living in Mexico has made me a mother. When I buy things, they call me madrecita, little mother.

Turning into a mother in Mexico is very powerful, because it’s the land of the great mother, of Guadalupe. A kind of sacred motherhood: the other immaculate conception, being a mother. The thing that is frightening, however, is that I’m an anomaly in Mexican society where single women are seen as spinsters, lesbians, or nuns. I’m none of the above. There are gringas who are single, but to be mexicana and single is very odd. So I find my Mexican women friends warning me, “Don’t tell the taxi driver that you don’t have anyone waiting at home. Tell the driver your husband is waiting inside and call out ‘Enrico!’”

You have to pretend you have these phantom families because you have to cover your tracks. Yes! You have to lie and create phantom husbands and phantom children to protect yourself. I don’t like to lie, I’m not very good at it, because my writing is about speaking the truth. So I find when I’m telling these tales to nosy cab drivers that I’m a little uncomfortable.

SL: It’s interesting that you view your fiction as so fundamentally different from the stories that you tell taxi drivers. To me, they both serve their own purposes, and they try to make your life a little happier, a little better.

SC: That’s kind of you to say, because I feel bad. But I do understand where I’m in a country where I have to defend myself. The women in Mexico can’t be wrong. They’re protecting me, defending me. Going to Mexico, anything can happen. So there’s that. I’m going to Mexico with a lucidity that there’s a lot of femicide. And there’s a lot of violence against women of all ages. You can be seen as someone that can be taken advantage of. That’s scary, to know that you’re in a country where a crime could happen and it would never be solved, no one would ever be punished. People disappear. Journalists write the truth and disappear. If you get raped or something gets stolen, that’s very little crime in a country of impunity.

SL: Do you find yourself at home in Mexico?

SC: Yes, and no. There’s a reason why I live in a tourist town—because English is spoken too, and English is my home. Spanish is my home. I do feel that you have to find yourself and then you become at home wherever you go. That middle place where English and Spanish straddle the border is a home, too. San Miguel is a homea crazy Times Square of a home. Texas is a home. When I go back to Chicago I often mistakenly say that I’m going home, even though I felt at home in Chicago. We have many places that are home. I’m quoting David White’s poem “The House of Belonging” and the last line says “Home is where you feel you belong.”

I feel I was ushered [to Mexico] by the spirits. I don’t know what work I’m being asked to do, but I know that Divine Providence always takes me to something I think I can’t do. I’m always asked to rise. Whatever I’m being asked, I feel I have divine guidance. But so do you, and so does everyone else on the planet. I’m conscious now of being guided by the light, for lack of a better word. And [it’s] asking me to do work I wouldn’t otherwise because I’m such a coward. I do know the circumstances are going to help me on the next phase of my life, my magical mystery tour. That I’m convinced of.

SL: How do you want to change?

I hope that I can write about things that haven’t been written about by women my age. I feel like society keeps a lot of things from you. I want to grow. I feel like a baby, like I have a long way to go before I can say I’m a writer. Was it Hokusai who said in his 70s, “If only I could have five more years, then I can call myself an artist!” or something like that? I feel like that, like maybe with time I could really call myself a writer, and maybe then I call myself a woman. It’s too much defined by society and what men, and church, and state. And I’m still stripping myself to remove myself from what they think. It’s been a process my whole life. And I’m just now in this wonderful phase. I feel like a dandelion seed. I’m in freefall, I’m excited. I hope that I’m going to leave the world like a sparkler. I want to go out with fire. I feel this urgency. A come on, come on, do more! I want to be like my heroes. Gandhi, Rigoberta Menchú, Cesar Chavez. If I could create work that could bring great change toward peace, that would make me the happiest writer in the world.