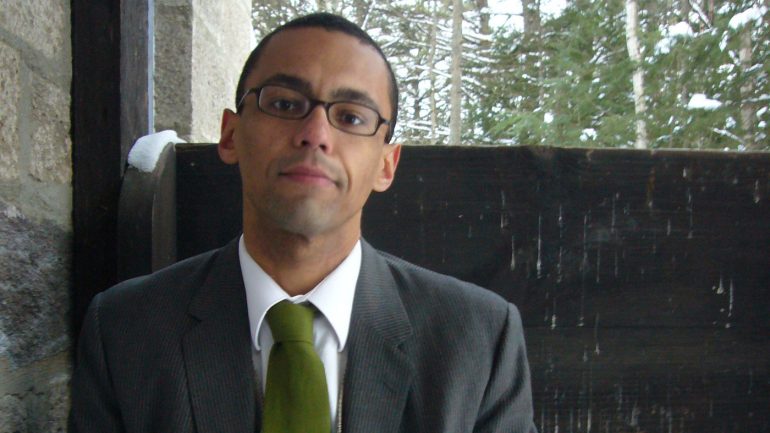 I learned about Victor LaValle, recent recipient of Ploughshares’s Alice Hoffman Prize, as I read an introduction to Shirley Jackson’s The Sundial, in which he recounts the humor, horror, and humanity he respects in her work. As someone who devours everything Shirley Jackson for the very reason he praises her, I immediately checked out his books. His writing is fresh, frightening, and utterly transfixing, jumping from reality into worlds that are strange, supernatural, and yet surprisingly familiar.

LaValle is the author of four novels and two novellas, including The Ballad of Black Tom, winner of the 2016 Shirley Jackson Award. His short story collection, Slapboxing With Jesus, is composed of linked stories following young men of color as they navigate an unfriendly world. His comic book, Destroyer, pulls Mary Shelley’s Frankenstein into contemporary America.

His most recent novel, The Changeling, is a loose retelling of an obscure children’s story by Maurice Sendak, laced with Scandinavian tropes and the magical, chilling mystery of classic fairy tales. A couple in love is torn apart when the wife believes that her baby is no longer her child; mistaking his wife’s reality for postpartum depression, the husband almost loses both his child and his wife in one horrifying event. But that is just the beginning. The primordial woods of Northern Europe appear in the center of the Big Apple, and transport the reader into a tale of twists, turns, and ultimately redemption and hope.

When we spoke on the phone about genre writing, the supernatural, and horror, LaValle was insightful, funny, and open to the mysteries of the world.

Christine Thomas Alderman: You received the Shirley Jackson Award and a PEN award. How do you straddle the world of what some call genre writing and literary?

Victor LaValle:  My first two books were more literary realism and enjoyed a degree of critical success and respect, but I wouldn’t say they made me terribly happy. Writing things straddling the path between realistic and horror/supernatural made me happier. But more to my surprise, I found a reading public who was much more interested in that blend, rather than straight realism. The danger to me is when you’re not making a choice.

CTA: In The Changeling, you clearly made a choice to leave behind straight realism. Your characters are always balancing on the edge of reality and the supernatural. How does your religious upbringing and your own ideas about spirituality play into your writing?

VL: My grandmother is from Uganda and is an African Episcopalian which is like triple Catholic as far as the amount of rules and rituals. She read the Bible every day and would never say she believes in ghosts (besides the Holy Ghost). She does believe there are devils, demons, and angels.

My mother (my grandmother’s daughter) was also deeply Episcopalian, deeply Christian, but she had a very dry, almost jaundiced view of God. She believes he’s there, but he doesn’t help people much. Her perspective added this highly skeptical layer to everything.

My mother and grandmother are Ugandan immigrants, and Uganda was colonized by the British who were brutal and then had two dictators who were equally, if not more, brutal. My mother didn’t live through that and then think she should just say “thanks be to God.” All that plays into my work. I’m not sure about what else there is in this world or this existence, but I’m going to ask a lot of questions. The universe needs to have good answers, not just “trust me.”

CTA: In addition to spiritualism, your work is obviously laced with horror, a term for which writers also have personal definitions. How would you define horror?

VL: For me the distinction that makes a thing horror is the unblinking gaze at the truths of what happens to human beings and the fact that there are rarely answers for what happens. In really good horror, you’re never left with the sense that all is solved and good won again. Good horror leaves you unsettled and changes your view of the world. You’re left pondering the long-term effects of what people endured.

CTA: The horror you use in The Changeling is very grounded in human characters. You write scenes in all your work where characters act with everyday cruelty toward others that can be as unsettling as your elements of the fantastic. What does it cost you as a writer to take a character to the razor’s edge of destruction?

VL: It’s a slow process. In early stages of writing, my characters are almost too good to be true. And I think that’s really just being kind to yourself, largely because you don’t want people to read your work and think this is you and this is how you treat other people. But that honesty of how people really act, especially when they are stressed and taken to the edge of what they can bear, is what rings true. That is the more frightening place to go, and I know that if it frightens me, it is probably honest.

CTA: In your work, you weave in other cultural elements like To Kill A Mockingbird, H.P. Lovecraft, fairy tale monsters, religion, and family, while still maintaining a solid storyline that doesn’t let the reader put the book down. There are so many ways to drop into your work. You pull in a disparate readership, but it doesn’t feel like you’re trying—it just flows organically. How did you seek to accomplish that? Was it intentional?

VL: I feel like getting to that place where the book flows and isn’t a Frankenstein monster is a process that takes time. One of the mistaken ideas I used to have when I read about other writers was that the book on the bookshelf I found was how that writer always was able to write. I would think, “Oh, this is a brilliant book,” and say to myself, “They’re brilliant and I’ll never be able to figure out how to do that kind of thing.” I want to say clearly how all of this is a learning process from one book to the next to the next.

If you look back on any writer’s career, you can see the way they were trying to learn how to do something, but they might not have been good enough to do it yet in the early books. But they kept going, and they started getting better.

As a writer, it’s helpful to see the journey so you don’t think great writers come out of nowhere. Some first books don’t compare to the second, third, or fourth novel. In fact, often the time when authors get recognition can be the later works. But those early books are still important because you can see the writer they are going to become.