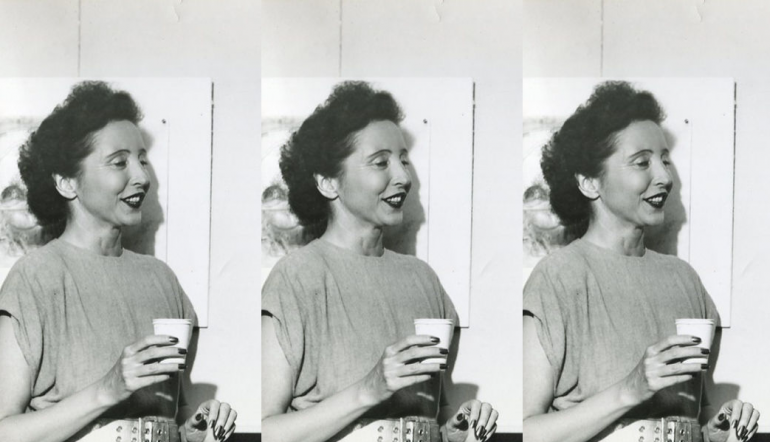 My adolescence was difficult. I was utterly confused, depressed, and lonely. I had braces and was so vain that I refused to wear the glasses I desperately needed. My parents didn’t understand me, my teachers didn’t understand me, and I still had to share a room with my little sister. It was really quite tragic. And then I discovered Anaïs Nin.
When I was seven my family hopped the state line, from Kansas City, Missouri to the Kansas side, so my father could attend graduate school. Our new area was very green and we had a creek in the back, and prior to my unhappy teenagehood I spent a lot of time riding my bike around, looking for rats in the creek (I had seen a pack of them once and kept trying to confirm the original sighting) or eating snacks in my tree house, which actually belonged to the family next door. My point is that our town, and hence our library, wasn’t fancy. Overall it was a library of effort–it was trying, and more importantly, it was humble, widely regarded as the most honorable trait of all by the Bread Basket of America.
Anaïs Nin, however, did not seem very humble and did not seem content to accept whatever life threw her way. Instead she was, well, Anaïs Nin, her name now synonymous with the unapologetic sexuality and intellectualism that characterized her works of fiction and her famous Diaries. She was worldly, beautiful, brilliant; what excited me most, she seemed wildly, unthinkably in charge of herself.

The first Nin book I checked out had a blue paper book jacket that alarmingly announced in bold black letterpress A SPY IN THE HOUSE OF LOVE. The book was an objet d’art, and several of her publications indeed included collages, photomontages (Val Telberg’s work enriches House of Incest) and drawings. At school I carried Nin around in my backpack like a talisman–as if the books could ward off all of the teenage ills that plagued me like acne of the soul. The titles alone gave me the sense of satisfaction many poems can’t achieve in their entirety–Under a Glass Bell, Seduction of the Minotaur, Children of the Albatross, Ladders to Fire–I read them all, and when there were no more books to check out, I devoured her Diaries, which I kept finding at garage sales, the 1970s set edited by Gunther Stuhlmann with the same photograph of Nin in the corner in a different bold color for each volume.

In the first volume of the Diaries Nin writes:

You live like this, sheltered, in a delicate world, and you believe you are living. Then you read a book…or you take a trip…and you discover that you are not living, that you are hibernating….Monotony, boredom, death. Millions live like this (or die like this) without knowing it. They work in offices. They drive a car. They picnic with their families. They raise children. And then some shock treatment takes place, a person, a book, a song, and it awakens them and saves them from death. Some never awaken. They are like the people who go to sleep in the snow and never awaken.

I did not want to be like the people who go to sleep in the snow and never awaken. Because most of them went to my high school or lived in my neighborhood. For awhile anything anyone said or did that I didn’t like resulted in the conclusion that they were hibernating. My little sister, innocently sitting on her bed in our shared bedroom, just tying her shoes or doing her homework, was hopelessly hibernating. My parents, with their jobs, were hibernating. But my understanding of this meant there was no place for me to go–ordinary life was death, and I couldn’t even drive yet.
Around this time I took a car trip to St. Louis with my mom and sister, and I anticipated our time on the road by checking out several audio cassettes of Nin reading from her Diaries. While my sister sat in the backseat and patiently endured three hours of Nin’s philosophizing on writing and womanhood, I sat up front eating candy and “living.” I still remember a moment when Nin says with conviction “I am Anaïs.” It was the first time I had heard her name pronounced aloud, and I felt deflated. I had been telling everyone about this great writer named “Uh-nigh-iss” Nin.
Certain themes that dominate Nin’s early Diaries continue to strike me as particularly resonant for the thinking young person–particularly Nin’s deep understanding of the need for radically defined autonomy, including the freedom to explore morality’s gray areas, question one’s values and the extent to which they’ve been socially shaped, and survey one’s sexuality (solo or otherwise). In a radio interview with Studs Terkel in 1972, Nin is her usual articulate, captivating self (and such a lovely, lulling voice) as Terkel astutely notes her appeal to young people in a time of great social upheaval. While Nin observes with audible disappointment that many artists shut down as they age, listening to her read from later Diaries makes it clear that Nin, by contrast, only grew stronger in vision and more artistically willing as time went on.
How these books ended up in a modest suburban library in the Midwest is still a little baffling. Even considering Nin’s considerable fame in the 1970s, the volumes my library held included several rare printings and early editions of her novels. I like to imagine a sneaky librarian in the 1950s and ’60s ordering the works on the sly and slipping them onto the shelves. Whatever brave soul purchased those books, I want to thank him or her for ushering me through a difficult time, and for bringing Anaïs to Kansas.
As much as I needed her then, I haven’t revisited the work of Nin, mostly because I still find nourishment from my memories of her work as opposed to the actuality of her work. And after all, it’s not so much her body of work I’m interested in but how I interpreted that work in a time of need. And what I remember from the black hole of adolescent yearning is a writer not interested strictly in sex (Little Birds must be the most lyrical, esoteric erotica ever written) but in the infinite nature of desire and how elusive fulfillment can be, sexual and otherwise, at any age.
Radio interview from Anais Nin Audio Files.
This is Bridget’s fifth post for Get Behind the Plough.