Home
»
Uncategorized
»
Anatomy Courses, and an Interview with Blake Butler 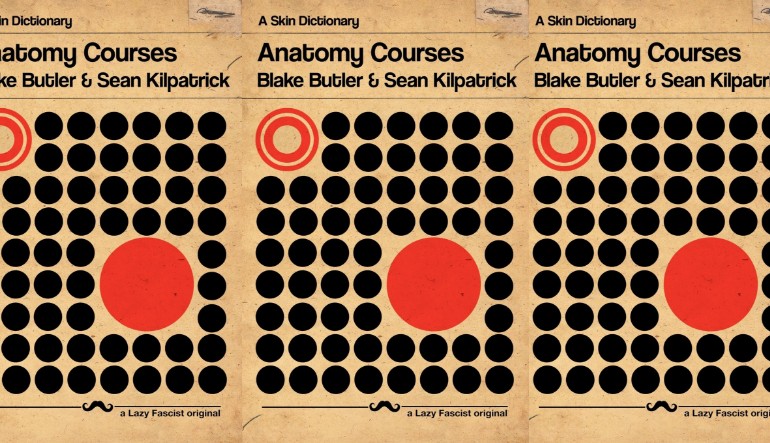 Anatomy Courses by Blake Butler and Sean Kilpatrick is twisted in the best possible sense: linguistically. Butler and Kilpatrick’s work of fiction consists of 62 short sections, mostly one or two pages long, that interlock and move toward a visceral, incantatory conclusion. Each section exhibits a kind of torque, a piling on of non sequitur and contradiction—, as in “Our pyramid had 17,000 sides, which made it not a pyramid.” Sentences prize sound but don’t always parse: “I honed my flap to expel enamel.” The work concerns itself with absence, with layers, with language and its connections to the body, while slipping through such aphoristic nuggets as “A pore is a hole also” and “I am tired of this voice and yet I speak.” Blake was recently kind enough to answer a series of questions via email, concerning Anatomy Courses and some of the territory it explores.

Brooks Sterritt: Aside from the collaborative nature of the project, was the process of composing Anatomy Courses different from how you normally work? Was a different kind of freedom present for you, as far as writing something you didn’t initially intend to publish?

Blake Butler: Yeah I don’t think Sean or I were working with any intent at all to even really show it to anyone at first, and even as we thought later we might we didn’t have much expectation of it sticking. That was a nice freedom even outside my usual approach of writing without fear of audience bending, in that it was almost like talking to myself, or talking to another leg of myself in another city and trying to chant with it. It made it immediately more fun and spasmodic and able to shift at any second, and that’s the best. The way we took turns writing one short page and sending to the other was also really freeing in that it allowed big jumps between the paragraphs each of us wrote alone. Like I could end with something going one way and when it came back Sean assuredly had deformed it into a wholly other sort of creature, and that kept happening again and again. Plus it’s almost like performing when you are writing ‘to’ someone: each day I was trying to deform Sean’s previous grafs while also staying true to the center of whatever deformity was trying to carry over from before, both on a syllable and syntax level, and on an image and affect level. It was almost like a cut-up method where instead of cutting paper you’ve cut brains and days.

BS: What interests you about serial killers? I ask only partially due to lines like “I drank a latte with David Berkowitz!” and “I had dinner with Ted Bundy seventeen times!”

BB: I think the reason I find them interesting at times and why they appear in this particular work are pretty different. It’s easy to find something compelling in radical action, if also obviously morally ill, like drilling holes in someone’s skull to zombify them—and yet that someone has done this, it’s hard not to think about those parts of you that want to do that, or feel like they want to do that. I think all people are capable of great horror, and yet most are able to maintain that urge either by being more fully guided by a want to not do those things to others, or something else. One of the things I find most interesting about these individuals, though, is the way they talk about it. They are often able to dilute these urges down to really clear, basic ideas, almost in the same way that athletes do after accomplishing big goals, as David Foster Wallace outlined so well in his essay on Tracy Austin. Like Richard Ramirez, after being caught and sentenced, said: “Big deal. Death comes with the territory. See you in Disneyland.” There’s something huge there, even delivered by someone who has done things I wouldn’t do, no matter how much I some days am filled with anger or whatever, like anybody. That encapsulation of hugeness into blankness, where the blankness actually can become more huge than the huge, was something I think Sean and I were messing with in the kinds of sentences we used in the book, at least at times: to go so far beyond logic and image, while using relatively simple and often base words, so quickly that by the time you’re on page three you’ve hit a different kind of terrain than what action or image is. I think that’s one of the best things about language: it accesses a space and a tone and a shape that no other form of media can. I like to read and write best in modes where the sentence or paragraph or page or whatever is working off of, um, something else…

BS: It’s funny how there seems to be a near-universal fascination with extreme violence, even (or especially) for those who are essentially non-violent themselves. What are your thoughts on art as a form of violence: to the space, to the page?

BB: It’s a good question, and I don’t really know the answer. Part of me would say that it’s because there’s an innate want in anyone to invoke horror, and someone like myself who doesn’t participate in actual violence almost never finds pleasure or release in invoking it within a void. Another part of me would say it’s self destructive in a theoretical sense, which the longer I spend alone in front of machine messing with language and space the more I find myself wanting to turn furiously. Like I want the hurt without the hurt, and enjoy approaching it in states of solitude. Another part would say it has to do with fear and want for something stronger, which in me makes me want to burst the seam of the whole thing and come out the other side. I actually just finished writing the most violent thing I’ve ever done, as a challenge to myself to go beyond the limit of it. It was the most fulfilling personal aesthetic experience I’ve had. I think most of me thinks something of a combination of all of the above, that the violence inhabits this wavering space between total blank and something inexplicable or godlike, like a silver surface afraid of itself. Honestly I find a lot of violence in books or films boring, in that they seem to want the act to do the work on its own, beyond the word. In the particular case of Anatomy Courses I know we intended to begin from a point where the violence was so highly seeded and hyper-syllabically centered that it’s almost like the violence was just the skin on the grosser body.

BS: Your answer brings a mercury surface to mind as well, for me. Would you mind talking a bit about the book’s subtitle “A Skin Dictionary?” I should say I love the concept, for the way it evokes a living reference work as well as one bound in skin.

BB: “A Skin Dictionary” was pulled from the list of 50-something titles that appear on the book’s back cover, which Sean and I took turns generating—a kind of catalog of possible titles from which the final title emerged. Though I also like the idea that the book could go by many names, kind of like a holy text, elevating the grotesqueries and craze-language in the image of something even more timelessly arcane. I think we intended this ream of horror to have a body beneath the surface of the sentences, and perhaps the Skin Dictionary concept is a stab at that, a kind of catalog of human hell where all the hell has already happened and lives in everyone. But really it’s just a term either or Sean or I (I can’t recall) spat out the way you spit out gristle off a nasty body, unless you swallow it, which many of us often do. I like books that scare you with the possibility they are actually alive, a location rather than a mythology.

BS: You often mention the machine, but there is also a language of transcendence present in a lot of your work (fiction and otherwise). Does writing ever approach anything like a spiritual act for you, or is it a purely mechanical process?

BB: I tend to think of writing how I think of math: it has corridors and lattices and approaches and symbols and large fat bodies trying to manipulate it outside itself. I feel the most spiritual, I think, when I am the most outside of my physical self, and consequently I usually find I am most interested in my own writing when it feels like I didn’t write it. I’d like to not even be there. I like to fall so back deep into the oncoming of it that the space between my computer’s screen and my face is zero. There’s nowhere else I’d rather be.