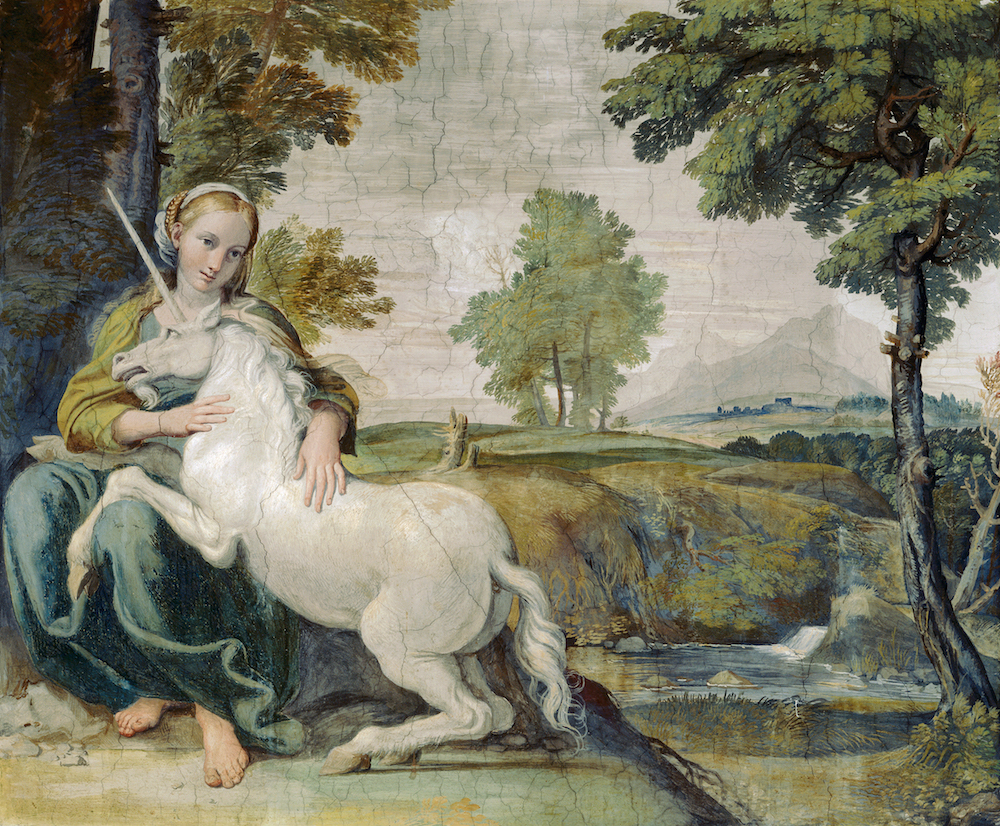 ca. 1602 — The Maiden and the Unicorn by Domenichino — Image by © Alinari Archives/CORBIS

“Q. What have unicorns and virgins got in common

A. They are both fabulous beasts.”

In the new collection of Angela Carter’s mostly forgotten, but viscerally affecting poetry, Carter perverts mythological symbols in order to subvert the mythology of femininity. Just as Simone De Beauvoir lamented that “one is not born, but becomes, a woman,” Carter’s poetry, particularly the eponymous “Unicorn,” deconstructs “woman” as a mythological figure in herself.

As the legend goes, “no hunter can catch a unicorn” with the exception of a virgin, as her purity inexorably draws the unicorn to her. The virgin is sent out into the woods alone, and the unicorn finds her and lays its head in her lap, with all of the vaguely Freudian subtext that entails. In this poem, Carter crafts an intentionally uncomfortable interpretation of this myth in order to unveil the discomfiting contradiction and hypocrisy inherent to the notion of the “virgin.”

First, the virgin is “arranged” among the “innocent and fragile leaves,” which are “dripping with last night’s rain.” She is not necessarily innocent or fragile in her own right, but is “arranged” to be so, while the image of the leaves “dripping with last night’s rain” creates a tension between a patent sexual connotation and the pure, restorative power of rain, which follows from the baptismal association with water. The juxtaposition of images of purity with equally potent images of “dirty” sexuality illustrates the fundamental paradox of the virgin: she is expected to be “clean,” while she is necessarily defined by sexual parameters.

This paradox becomes even more explicit in the next stanza, in which the speaker calls her “the only virgin to be had,” and then in the very same line begins the parenthetical: “Strip club agents cramped / in cabinet de voyeur massage their trembling buttocks.” This contradiction implies that the virgin is truly a “fabulous beast,” as the woman who is ensnaring the unicorn is, in reality, deeply sexualized. In order to call the “unicorn” to her, the virgin needs to be sexually desirable, but in the process of being desired, she loses her chastity. She just barely passes as a “virgin” because she is a sexual being without any sexuality of her own, never asking to be touched, but constantly groped by men who reduce her to an image as insubstantial as the “painted undressed ladies on their ties.”

There appears to be a shift in the power dynamic when the “virgin” is allowed to speak; she “love[s] the game, love[s] the chase,” she “knows and welcomes each advance.” She is not a guileless doe in the woods, but an agent, a player in the game. But even so, she is fully aware of the violence and domination that accompany this game that “turns into war,” especially when the unicorn “take[s] out [his] long knife.” The unicorn’s phallic instrument is preparing to “kill” the virgin, as she will cease to exist once she has lost her defining sexual chastity. And yet this is the entire point of the game which she claims to “love.”

The virgin justifies this love by contending that she is the subjugating force in this exchange; she insists, “You think you are possessing me— / But I’ve got my teeth in you.” She stealthily conceals her weapons underneath markers of femininity: “sharp teeth” inside her “dark red lips,” the claws underneath the lacquer of her red fingertips. The color red symbolizes sexual passion, while red lips and fingernails are stereotypically seductive physical attributes. She is deriving a sense of empowerment from her sexuality, from her ability to draw the unicorn to her.

But ultimately, this is a fallacious type of empowerment (if only because teeth and claws are no match for a knife). Her power is not the result of any kind of agency on her part; rather, she has some measure of influence over the unicorn’s decisions, while the unicorn has the freedom to make his own decisions. The final stanza extrapolates this somewhat despairing view to gender relations in society:

“They sharpen knives; whisper to her

‘You can put your knickers back on in a minute, dear.’”

This is the poem’s last word, and it doesn’t come from the virgin, or from the unicorn, or even from a man necessarily, but a nebulous “they,” meaning the men and women who perpetuate the patriarchy. Even if the virgin has power over the unicorn, she still does not have power over herself. “They” have the power to define her, to “arrange” her, to tell her when to put her knickers back on.