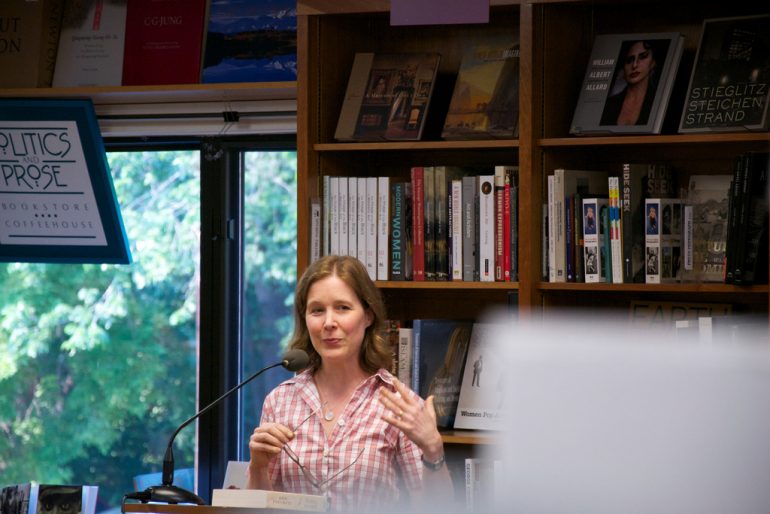 I am so into Ann Patchett right now. Is it hip to be into Ann Patchett? Is it edgy? No. It’s book-clubby. It’s suburban-mommy. My book club of suburban moms met last night and discussed Patchett’s Commonwealth. When we chose it, we laughed a little about what an obvious pick it was. Suburban moms are often brutally self-aware. Ann Patchett is, too.

When I recently recommended Commonwealth to a friend I used to work with at a bookstore back in our younger, edgier days, she replied, “I haven’t read it, but I gave it to my mom for Christmas.” There you have it. It was my own mom who introduced me to Patchett with a copy of Bel Canto. All of her librarian friends had loved it. It had a book club discussion guide at the end. I rolled my eyes for months before I bothered to read it, only to find that I loved it, too. I was awestruck by the floating, omniscient narrative which would change mid-sentence and still remain fluid and easy to follow.

I read Bel Canto when I was in an MFA program. I mentioned how inspired I’d been by the book to some friends who were also in the program. They regarded me tolerantly, and the only one who’d read it said it was very technically proficient, but a little, well, sentimental. Ouch. Had my feelings while reading the book somehow been cheap? I decided it didn’t matter. I revised a short story that hadn’t been working, including a viewpoint that switched frequently between two characters—sometimes from one paragraph to the next—which was all the fluidity I could manage. I felt immediately how right that viewpoint was for the story and sent it out. It was the first time I got paid for writing fiction. Ann Patchett taught me how to write that story.

Patchett does not suffer from any shortage of credentials or accolades. She attended the Iowa Writers’ Workshop and won a fellowship at the Fine Arts Work Center in Provincetown, MA. She won the 2002 Orange Prize (now the Baileys Women’s Prize for Fiction) for Bel Canto, and she hasn’t let up since. Some of her books are better received than others, but Commonwealth was generally glowingly reviewed, so I’m a bit puzzled by the scorn I sometimes detect towards her work.

Does she seem too well-adjusted and approachable? Should her books be harder to read if indeed they have something profound to say? Should she not love dogs, be happily married to a doctor, and own a bookstore? I think back to my own bookstore days, when we booksellers were wary of any work that topped bestseller lists and flew off the shelves. We didn’t trust mainstream success.

Patchett makes what’s hard look easy. Her best novels are easy to read and difficult to put down. That might sound backhanded, but I mean it purely as a compliment. Still, her work can be deceptive. In Commonwealth, she handles time with a deftness I’ve rarely seen, spanning fifty years in an utterly reasonable 300 pages or so. She drops in on characters at moments that are important to the story, sparing the reader the irrelevant parts, which is not to say she neglects details or scene-setting. Time is not linear, and if it follows a pattern, I can’t discern it, but with each jump she grounds the reader. For me, reading it was like watching a master juggler. I didn’t want to think too much about how she was managing the trick, but after I’d finished it, I couldn’t wait to watch frame-by-frame.

The first chapter is set in the 1960s at a christening party. Two characters begin the affair that sets the story in motion. The next chapter jumps ahead fifty years, and on page 41 we learn: “Franny had talked about Albie too much in her life, and now, as if she could make up for it, she made a point of not talking about him at all.” It’s not until page 179 that we understand what the talking was, and that it amounts to a tremendous betrayal. Patchett is sly in how she releases information, distracting readers with other characters and stories she has up in the air. But I never felt manipulated. The jumps in time feel intentional and inevitable. Commonwealth is a pleasure to read and provides a lesson for any novelist.

As if Patchett hadn’t already done enough for me, she published a long essay in 2011 called “The Getaway Car: A Practical Memoir About Writing and Life.” I return to it whenever I’m struggling with my novel (let’s say once a month or so, but some months every day). She describes writing her first novel:

Novel writing, I soon discovered, is like channel swimming: a slow and steady stroke over a long distance in a cold, dark sea. If I thought too much about how far I’d come or the distance I still had to cover, I’d sink. As it turns out, I have had this same crisis with every novel I have written since. I am sure my idea is horrible, and that a new idea is my only hope. But what I’ve realized over the years is that every new idea eventually becomes the old idea. I made a pledge that I wouldn’t start the sexy new novel I imagined until I had finished the tired old warhorse I was dragging myself through at present. Keeping that pledge has always served me well.

I find it comforting that the hard things Patchett makes look easy might not actually be all that simple for her. She offers sensible, unglamorous advice—my favorite kind.