Home
»
Book Reviews
»
Around the World in 209 Teams: A Review of Thirty-One Nil by James Montague 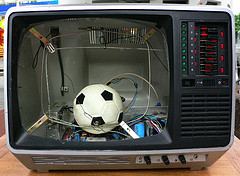 The work-ditching phenomena that our globe experienced throughout June and July, known as the World Cup, is really just the polished and gawked-at tip of the World Cup iceberg. Beneath the surface, there is the much larger and much less-attended ordeal of World Cup Qualification, a process that takes about three years and involves all of the 209 national countries who are members of the Fédération Internationale de Football Association (that would be just about every country in the world, except for Greenland and Tibet). Only when the 209 teams have been whittled down to an elite group of 32 does the World Cup Final begin, inspiring so many outsized profits in bars in every time zone.

In Thirty-One Nil, British journalist James Montague covered the World Cup Qualification. Not comprehensively, of course–to attend all or even half or even a quarter of the games would be a humanly impossible task–but Thirty-One Nil is such an ambitious project that it tends to feel like Montague has indeed seen it all. By Montague’s count he went to 20 different countries during his reportage, situated on all of the inhabited continents. It’s one thing to absorb, as stated fact, that soccer/football has firm control of the title of the world’s most popular sport. It’s another thing entirely to feel the chapter-by-chapter journeys that Montague undertakes, from Haiti to Iceland to Jordan to Samoa to Rwanda to good ol’ Tampa Bay, Florida (and this is hardly half of his total destinations). The lesson becomes clear: this stuff matters to a whole lot of people.

A pattern becomes clear, too, as Montague travels from team to team, interviewing as many English-speaking coaches and players as he can in the days leading up to each qualification match. There is political unrest, or natural disaster, or economic depression that leans heavy on the small country. (If the country in question has had enough people emigrate away, the leagues in Europe are scoured for players who had a mother, uncle, grandfather born in the country in question — and that player is promptly whisked back to play for the land of their ancestors, a land they may have never stepped foot on previously.) The coaches and players persist through blistering temperatures, rioting fans, circuitous and uncomfortable travel to play their best for their team, knowing that victory really would bring joy and unity, even for a moment, to their communities in a way that even a good-natured draw could never do. The ninety minutes of the game itself almost feels incidental, a footnote compared to the obstacles that were overcome simply to get those eleven men on that field at that point in time.

The beginning of Thirty-One Nil focuses on the, for lack of a kinder word, curiosities of World Cup Qualification. Montague goes to American Samoa, where he meets some of the players who ended up on the wrong end of the infamous 31-0 game–suffered in 2001 at the hands of Australia. And Montague is among the scattered dozens who saw, in person, American Samoa’s first-ever Qualification win, over Tonga. As time goes on, these types of quaint moments are replaced by cameos from the world’s elite players on the teams of Croatia, Switzerland, Uruguay. No, really, as time goes on: in Qualification for the 2014 World Cup, a country like American Samoa is liable to be eliminated before 2012 is through, and Montague reported through the end of 2013, by which time the cream had already risen to the top.

There is lots of violence in Thirty-One Nil. At times, team buses are put under siege when they carry a visiting team in a foreign land. Plenty of games that Montague has access to as a member of the media are shut out to paying customers entirely, for fear of fan violence. Montague himself is temporarily blinded by tear gas in Brazil, when a peaceful protest against excessive government spending on the World Cup goes awry. Brazil’s story has no uplifting coda, either: after Thirty-One Nil was published, the Brazilian team advanced to the semifinals of the World Cup Final before they were thrashed by eventual champions Germany, 7-1.

On one level it’s something like crazy for the fans in the more volatile situations that Montague encounters to be so willing to be thrown into a rage by the fates of an eleven-man team that they played no part in selecting or training. Or to think that a victory by these same eleven men against another group of eleven men would validate something about a collective national identity. If it’s your persuasion, it’s easy to get pessimistic reading Montague’s book, after reading about yet another country split in two, with fandom for rival soccer teams used as a reason to escalate tensions.

If it’s your persuasion, it’s also easy to get quite optimistic reading Thirty-One Nil, because in every last one of these places, a group of eleven men and a coach still find a way to form a team to play a game that is based on passing, individual and collective creativity, even beauty. You might like it, you might not, but this is our World.