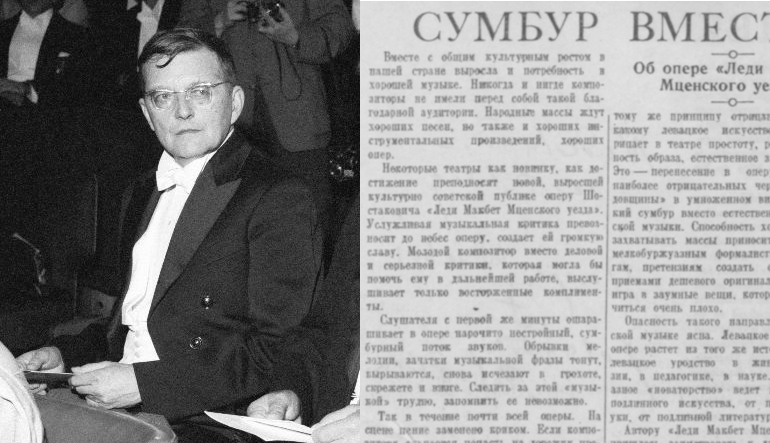 In The Noise of Time, Julian Barnes examines the relationship between art and power, or, more specifically, between individual creativity and a controlling state. The novella is a fictionalized biography of the Russian composer Dmitri Shostakovich, covering his personal and professional life under Stalinist rule. It is structured around the composer’s three “conversations with power”—episodes that bring him and his art into contact with the state apparatus. Through these “conversations,” Barnes’ novel asks how and whether art can survive under such conditions.

The first of the novella’s “conversations” centers on the nights following a damning review of Shostakovich’s opera Lady Macbeth of Mtsensk in Pravda, the official newspaper of the Communist Party. The composer spends these nights fully dressed and clutching a packed suitcase, waiting on the landing of his apartment building in expectation of arrest. As Barnes writes, “They always came for you in the middle of the night.” It was May 1937, during the height of what became known as “the Great Terror,” during which many of the composer’s friends and relatives were imprisoned or killed as enemies of the state.

Barnes captures the perpetual uncertainty and fear evoked by this environment in disjointed passages that follow Shostakovich’s overactive thoughts as he waits by the lift: “He tried to keep his mind on Nita but his mind disobeyed. It was like a bluebottle, noisy and promiscuous.” He flits from moments of mundanity or amusement to alarming thoughts of old friends suddenly and unexpectedly taken to the “big house,” never to return.

These leaps through memory, punctuated occasionally by the heart-stopping whirrings of the lift, not only reflect the inner workings of Shostakovich’s conscious experience, but also allude to his compositional aesthetic. Shostakovich was attuned to the sounds of daily life as well as of music, both classical and popular:

The cacophony of sounds in his head. His father’s voice, the waltzes and polkas he had played while courting Nita, four blasts of a factory siren in F sharp, dogs outbarking an insecure bassoonist, a riot of percussion and brass beneath a steel lined government box.

The sounds Barnes describes here are pulled from various periods within Shostakovich’s biography: from his childhood, his early relationships, his own compositions, and two ill-fated performances of his works—one made ridiculous, as it set dogs barking, and the other made dangerous by the disapproval of Stalin. The coalescence of these disparate sounds infuses Barnes’ text with some of the fundamental elements of Shostakovich’s music—specifically those which got him into such trouble with the authorities. Barnes, returning to the present, writes: “Now, his music had set bigger dogs barking. History was repeating itself: the first time as farce, the second time as tragedy.”

Lady Macbeth of Mtsensk invited controversy for its explicit sexual overtones and its formal experimentation. In relaying this, Barnes quotes extensively from the Pravda article, “Muddle Instead of Music,” which described the production with words like “sordid,” “vulgar,” “convulsive,” and “spasmodic.” He also highlights the implicit danger in this negative review for Shostakovich’s career, and indeed for his very life:

As this passage shows, a negative review in Pravda was much more than an artistic critique. It was at best a warning, and, at worst, a credible threat. Shostakovich’s response—his nights on the landing—reveals his understanding of this review’s implications and set us up to understand his later “conversations with power” from a sympathetic perspective.

The second “conversation” centers on a diplomatic trip to America in 1949, where, as part of a group of cultural delegates from the Soviet Union, Shostakovich reads a pre-prepared statement publicly agreeing with the Party line. This included condemning his own earlier work and the work of one of his heroes, Igor Stravinsky. In Barnes’ novelization of this event, there is a strong disconnection between Shostakovich’s inner thoughts and feelings and his public speech:

He read the Friday speech in a fast, uninflected gabble, reinforcing the fact that he was quite unfamiliar with the text. He carried straight on over punctuation marks as if they did not exist, pausing neither for effect nor reaction. This has absolutely nothing to do with me, his manner insisted.

This interpretation of Shostakovich’s manner reveals a quiet rebelliousness underlying his outward actions: he may read the speech, but his tone will not endorse it.

Barnes draws parallels between this speech and Shostakovich’s post-Pravda approach to composition. No longer able to produce works like Lady Macbeth, Shostakovich’s post-Pravda works have been criticized for their populism and conservatism. But while they are not overtly challenging, Barnes follows a group of critics who discern something quietly subversive at their core. As Barnes writes, “When truth speaking became impossible—because it led to immediate death—it had to be disguised. […] And so, truth’s disguise was irony. Because the tyrant’s ear is rarely tuned to hear it.” Shostakovich is thought to have exploited the abstractions of music in order to introduce irony and mockery into his supposedly glorifying works. Barnes describes Shostakovich’s triumph at the hidden meaning in his Fifth Symphony, perhaps one of his greatest works:

The phrase also permitted those with asses’ ears to hear what they wanted to hear. They missed the screeching irony of the second movement, that mockery of triumph. They heard only triumph itself, some loyal endorsement of Soviet music. Soviet musicology, of life under the sun of Stalin’s constitution.

Cloaked in irony, music can be a tool of dissent that can safely challenge power, “a secret language which allowed you to smuggle things past the wrong ears.”

Despite the sense of hope behind this duplicity, the final “conversation” carries a note of resignation and weariness. It involves an older Shostakovich, sitting in the back of a chauffeur-driven car, ruminating on his life. Strong-armed into becoming a member of the Party and the Chairman of the Russian Federation Union of Composers, he falls deeper into shame and regret just when, to all outward appearances, his successes seem so assured. In the battle between art and power, it appears that any triumph in these minor subversions is short-lived. This older Shostakovich muses:

A farm boy throws an apple-core at a passing, chauffeur-driven car. A drunken beggar pulls down his trousers and bares his bottom to respectable folk. A distinguished Soviet composer inserts subtle mockery into a symphony or a string quartet. Was there a difference, either in motive, or in effect?

The futility of these gestures, which effect no obvious or meaningful change beyond a brief moment of triumph-in-defiance, is sorely felt, yet it is not the final word on the relationship between art (music) and power in the novella.

This pessimism is tempered by the moments wherein the greatness and purity of music are celebrated:

So what is music, or any art, in relation to power? A battleground for competing ideologies or a pure and timeless form that outlives its formative conditions?

The answer to this can perhaps be found in the framing narrative. This narrative, separate from the chronology of the main story, describes a train journey undertaken by Shostakovich during the Second World War. While waiting on the platform, his carriage is approached by a war veteran and double amputee who is now a beggar. Shostakovich, an unnamed companion, and the beggar share a couple of glasses of vodka. This moment of friendliness, relaxation, and enjoyment amidst the outbreak of war, and of typhoid, cuts through the horrors of personal experience to something more profound. It is captured in the ringing out of the three vodka glasses, each filled to different levels. The sound of their toast: a perfect triad:

…a triad put together by three not very clean vodka glasses and their contents was a sound that rang clear the noise of time, and would outlive everyone and everything. And perhaps, finally, this was all that mattered.

Music is represented in Barnes’ novella as a means of propaganda and control, a means of subverting that propaganda, and as a pure art form, free from the petty politics of history. It is this final sense, of music as freedom, joy, and contentment, that the book ultimately celebrates.