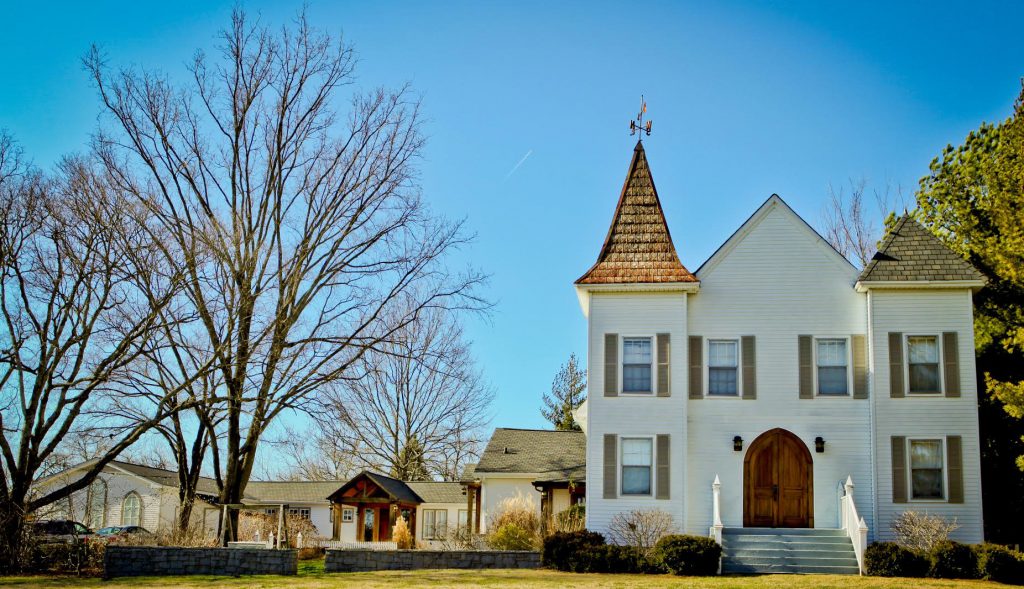 This is the fourth post in a Ploughshares series where Charlotte Donlon interviews people who promote and support writing and creativity. The other posts in this series can be found here.

For 25 years people have been galvanized to go to the Art House in Nashville because it’s a beautiful, storied, iconic place with a history of good things happening on the property. As Art House has spread to other locations, the enthusiasm for gathering around common loves and concerns in a great setting continues to draw people.

Art House America, a 501(c)3 was founded in 1991 by Andi Ashworth and her husband Charlie Peacock when they bought and renovated a century-old country church near Nashville. They began hosting speakers and events for the community almost immediately after purchase, gathering in that wonderful space around important ideas. Later they built Peacock’s recording studio on the property and moved their family into the church, making it their home. Hospitality was at the center of their for-profit work, non-profit work, and family life. In those early years, Ashworth and Peacock never thought about Art House as an organization expanding to other places. But Art House America now includes the original location in Nashville, as well as locations in Dallas and St. Paul.

Nashville has hosted some incredible gatherings. In 2002, Bono sat at their fireplace and spoke to a living room full of Nashville artists about the AIDS and famine emergency in Africa. Art House has held artist retreats and events with speakers such as Steve Turner, Steve Garber, Patricia Heaton, David Dark, Mark and Jan Foreman, and performances by Ruby Amanfu, Amy Grant, Mat Kearney, Brooke Waggoner, Matthew Perryman Jones, Joy Williams, and Sara Groves. They have also hosted community conversations on topics such as Transcendence in Film, Cultivating the Mind of an Artist, The Works of Flannery O’Connor, as well as Dr. Richard Winter speaking from his book, Still Bored in a Culture of Entertainment. Most recently they gathered to hear David and Phaedra Taylor talk about “Art for the Common Good: What Does it Mean.”

But there’s also a quieter, more private side to their work, which best fits under artist care and nurture: providing free, anonymous spiritual and vocational counsel, and walking with artists through illness, difficult relational passages, and career ups and downs. These kinds of things are harder to describe because they are more private interactions that have occurred organically as a result of relationships that have developed through Art House.

All of this together—events for the community and the one-on-one care of individuals—is what every branch of Art House is committed to. Art House America promotes creativity for the common good and nurtures people looking to explore an artful, faithful life.

Nathan Tasker was introduced to Art House in 1999 when he traveled to Nashville for the first time. In 2005 he and his wife Cassie flew to Nashville for Nathan to record a new record with Peacock. They spent three months tracking that album and experiencing Art House hospitality. Eleven years later the Taskers moved their family to Art House Nashville to serve as the new hosts and directors. Ashworth and Peacock had recently moved out of the Art House and happily endorsed the Taskers in their new role.  Under the Taskers’ leadership Art House Nashville continues to operate with the same vision that Ashworth and Peacock established in 1991. They now serve as Directors Emeritus and have been amazed to watch this new phase unfold while entering a different season of life—one where Ashworth is now able to write a book about their years in the Art House while continuing her work with the Art House America literary blog as Editor in Chief.

Tasker says Art House inspires him and his creative endeavors. He says, “I am very fortunate to live in a beautiful house that also has a world-class recording studio attached to it. It allows me a space to create, write, and record, that I previously experienced on a much smaller scale. And the house has a creative rhythm to it of it’s own – every space seems to offer an opportunity to read, reflect, or make something.”

Art House will host four major evening events in Nashville in the coming year. They also want to continue to nurture individual artists, partner with other groups that have a similar vision, and provide refuge for those who need a place to think, create and be encouraged in their vocation.

Delcambre’s hopes for the future include dreaming up how to best utilize their new space. In June, they purchased a building in a historical and desired area of Dallas known as Lakewood. They are also launching two new programs. “The Art of Business” is a six-week class that will educate artists on the business side of their art. “Deploy” will send artists into schools, hospitals, and community centers to share their gifts with people and audiences that may not have much exposure to the arts or may not have had opportunities to explore how to use their own gifts for the common good.

Delcambre also expects their writing program, “Awaken Creativity” to continue to flourish. It’s one of their fastest growing and most dynamic offerings. Their monthly groups provide a sense of community for writers through collaborative writing projects, quarterly meet-ups, public readings, and other events. Their first writers workshop will launch this fall featuring Andi Ashworth and Allison Fallon. Delcambre says, “Art House Dallas desires to be a vessel and safe space for the writing community to come out of isolation and into spaces where they can connect with each other, develop friendships, expand their knowledge about who they are and how they were made to create, and give back to and serve their neighborhoods and their cities.”

Ashworth shares her hopes for the Art House America organization as a whole. She says, “I want Art House to continue to be its unique self, doing its quiet work and its public work, keeping in mind the history it’s building on while continuing to grow in reflection of the needs and personalities of each city and each group of leaders.” Art House America leadership isn’t concerned about whether the organization is large or small. Their primary desire is for their work to be be deep and meaningful. Their idea of success is grounded in fostering rich community, providing quality experiences, and increasing the fruitfulness of Art House participants’ lives.