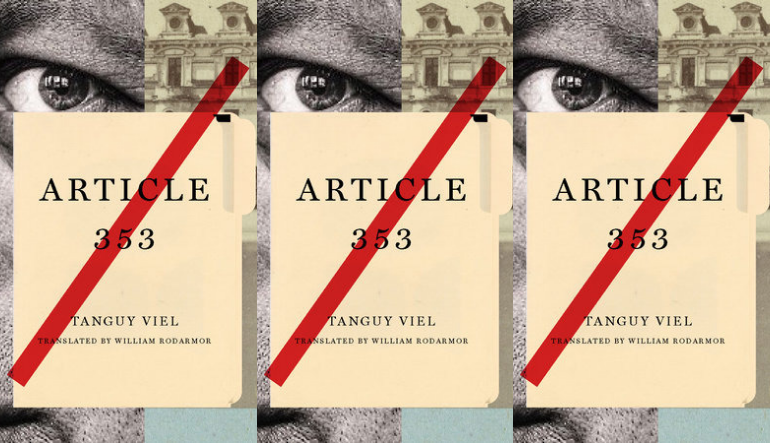 Antoine Lazenec has a look of striking ordinariness. He wears pointy shoes and drives a Porsche. Upon his arrival in a forlorn French town off the coast of Brittany, the enigmatic estate builder invites a local resident, Martial Kermeur, to invest in his project. Lazenec wants to tear down the dilapidated chateau, whose lawns Kermeur tends, and transform the sluggish property into a seaside resort. After some consideration, Kermeur, who has been laid off as a shipwright, invests his entire severance money—400,000 francs—while dreaming to live in a brand-new apartment with a view of the harbor. Lazenec is so influential that though he keeps dodging and delaying and does not build the house, Kermeur is not hopeless. It is only when the mayor of the town, Martial Le Goff, who has also invested huge sums of public money into the project, dies by suicide, that Kermeur realizes he has been duped.

A short while after attending the mayor’s funeral, Lazenec invites Kermeur to go fishing on his boat, Merry Fisher. Kermeur throws him off the stern.

On the witness stand, Kermeur is oddly calm and unperturbed. He narrates the details of the crime he committed as though it were routine, an act done magnanimously. While defending himself, though one expects the febrile protests heard in the monologues of Dostoevsky and Camus, Kermeur is dry and funny, with a touch of irreverence—more like what comes across in John Banville’s The Book of Evidence—and his tone is modulated to the low pitch of comedy. Kermeur’s nonchalance does not disturb. Consider the following:

I felt like telling it that I’m a seagull too, I glide above the water, aware that I don’t have much flesh left, so I fly over the sea and the boats in the harbor, and I’m a seagull now, a seagull in the fog hanging over the port. I can make out the city starting to appear, but it seems written in a language I don’t understand, an alphabet made of renovated buildings and open windows, and it’s only on the ledges that I can see the crumbs that are left.

The passage appears at the beginning of the book. By giving the seagull the freedom to think in its own distinct point of view, Viel sets the stage to mock the limits of human rationality and language. Once the vantage has been altered and the limits are challenged, the imagination of the birds and the murder of humans become equally meaningless or equally grave subjects of enquiry, placed next to each other in the absurdist narrative.

The entire novel is in the form of a monologue, and the narrator-protagonist addresses a courthouse presided over by a patient judge and the reader alternately. While the reader, who acts as the judge, and the judge, who acts as the reader, are directly implicated, Viel is not one to give things away hastily. His craft lies in the deliberate delay. The fact that Merry Fisher was a purchase made with Kermeur’s own money makes one such moment painful and ironic. Viel builds Kermeur’s backstory slowly, revealing the colors of his corrosive relationship with Lazenec.

While it could be argued that Kermeur’s final act is catalyzed by the suicide of the mayor who gave him employment when he was laid off, the roots of his rage are deeper. He is a replication of the charming existentialist hero who must act to salvage himself from the marshes of meaninglessness and put a definitive end to his strife. That is why in the brief period in which Lazenec illuminates the town with hope, Kermeur sees him as the dazzling force that will pull him out of the grey morass of poverty and crumbling relationships—Kermeur’s wife, France, leaves him after he loses a lottery; his teen-aged boy then becomes intransigent and boorish—relieving him from his ennui and anguish. Lazenec is “the archangel” who has descended “from the big-city heaven to deck” Kermeur’s dusty consciousness, or even “God Almighty” accompanied by an army of executive-looking guys dressed in flannel suits and neckties whom He will deploy to create the new order.

As such, Kermeur’s crime makes him not an impetuous jerk, but a Nietzschean. That is the bigger point the novel is making, or trying to make. It is not about poetic justice, but artifice. Viel disguises the worldly feeling of revenge that, in the wake of Lazenec’s threatening influence, intensifies Kermeur’s sense of insecurity and homelessness so radically that he cannot take it anymore. Throwing Lazenec into the depths of the sea is an act of metaphysical rebellion reminiscent of the parable of the murder of God described by Nietzsche in The Gay Science. If we replace “God” with Lazenec and “we” with “Kermeur,” the passage progresses with a deepening undertone of parody:

‘Whither is Lazenec,’ Kermeur cried. ‘I shall tell you. I have killed him… I am his murderer…Is there any up or down left? Am I not straying through an infinite nothing? Do I feel the breath of empty space? Has it not become colder? Is not night and more night coming on all the while?’

By the time we reach the end, Viel has prepared the judge, thoroughly exposed to Kermeur’s predicament and Lazenec’s conniving nature, to side with the criminal. Viel’s power, thus, is in inverting the rationale of law, and in taunting those who are complicit in its finality. Article 353 is a subtle interrogation of the ways justice is conceived of and delivered. For Kermeur, after all, more than the rigors of the method, it is a matter of capricious fortune.