Home
»
Interviews
»
At Some Point The Writer Should Be Having Fun: An Interview With Arthur Bradford 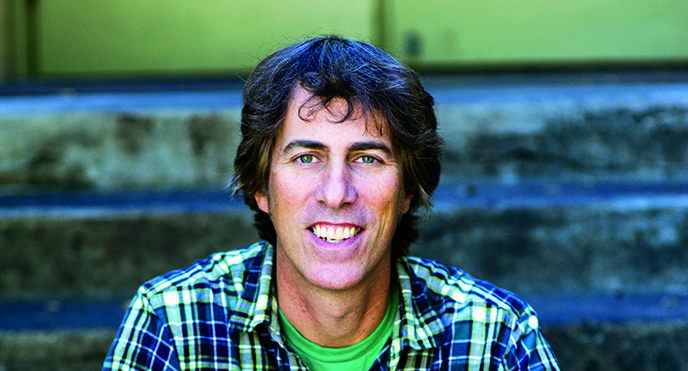 An incomplete list of the animals that appear in Arthur Bradford’s latest collection Turtleface and Beyond include a dead cat, a porcupine that menaces a recluse’s outhouse, a dog liberated from the pound, and the eponymous turtle, of face fame. Besides Turtleface, which came out in February, Bradford is the author of the very funny short story collection, Dogwalker. We emailed recently about Denis Johnson, loser lit, and keeping it reigned in.

I’m sure you get this one a lot, but I see some Denis Johnson in this collection. The main character being named Georgie of course recalls Jesus’ Son, as does the story “Orderly” about, well, an orderly.

But I’m thinking more of the deadpan quality of this exchange from “Emergency”:

That’s pretty perfect&mdashed;some of the best dialogue in fiction writing, I think. The dialogue in Turtleface and Beyond has a similar feel. In interviews you’ve described Johnson as a hero of yours. Could you talk a little bit about how his writing has contributed to shaping your own?

Yes, Denis Johnson has been a big influence on me. When I first read Jesus’ Son, back in the 90’s when it came out, I had that same feeling I sometimes experience upon hearing a new song or seeing new film that touches on the current culture in a fresh and exciting way. It was so original and cool. It made me want to to try to do something like that myself. I admire the simplicity, humor, and grace of those stories. Later on, while I was an MFA student at University of Texas, Denis Johnson showed up to teach a fiction workshop. It was a total coincidence. I would’ve traveled anywhere for the opportunity to take a class with him, and here he was becoming a writer in residence at the school I was already at. He is a very inspiring and generous person. He didn’t seem to put much stock in the notion that writing can be taught, which is a funny position for a writing teacher to take, but I understood what he meant. Denis drove around Austin in this giant red Cadillac convertible that he tried to sell to me when the term ended. He said he though I could pull off owning a car like that. I wasn’t so sure, but I liked that he thought I could. Or maybe that was just a line he used to try to unload it. I didn’t buy that car, though sometimes I wish I did. Denis helped me get a job working on the film adaptation of Jesus’ Son. If you watch the credit roll my name is the last one to go by.

My introduction to your work was reading “Mollusks” in a writing class as an undergrad. I’ve since taught that story to writing students. Students always love it, and I think it’s got something to do with—other than the humor and casual swearing—the fact that it seems “doable” or “effortless” in a way that a story like The Dead, or The Lady with the Dog, or whatever else writing students are usually taught, do not. How much work actually goes into achieving this naturalness, this feeling of “your weirdest friend telling you a story”?

I like hearing that’s the feeling one gets from that story. That was how I felt about the stories in Jesus’ Son when I first read them, also stories like “A&P” by John Updike or “Good Country People” by Flannery O’Connor. I think it takes a lot of work in that one probably needs to write a lot to be able to get the words on the page quickly and without overthinking things. That old saying about writing every day is pretty true. I’m not as good about it now, but when I was starting out I made sure to type out a few pages of something every single day. I use a manual typewriter, which I think is the best writing tool. Computers are distracting in a number of ways and lend themselves to endlessly rewriting sentences in an unhelpful way. Keep moving forward! Don’t think too hard about what you’re writing. Sitting down to write is hard and often painful, but at some point the writer should be having fun, otherwise it’s too much to expect the reader to enjoy the end result.

I liked all the stories in the collection, but my favorite might be “Cold Feet.” It’s the rare story that has both an elaborate outhouse/porcupine prank and an extremely moving ending. What was the seed of this story?

Well, your comments are saying all the things I want to hear. “Cold Feet” is one of the most recent stories in the collection. I wrote a much shorter and different version of it for this live performance show called “Seed” (interesting that you used that word in your question) in Portland where writers write a story about a musician’s song and the musician, in turn, writes a song about one of the writer’s stories. Matt Sheehy, of the band Lost Lander, was my partner and he has this song “Cold Feet” which I liked a lot. The story in the book doesn’t have that much too do with the song except that I believe there’s references to television and the double meaning of the term “cold feet”. The scenario, with the hippies and the outhouse and the porcupine, is a world I lived in for a couple of years up in Vermont. I like when I get a writing assignment such as that “Seed” show. Sometimes just sitting down to write a story is too daunting a task and it helps to have some rules set out. After the show I looked the story over and expanded it for the book. I made it three or four times longer than it was for the show.

The stories in Turtleface are very funny, but controlled. They never veer off too far into zaniness (even when a character, for example, falls down a mountain and hits his face on a turtle). How do you find that line? Is it something that comes to you naturally or is there an active “reining it in” that goes on in the revision stage?

I like odd and outrageous situations, but I want them to be believable too.  My first book, “Dogwalker”, had talking animals and surreal hybrids that most people wouldn’t believe actually exist.  I wanted this book to be rooted in the real world, but I wanted it to take place in the weirder parts of it.  I can usually tell when a story is going off the rails, but yeah sometimes I reign it in during the revision stage. It’s important not to try to be weird just for the sake of being weird. There has to be some kind of point to it, a reason within the plot.

Both of your collections seem to center on losers or outsiders. What draws you to this type of character?

People who have everything together aren’t that interesting are they?  A lot of us spend our time avoiding conflicts and uncomfortable situations.  Wealthy, successful people generally use their money to isolate themselves from the difficulties of life. This, frankly, makes them less interesting to me as short story fodder. But I’m trying to be less narrow minded about this. My mother will often point out that I had a perfectly nice upbringing and associate with many upstanding citizens in real life so my fiction should reflect that as well. A lot of my fascination with outsiders comes from the books I like to read. But I love The Great Gatsby and The Sun Also Rises too. My next book won’t be so exclusively centered on losers.

Who are your favorite writers, funny or otherwise?

I hold a special level of admiration for writers who succeed in both children’s and adult literature. E. B. White, Roald Dahl, Rudyard Kipling, Willa Cather, Mark Twain. I’m a huge fan of Charles Portis. The Dog of the South is, I think, the funniest book I’ve read. I love True Grit as well. I love Flannery O’Connor and Katherine Dunn. Perhaps my favorite book of all is The Long Ships by Frans Bengtsson (translated by Michael Meyer).  It’s a tour de force and I love everything about it. Two recently written books I’ve enjoyed a lot are The First Bad Man by Miranda July, and Everything Ravaged, Everything Burned by Wells Tower.