Home
»
Critical Essays
»
At the Seashore With Rachel Carson 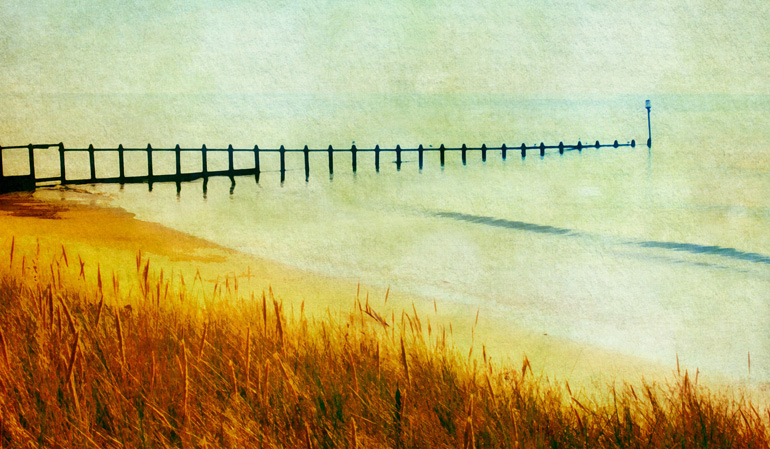 Atlanta was well into its first week of summer and its second week of gray skies and drizzly rain. Unable to escape to a sunnier spot for months, and work and family issues fighting for attention, I found my escape in Rachel Carson’s Under the Sea-Wind, her lovely meditation on sea life. I tagged along with Carson as she illustrated the lives of three creatures dependent on the sea (including my favorite, Scomber, the feisty little mackerel in Part Two) and drew beautiful pictures of the marine landscape above and below the water line. Of course I could have just browsed the internet until I found a webcam of someplace like Hawaii or Santorini, but then I would not have found so much comfort in the lyrical use of language that colors every page of this book.

Widely considered to be one of the first, if not the first environmentalist, Carson is best known for her 1962 book Silent Spring that warns of the dire effects of pesticides on fragile ecosystems, particularly DDT, which was hailed as a scientific miracle at the time. Silent Spring, along with her other award-winning naturalist writings, created a sensation, drew the ire of major chemical companies, and ultimately led to the formation of the Environmental Protection Agency. Under the Sea-Wind is her first work published in 1951 to good reviews but modest sales. It was later reissued after Carson became better known and a bestseller. Under the Sea-Wind takes readers to the ocean and illustrates through the power of words and a few elegant line drawings a fascinating and complex world most of us never stop to consider. In addition to being a marine biologist who wrote pamphlets and supervised a team of writers at the US Department of Fisheries, she was also a gifted writer clearly in love with the sea. Reading this early work is like setting off on an early morning beach hike with an expert guide who knows all the secrets of the sea and is delighted to share her visions.

In Silent Spring, Carson fears for the environment, but her early works are just as powerful in their own way—introducing readers to so much more than meets the ordinary beachgoer’s eye. It’s her early works about the natural world and the sea in particular that illustrates her love for the sea, and that love is infectious. Part One of the book explores the North Carolina coast, while Part Two follows the little mackerel Scomber out on the open sea, and Part Three follows Anguilla the eel on the very bottom of the ocean floor. In each chapter, she shows us what we can see, and then she shows us what a trained biologist sees. The two visions combined paint a complete picture. Here she describes a summer day in a New England harbor:

Once through the inlet, the sea spread out fanwise into the cove, running swiftly into the old sea wall that roamed the eastward rim of the harbor to slap against the wharf pilings and the western half of the harbor, the water caught the reflection of the overhanging scrub oak and cedar and stirred the stones of the shore line to a soft chatter. . . . Over the floor of much of the cove the sea poured through patches of seaweed that few waist high to a man. Wherever a rock lay on the bottom one of these underwater gardens grew, and as the floor of the cove was very rocky its pattern as seen from above by the gulls and the terns was mottled darkly with many weed patches. Over the sand bottomed clearings between the seaweed thickets the little fishes of the cover poured in restless shoals. The shining green and silver caravans wound in and out swerving, diverging and merging again or at a sudden fright, darting away like a shower of silver meteors.

I have spent many summers in and around New England harbors, and aside from spotting a few lone fishermen dangling their lines from the piers, I never considered how much life circulated in and around the sea. This is the kind of book where you savor every word on every page to savor the vision the author’s love of science and love of words have made.

In 1952, Rachel Carson won the National Book Award for her second book The Sea Around Us. In her acceptance speech she talked about her particular way of writing about the natural world:

My own guiding purpose was to portray the subject of my sea profile with fidelity and understanding. All else was secondary. I did not stop to consider whether I was doing it scientifically or poetically; I was writing as the subject demanded.

The winds, the sea, and the moving tides are what they are. If there is wonder and beauty and majesty in them, science will discover these qualities. If they are not there, science cannot create them. If there is poetry in my book about the sea, it is not because I deliberately put it there, but because no one could write truthfully about the sea and leave out the poetry.

Under the Sea-Wind, as well as Rachel Carson’s other naturalist books, is the perfect companion for dreary days away from the seashore or anytime at all one wants to be comforted by soothing descriptions of above-sea and undersea life. Renewed interest in her work is encouraging in the current climate change crisis, but it’s hard not to wonder what she would write about or how she would write it if she were here today. Her mid-century classics are elegant and specific reminders of how much we have left to lose.