Home
»
Interviews
»
“Becoming A Parent Made Me A Ruthless Editor of My Own Work”: An Interview with Elizabeth Onusko 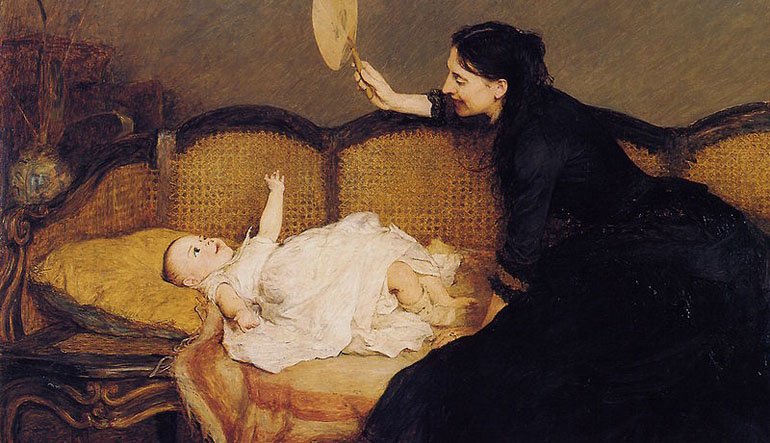 Elizabeth Onusko’s poems are sharp-edged, sometimes bleak, but also very funny; they feel timeless, but also of the moment in their portrayal of a hopeless modern world—ours—and the struggles and complicated emotions surrounding infertility and, ultimately, pregnancy and impending parenthood. Her debut collection, Portrait of the Future with Trapdoor, was published by Red Paint Hill in 2016. She is also the author of an earlier chapbook, The Prague Winter. Elizabeth is the editor of Foundry, the assistant editor of inter|rupture, and a founding editor of Guernica. We caught up via e-mail earlier this winter to talk writing, editing, parenting, and how that third activity reshapes the other two.

Matthew Thorburn: Portrait of the Future with Trapdoor is the kind of book I love—a collection that encompasses a variety of approaches, yet feels unified by voice and theme. Would you talk about how you put this book together?

Elizabeth Onusko: This book took a long time to arrive. When I completed my MFA in 2007, I felt lost creatively. I also had a full-time job and worked nights and weekends as Guernica’s managing editor and publisher, so there wasn’t much time for writing. In fact, I didn’t for years, and when I finally started up again, only a handful of poems were worth keeping.

The poems became necessary and urgent after I had an early miscarriage. I had always felt a need to write, but until then, I hadn’t been able to connect with that need. I left Guernica, which was hard to do, and developed a more consistent writing practice. Shortly after my daughter was born, I realized this disparate pile of poems could be formed into a book. Thematically, I think of it as a Venn diagram. Two seemingly unrelated subjects—illness/infertility and war/dictatorship—overlap in the poems. What they have in common is revolution, a sense of disrupted order and a loss of control. Once I understood that, the collection seemed to cohere.

MT: What’s your writing process like? How does a poem start for you?

EO: I write after my daughter goes to bed. It works out well—my analytical mind is exhausted by then, and my subconscious takes over. I also daydream lines and images while washing dishes or listening to NPR. (The key is remembering to write them down!) When I am open to receiving ideas, they tend to come. It’s a matter of being attuned.

That said, I definitely go through spurts. I used to get anxious when slower periods started, but now I realize they are necessary and do my best to help them along by not fighting them. The field needs to be fallow for a while. Poets tend to be too focused on output. I say this as someone who is aspiring to live this way—we need to be better about input. When writing gets harder, I try to read more, pay closer attention to other forms of art, and take walks. Cultivate my sense of curiosity. Sit with my feelings. Eventually, the momentum returns.

It used to take me awhile to admit when a poem wasn’t working. I was stubborn and revised poems over thirty or forty drafts. Becoming a parent has made me a ruthless editor of my own work. Poems don’t seem as precious anymore, and time is limited. Having several poems underway simultaneously helps take the pressure off of any single one. I also keep a computer file that is a purgatory for promising scraps, which makes it easier to let go of poems that aren’t coming together. I refer back to the file often, and it’s amazing how a random line from years earlier can suddenly fit into a poem I’m working on now.

MT: More specifically, how did “The Evidence” start?

EO: I have endometriosis, which is a chronic illness. One in ten women has it, though many don’t realize it. Women’s pain tends to be downplayed by medical providers, and endometriosis is seriously under-researched. It takes, on average, almost a decade to be properly diagnosed (which can only be done via surgery).

Thinking about this is how “The Evidence” came to be. I am fortunate to have strong support from my family. Even still, during the years before my diagnosis, I felt very insecure—I had no way to prove my pain existed. It’s exhausting to have to keep insisting that your reality is, in fact, real, especially while dealing with intense physical pain. (Historically, women suffering from endometriosis have been labeled hysterics and witches.) I started to doubt myself. I felt helpless and ashamed. “The Evidence” is my attempt to own these feelings—as if by indicting myself, I was able to absolve myself.

EO: I just started to submit my new collection, We Uncertain Animals. I am excited about it and ready to send it out into the world, but I am also taking a deep breath. Finding the right home for a book can be a long, expensive, and disheartening process.

EO: Cori Winrock’s beautiful suite of poems in Boston Review has stayed with me. In terms of books, Anne Twitty’s translation of María Negroni’s Night Journey was stunning. I also loved Monica Youn’s Blackacre and Phillip B. Williams’s Thief in the Interior.

Read poems from Portrait of the Future with Trapdoor here and here.