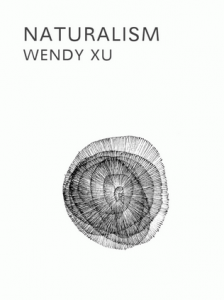 Wendy Xu’s Naturalism opens with a dedication: “To immigrant parents.”

That’s one of the most direct statements in the chapbook, and the eleven poems that follow create such a surreal mixture that it’s hard to tell if Xu’s lines “fixed orbit satisfies / my aesthetic need” from “Civil Dusk” are supposed to read as a playful push.

But unlike “surrealism” as it’s typically generated—that is, from an upper-class white male-identifying source—Xu’s surrealism reads as almost documentary. Instead of a surrealism based on “what if” and fantasy, the approach of Naturalism relies on flipping perception of pre-conceived, accepted, or currently understood systems of language. For Naturalism makes you realize how bizarre the “natural” world really feels. It’s how much a hurt can become, how much an everyday phrase can insidiously work and worm through, how much we disbelieve our own beliefs when we begin investigation.

For what is immigration and “becoming naturalized” if not a surreal, nearly-nightmare-fantasy, and totally queering experience? To cross one imagined border into another nation, to “become” natural—as if, pre-citizenship, a human being was “unnatural” before. Think, too, about the axle on which anti-immigration rhetoric rotates: “some people” are “illegal aliens”—not human / instead subhuman, unnatural, Other.

Naturalism, as a surreal turn on this phrase—making it an “ism”—gives Wendy Xu’s readers the power to re-consider those parts of language constantly regurgitated by televisions and computer screens. Like those poets who intensely study nature, the “naturalist” in Xu’s poetry is one who sits in a world of political chaos and violence and finds room to breathe. This is, in effect, the opposite of a “nationalist”—that is, someone who can only blindingly repeat. As Xu writes, “under God / under pressure.” The question is not “what are we really saying?” but “what are all of the things we are saying when we enunciate?”

Immigration is marked by clear goals. It is supposedly “linear”—from point A to point B, for X and Y reasons. In this ideal lie, it works “upwards” and in terms of progression. To undercut this idea, there are the lines opening “Task Force,” which read, “Moved all the way here to watch / television alone, / swallowed by the grim // news grinning.” When one realizes that the new place is still unsafe—though in a different way—all dreams mutate. “By Action” features several thoughts on love, but none is more painful than “I love keywords, like / love is / an exodus.” Love is always a leaving based on abstract-nouns input into a searching mechanism. But then love faces the reality of isolation, where “when I became alone the whiter hand / of my country sweeping towards me,” as Xu marks in “Recovery.”

That awful and omnipresent “whiter hand of my country” constantly tries to make itself invisible. Xu will have no part in this act. You may stay “in your delighted / heavy abstraction,” but she will write, as in the title poem, “venture capitalists / of America, kill yourselves.” Is it too much to ask that “nothing make / of us a roaming target”? Never, but we live in and under a regime that wants violence against people of color, especially people of color who identify as women, to go unrecognized, to become almost cruelly “natural.”

The fantastic middle poem “Phrasis,” opens with the lines: “Imagine a person upon which nothing is lost, pulling the purple cabbages / up head by head, half like devotional.” The sadness and victories of Naturalism are both realized here: the person upon which nothing is lost is imaginary (no one can recognize everything), but if one could it would be a tragedy (recognizing all and forgetting nothing, like Borges’ Funes, means you can’t “go about” your daily life). Being woke and alive in a time of chaos means that it is more difficult to go through daily life; but that active awareness also means you are in the world as fully as you can be.