Home
»
Critical Essays
»
Berg, The Weird, and The Eerie 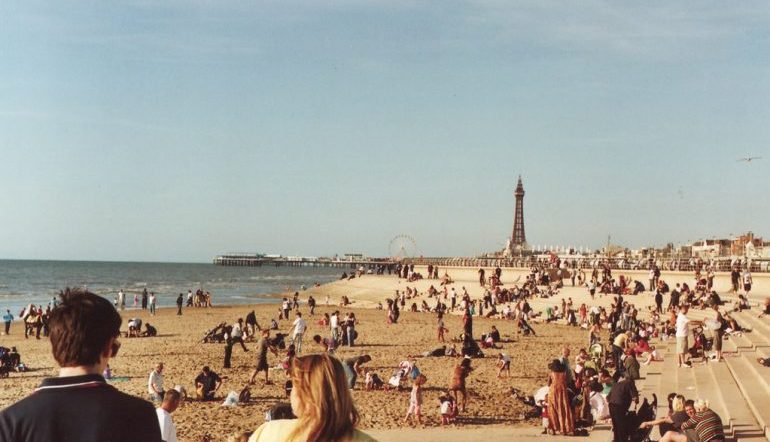 There is a certain absurdity to the British seaside. Beachgoers, in farcical denial of the lack of sunshine, cover their summer linens in eiderdown, smear their jumpers with low-factor sun cream, gorge on battered meals, and ready their sun loungers adjacent to dingy, carpeted arcades in an effort to bring summer to a reluctant climate. What is left at the end of the season is a profound sense of loss. As the nights grow longer, the shops closing earlier and the bandstands going unused, the seaside becomes a vacuum, filled with the disembodied noise of gulls wailing in the distance.

This seaside image inspired the noir novels of Graham Greene and Patrick Hamilton, as well as my own memories of off-season trips to Sussex as a child. When swimming was not an option, I used to play in the marshes until my fingers were coarse and swollen from the cold, and the darkness rendered the water and the sky indistinguishable. I would retreat to the confines of an isolated house where, between kettle-boiled baths and open fires, I felt completely safe—until left alone. When the sea-air stung the window panes and reverberated through the shutters, I felt the environment shifting from an endless expanse to a suffocating void.

Set in Brighton, Ann Quin’s debut novel, Berg, originally published in 1964, plays on this contradiction, creating a surreal world of broken people and things. Her account of the sea is thick with a corrupted nostalgia, where some days feel lifted out of a Martin Parr photograph, smeared with sticky “candy-floss fingers,” while others are blurred by out-of-season spray or bogged down in tendrils of seaweed. This fluctuation echoes Mark Fisher’s distinction of the weird and the eerie: in his final essay, Fisher describes the weird as the obtrusion of something unusual, whereas the eerie is characterized by a distinct lack of the expected. Pervading abandoned fairgrounds, industrial wastelands, and Alfred Hitchcock films, he finds the eerie to be almost supernatural, moving within the deficit of sociability. Quin’s acerbic wit cuts between these two modes, offering us both: the presence of a hair-tonic salesman coupled with the absence of his own hair, the emergence of a ventriloquist dummy in the place of a corpse, and the company of a much-loved budgie without a voice.

In, “The eeriness of the English countryside,” Robert Macfarlane attributes the rise of eeriness in depictions of the pastoral to “contemporary anxieties and dissents,” where mass surveillance, war, and environmental exploitation turn previous idles hostile. Today, as the rural and the metropolitan vie over British identity, this analysis feels all the more fitting. The strangeness of British beaches is not just a result of their absent crowds but also their particular histories. It is easy to forget that our borders are defined by the same sand on which we sunbathe, a fact that carries a violent past with it. In The Rings of Saturn, W. G. Sebald chronicles his journey across the East Anglian coast and into the mainland. Throughout the book, he describes his anguish upon finding “traces of destruction, reaching far back into the past, that were evident even in that remote place.” Our awareness of this brutality is perhaps too easily swept away, like a sandcastle overnight, but it still lingers, if under the surface.

While this lingering violence may have contributed to a sense of foreboding in Berg, it was certainly not overt, for it was Quin’s disdain for politics that set her apart from the other British experimental novelists of the 1960s. Whereas Eva Figes, for example, viewed experimentation as a means of conveying the complexities of class struggles, Quin claimed that class “never bothered [her]” and that she was “sick to death” of its predominance in 1950s social realism. Quin favored the personal over the political, rooting her novel in something entirely relatable: the eeriness of estranged parents and the weirdness of their re-emergence.

In many ways, Berg is a novel lacquered in her own biography. Set in the town where Quin was born and later died, her protagonist is bought up without a father, much like herself. In the absence of one parent, Aly Berg is drawn into a co-dependent dynamic with his mother, something that is explored through their ongoing correspondence in the book—he is her “cabbage,” her “darling,” her “good boy.” Given the overlapping life stories of author and character, it feels particularly loaded when Quin dedicates the novel to her own mother.

Broadly speaking, however, Aly’s perversions and taste for violence can be taken as a rebellion against the ethical dogmas of post-war Britain, something Quin was known to resent. In addition, Quin shares with her contemporaries an affinity for experimenting with form. In The Unfortunates, B.S. Johnson bound each chapter individually with the intention of them being shuffled prior to reading, whilst Alan Burns’ novels were known to be comprised of bric-a-brac he found on the street or in the newspaper. One of the most defining features of Berg is how Quin refrains from distinguishing between the internal world of her characters and public speech, trapping the reader within a nebulous of subjectivity. She later denies the reader the climatic point of the novel, the moment where Berg achieves what he set out to do: murder his father. Instead, we are absorbed further into his amnesia and delirium, dragged from the confines of a stuffy hotel room into the open waters, chasing him until his inevitable collapse in front of the railway station. When Quin deviates from literary tradition, it never feels contrarian, but rather always seems to compliment her characters: they are not fussy, so why should her writing be?

The problem with classifying an author as experimental is that the term falls prey to its own monolith. When used descriptively, it seems to define a work against what has come before it and not on its own terms, whereas when used as a verb—to experiment—the word connotes something entirely different. Evoking an image of palms slushing in paint or an instrument strummed out of tune, experimenting seems to involve playing with the same medium but in a different way. Quin’s work is sooner comparable to the latter than the former: throughout Berg, she appropriates techniques from Greek tragedy. Akin to the determinism drawn out by a chorus, the book famously begins on a fatalistic note: “A man called Berg, who changes his name to Greb, came to a seaside town intending to kill his father.” What follows is an Oedipal tale of revenge, where our hero, overcome by his own fragility, fails to deliver on his plans. The underlying tragedy is, however, anything but inflammatory; Quin, rather, takes aim at the difficulties of daily life, bringing to light our lack of control and the need for introspection when faced with even the simplest of questions.

Quin died by suicide in 1973, after publishing three more books that have since fallen largely into obscurity. While the key to her revival may be in the timelessness of her message, the process of retrieving her work is a testament to its truth. Following the publication of The Unmapped Country: Stories and Fragments last year by And Other Stories, Quin has enjoyed a renaissance; the assembling of this book, however, was a fraught exercise of rifling through archives and personal collections, as well as emailing Quin’s ex-boyfriends—a process the editor described as “strange” and “uncomfortable.” In the wake of Berg’s recent reissuing, by the same publishing house, there is a hope that her legacy will be cemented further through an extended readership. Reading her for the first time myself, I was confronted by the uncanniness of finding an author you love and then quickly learning of their premature death. At the same time, I think that it is maybe stranger to learn of someone because of their posthumous success, where their life’s story can supersede their work. Upon reflection, it is perhaps a pertinent instance of the eerie: in the absence of an author, their words will remain.