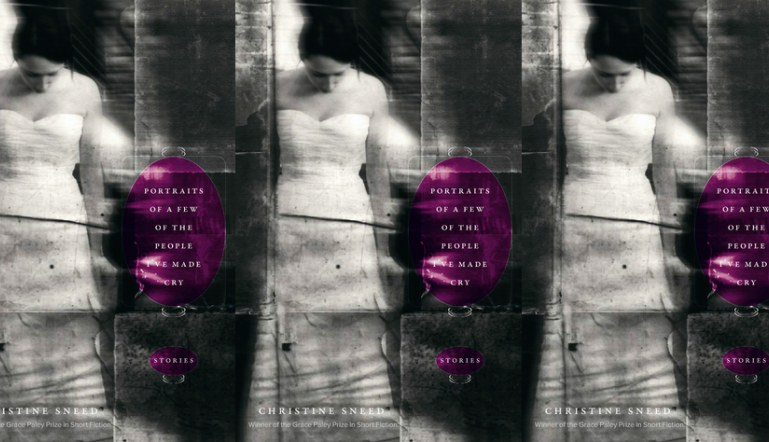 I had been writing fiction for fifteen years and publishing stories in literary journals for ten when Supriya Bhatnagar, the publications director at AWP, called me on a mid-May day in 2009.  Listening to her brief message an hour later, I wondered if some pages were missing from the manuscript I had submitted for the Grace Paley Prize in Short Fiction, but I knew that the contest organizers were more likely to discard it than spend time offering me a chance to correct a sloppy mistake.  Was the call a prank?  Or could it be that I was one of the contest finalists?  (Did they even bother to call entrants about such things?  Wasn’t everything done over email now?)

As it turned out, Ms. Bhatnagar had contacted me for the best possible reason:  my story collection, Portraits of a Few of the People I’ve Made Cry, had been chosen by final judge Allan Gurganus as the 2009 winner of the Paley Prize.  Ms. Bhatnagar wanted to be certain that Portraits was still available.  Hearing this, I almost laughed.  Yes, it definitely was.  I was touched that she thought my collection might win two contests in one year, even though I couldn’t see that happening in either of our lifetimes.

Soon after the call from AWP, Bruce Wilcox at the University of Massachusetts Press, the Paley prize series’ publisher, contacted me to ask for an electronic file of Portraits.  The 2008 winner’s book, Temporary Lives by Ramola D, wasn’t even out yet, but because Allan Gurganus and the initial screeners had done their work so efficiently, we had a longer lead-time than usual for mine.  The publication date for Portraits was set for November 30, 2010, so far into the future – more than eighteen months – that it was hard to believe this manuscript really would end up in book form.

But it did, after some gentle editing, much proofreading, and some anxiety on my end.  I was so sick of these ten stories by the time they appeared in the form of an advance reading copy that I didn’t think anyone would want to read them.  Because I had spent so many hours peering at them and second-guessing myself, these characters and their obsessions seemed depressingly predictable.  Where were the surprises that I had been so proud of when first sending these stories to journals?  I needed the chance to forget them, but there was no time for this.

For one, I had to figure out a way to get review copies into the hands of critics who would be willing to read and write about Portraits.  The publication date late in the year was also, I eventually learned, a handicap.  Most periodicals were already compiling their year’s best lists and paying little attention to new entrants in the local and national races to be reviewed and possibly lauded as one of the year’s best.  Despite the news that is often gleefully reported in the media – i.e. that we’re suffering from a shortage of readers – there is no shortage of new books.

The University of Massachusetts Press staff was very helpful during each step of the publication process, and their promotion person, Carla Potts, sent out ARCs to several advance review media, but this garnered only two reviews.  One of them, however, was Publishers Weekly, and the critic starred the review.  This helped get the news to other media outlets, but from late September through my book’s November release, despite sending out more than one hundred fifty review copies, the press and I, along with the independent Chicago-based publicist I hired, were only able to entice two other periodicals to review my collection.

Since then, a few more reviews have appeared and others are scheduled for upcoming weeks, but I had naively hoped for more buzz and excitement once Portraits became a hardbound beauty.  Using Facebook and pestering friends helped spread the word about my book’s release, but I knew I wasn’t likely to be selling so many copies that Oprah or the Today Show would soon be calling with an invitation to sit on their overstuffed sofas and share the secrets of my writing life and previously hardscrabble times.  There is also the fact that when review copies are requested from the press, which they were by two high-circulation glossies, it doesn’t mean that they will in fact publish reviews.

A rollercoaster ride or a bout with a Slip n’ Slide.  Maybe a game of Sorry! or Twister.  Anyway, I was Boggled (I love bad puns, sorry!) by the whole publicity process.  I felt like I needed to get a better handle on my hopes – they were so often up and then abysmally, brutally, down.

When you publish a book, maybe especially your first, I will also say this – it’s very hard not to check your Amazon sales rank every two and a half minutes.  It’s also very hard not to compare your sales figures to those of books published by friends and acquaintances.  Or the writers you don’t know but admire with an almost erotic devotion.  This is one of the problems that writers (or anyone else) don’t like to talk about – how do you deal with self-doubt, or worse, with jealousy?  Do you try to ignore it?  Do you write angst-filled poems or daily, pathetic letters to tolerant friends?  Do you allow yourself to confide embarrassing secrets about your insecurities to near-strangers at the gym?

Um, yes, to all of the above.  But some days are better than others, and the worst days will eventually give way to less-worse days.  I think often of an essay by Ted Solotaroff that I read several years ago, one in which he stated how pointless and unproductive it is to compare yourself to others – how can you possibly expect to have the same experiences?  And what good is it to belittle your own accomplishments in the face of someone’s apparently greater ones?  There is also no way to know how this person perceives his/her own successes.

Some days, the good days, you will look upon your book and think, “I wrote this.  It’s truly mine.  It’s here on page after page – here in the history we’re all writing together.”

Corny?  Maybe.  But it’s now written in ink, and no one, not even you, can erase it.

This is Christine’s fourth post for Get Behind the Plough.