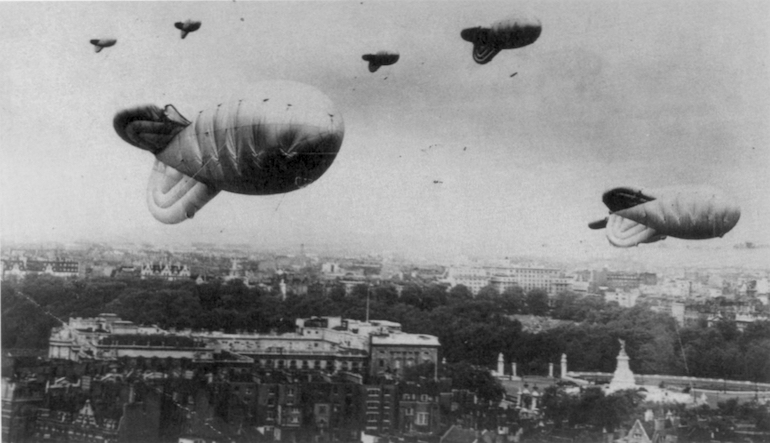 Then I felt like some watcher of the skies,
When a new planet swims into his ken.

London, 1941. Barrage balloons, designed to disrupt enemy aerial attacks, silently dot the sky over the most populous city in the UK. A cheery British Movietone newsreel describes the anti-bombing balloons as “elephants floating serenely above the metropolis.” A young radar specialist in the Royal Air Force, Arthur C. Clarke, gazes up at the silver blimps and muses not of a destructive Luftwaffe blitz, but of a quiet, peaceful arrival by massive alien ships like “gleaming silver clouds” above every major city on Earth.

After the war, Clarke studies physics at King’s College London, nurturing his curiosity by examining the stars and writing fantastical stories. In 1946, he becomes the chairman of the British Interplanetary Society; that same year, he drafts the story “Guardian Angel,” inspired by the image of the barrage balloons, about benevolent alien overlords traveling to Earth from untold light years away to help shepherd in a new golden age of peace and prosperity.

Space travel at the speed of light may someday be possible, speculate scientists at the International Astronautical Federation’s August 1953 conference in Zurich. In the meantime, they set their sights on the more reasonable challenge of piercing the atmospheric lid of the planet with a rocket ship. Over one hundred delegates from seventeen societies, including the British Interplanetary Society, debate the potential effects of space on the human body, but according to a New York Times article, the professional rocketeers at the conference are “more preoccupied with . . . the functions of rockets in war.”

Two weeks later, American test pilot Marion Eugene Carl flies a Douglas Skyrocket higher than any other recorded flight: 25,370 meters. At the same time, the USSR performs a nuclear test, though Professor Samuel Allison, a US expert on nuclear energy, claims that the American military is still winning the arms race: “It is one thing to experiment . . . and something completely different to be able to drop an H-Bomb on a city.” Archival footage of the test shows a desert landscape erupt in a white explosion from which a massive tree of fire and smoke grows upwards to the sky. Nearby, a building disintegrates like sand in a heavy gust of wind.

That week, Arthur C. Clarke’s Childhood’s End is published by Ballantine Books to rave reviews, establishing the amateur astronomer as a major name in the last days of the golden age of science fiction. Clarke is “equally at home in the outer galaxies and the troubled psyche of modern man,” states a review in the New York Times.

The opening scene of the novel shows the space race between the US and Russia suddenly interrupted by the appearance of a fleet of alien ships hovering above the Earth. The Overlords have arrived, and with them they bring the promise of stability and contentment, finally freeing the human race from its incessant strife. But, they warn, the burgeoning era of space travel must come to an end: “The stars are not for man.”

Alien invasions are all the rage, as three days after Childhood’s End hits bookstores, the film version of H.G. Wells’s War of the Worlds hits the theaters. Indeed, UFOs are popping up all over radar screens across the country, causing dumbfounded citizens to crane their necks as they watch the sky. “It Wasn’t a Flying Saucer,” an August headline in the Reno Evening Gazette reads. No, the “pinpoint of silver” that “hovered motionless overhead and winked down evilly at the assembled populace” was just another weather balloon. “Or so say the experts,” the article adds.

In Clarke’s novel, the Overlords counsel humans from the seclusion of their giants ships, waiting fifty years to finally reveal their true forms. When they do at last show themselves, their hesitancy makes sense: “The leathery wings, the little horns, the barbed tail,” all conjure an “ancient terror” dating back to the fall of mankind in the Garden of Eden.

Twenty years after Childhood’s End is published, the progressive rock band Genesis opens their concert in Reading, England, with “Watcher of the Skies,” a song inspired by the novel. Peter Gabriel stands on the edge of the stage, face painted a glowing white, singing into a clutched microphone while leathery bat wings protrude from his head:

Creatures shaped this planet’s soil,
Now their reign has come to an end,
Has life again destroyed life,
Do they play elsewhere, do they know
More than their childhood games?

In 2007, on the occasion of his ninetieth birthday, Arthur C. Clarke records a video in which he reflects on his six-decade career that has produced the science fiction classics Rendezvous with Rama, The Fountains of Paradise, and 2001: A Space Odyssey. “I want to be remembered most as a writer who entertained readers and, hopefully, stretched their imaginations as well.” The former chair of the British Interplanetary Society dwells not on the end of his life, but the beginning of a new age: “Now, I have plenty of time to enjoy vivid dreams. Being completely wheelchaired doesn’t stop my mind from roaming the universe. . . . I still can’t quite believe that we’ve just marked the fiftieth anniversary of the space age. We’ve accomplished a great deal in that time, but the golden age of space is only just beginning.”