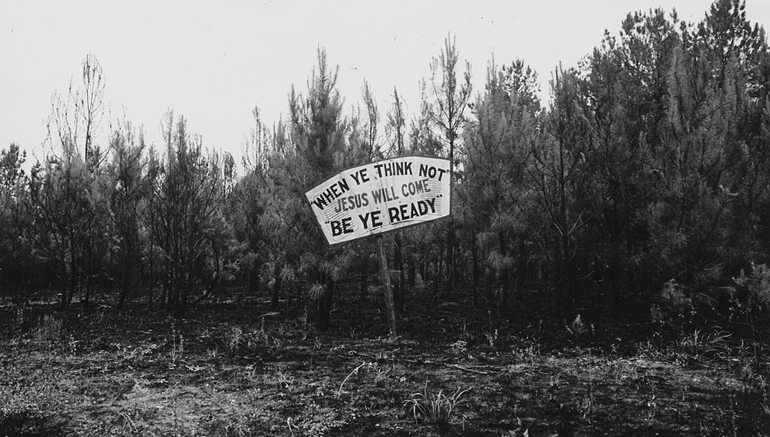 Lord, a good man is hard to find.

General William J. Bush of Fitzgerald, Georgia, 106 years old, sits on the stage at his sixty-two-year-old wife’s college graduation, beaming out at the audience in his pristine $300 Confederate uniform, gifted to him by a movie company. The “General” was never more than a major in the Confederate Army, but he is one of only a handful of surviving rebel veterans, and he periodically takes part in celebrations of the Southern states’ antebellum glory.

The General tells a crowd of fans that he doesn’t much care about his wife’s “book-learning,” as long as she remains a good cook. As for the secret to his own longevity: “Every time a pretty girl gets in my way, I let ’em have a good kiss—and they have to turn around and kiss me back.”

After reading an article on the General in her local newspaper, the Milledgeville Union, Flannery O’Connor is inspired to write “A Late Encounter with the Enemy,” in which the General sees his own “black procession” of death right there on the graduation stage. A year after charming reporters at his wife’s graduation, the real General is buried in Georgia with an honorary military escort that fires cannons over his grave while the Confederate flag flies at half-mast.

The story, along with nine other tales of rural southern life, appears in O’Connor’s first collection, A Good Man Is Hard to Find, published on May 12, 1955. These narratives depict a South struggling for identity in the middle years of the twentieth century, peopled with crooked Bible salesmen, earnest preachers, escaped convicts, one-armed grifters, and wayward souls seeking salvation, or at least satisfaction. O’Connor presents the quotidian laced with subtle menace, driven by the threat and, more often than not, delivery of violence.

“A good man is hard to find,” reads a vague help wanted ad in the back page of the Thomasville, Georgia’s Times Enterprise. “And so is a good job. I have a job which offers security and way above the average earnings. You may be the man.”

Advertisements across the nation promise readers they’ll find what they’re looking for in a new TV, wall-to-wall carpet, a good life insurance policy, or Jesus.

A classified listing in the Rocky Mount Telegram in North Carolina seeks a good “Bible salesman, or woman,” to make over one hundred dollars a week while saving souls.

One student at Corsicana Junior High School in Texas believes that Americans are losing the battle for their souls. Two weeks after O’Connor’s collection is published, the young man addresses the crowd at his graduation with fervor: “Today, we . . . are on the threshold of a new day. The pendulum of time is swinging back. A nation can go just so far toward moral degradation, then it either faces complete ruin, or a resurgence of conscientious rightful living. We youth of today stand at these crossroads.”

Eight million Southern Baptists agree. That week, at their annual convention in Miami, Florida, fifteen thousand delegates call for a “Crusade for Christian Morality” to help galvanize the nation into a “moral awakening.”

Meanwhile, in Jacksonville, Florida, a young and not-quite-famous Elvis Presley gyrates his hips on stage at the Gator Bowl Baseball Park, prompting a riot during which his clothes are torn off by a mob backstage. Amid the ensuing national excitement around rock ‘n’ roll, a reverend in Iowa claims Elvis is “morally insane.”

On a road trip down to Florida, the family in the collection’s titular story runs into a serial killer who calls himself the Misfit, a courteous psychopath who has freshly escaped from federal prison. O’Connor resists the urge to explain the villain’s insanity with a backstory, instead dropping in cryptic bits of dialogue that both reveal and obscure. “No pleasure but meanness,” he snarls.

One of America’s ten most wanted men is proving hard to find. Newspapers across the nation detail the gregarious bank robber’s long evasion of the FBI, his eventual capture, and subsequent escape from jail. To aid in his arrest, authorities flesh out his character: he enjoys Packard automobiles, oyster stew, and sour mash whiskey; he is an excellent violinist, guitarist, and banjo player; he is a sharp dresser and also a desperate, hardened criminal who carries a .32 caliber pistol in his glove box.

From one story to the next, O’Connor’s characters mourn a decaying world. Appearances often are deceiving, and malice and duplicity simmer below a surface of decorum. One waitress in a roadside restaurant laments, “It isn’t a soul in the green world that you can trust.” Her patron agrees: “Everything is getting terrible.”

In “Good Country Folk,” a young Bible salesman takes advantage of a woman and steals not her money, but her artificial leg. He justifies his actions with nihilism: “I’ve been believing in nothing ever since I was born!”

But his victim, a thirty-two-year-old student of philosophy has achieved a clarity of her own: “We are all damned . . . but some of us have taken off our blindfolds and see that there is nothing to see. It’s a kind of salvation.”