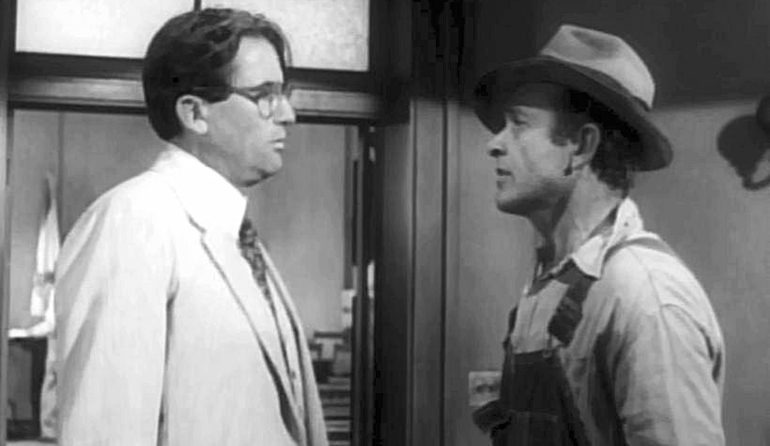 September 14, 1919. A lynch mob gathers outside of the county jail in Monroeville, Alabama. They are there for Frank and Brown Ezell, father and son, who have just been arrested for the murder of an elderly white store owner. Hanging the two black men, the crowd demands, is the only way justice can be served. For fear of their safety, the prisoners are moved to another facility.

Amasa Coleman Lee, a young attorney with no criminal experience, is appointed to defend the Ezells. He works feverishly on the case, but the jury, on which sits one of the murdered store owner’s sons, ultimately agrees with the lynch mob; the Ezells are sentenced to death by hanging, and a large crowd braves the cold December rain to witness the execution. A reporter for the Monroe County Journal decides to spare his readers of the day’s “frightful details,” but offers this plea for the future: “Let us hope that there may never again be occasion for similar sentence of the law.”

Seven years later, on April 28th, 1926, the young attorney becomes the father of a little girl named Nelle Harper Lee. She is born into a world of violent racial divide and vigilante justice: two days before her birth, a black woman in nearby Birmingham is attacked and killed in her home by a gang of Ku Klux Klan members; that same day, a church is burned and nearly every black citizen is driven out of a New Jersey town by an angry crowd after the murder of a white man. “The negroes left and the crowd returned to the center of the city,” the New York Times reports. “Not a negro was to be seen on the streets this evening.”

On July 11th, 1960, Harper Lee publishes her novel, To Kill a Mockingbird, about a young girl named Scout Finch negotiating the joys and perils of adolescence in the racially tense atmosphere of rural Alabama in the mid-1930s. Scout’s father, Atticus, becomes a polarizing figure in the fictional town of Maycomb as he defends in court a young black man accused of raping a white woman.

Four days before Christmas, 1934, a mob of 500 storms and sets fire to a courthouse in Shelbyville, Tennessee, where a black assault suspect is being held. Four people are killed as the National Guard fights the mob back; the 22 year-old suspect, dressed up in a guard uniform, gloves, and gas mask, is smuggled through the maddened crowd unnoticed and transferred to another county.

On Halloween night, 1935, when Nelle Lee is nine, there is a much anticipated dance and costume contest at the Fairview High School auditorium up in Cullman, Alabama. The student group responsible for the party takes out an ad in the local paper to drum up some excitement: “On Halloween nite the witches and bats fly, and the ghosts walk at Fairview High school. If you miss this Carnival you will miss the biggest thing of the season. We are having a real carnival and we want you to get the benefit of it.”

Near the end of the novel, walking home from just such a party, Scout and her brother Jem are attacked by a disgruntled citizen of Maycomb who is out to punish Atticus Finch for his defense of a black man.

Days after To Kill a Mockingbird hits bookstores, a young John F. Kennedy officially accepts the democratic nomination for president. In his speech at the Los Angeles Memorial Sports Arena, he speculates that “the world is changing. The old era is ending. The old ways will not do…a peaceful revolution for human rights—demanding an end to racial discrimination in all parts of our community life—has strained at the leashes imposed by timid executive leadership.”

In July of 1960, the U.S. is indeed changing. Weeks earlier, a newspaper in Alabama reports that “a white college student and seven negroes were convicted of disorderly conduct today for eating lunch together in a Montgomery Negro cafe.” Three white men in Little Rock, Arkansas are caught in the act of lighting a fuse that would blow up a dormitory at Philander Smith College, an all-black institution. That week, a 19 year-old woman named Corinne Huff from Youngstown, Ohio, becomes the first American black woman to compete for the title of Miss Universe.

In the south, violent posses bent on revenge continue to hunt black suspects and gather in front of jailhouses, while college students at the Newport Jazz Festival riot in protest of the lack of tickets available. These “ruffian youths in Bermuda shorts” hurl beer cans and epithets at National Guardsmen, while Muddy Waters serenades the chaos with the impromptu “Goodbye Newport Blues.”

Amid this unrest, a journalist for the Anniston Star enjoys a moment of serene summer reflection from his back porch in Ohatchee, Alabama. “The most wonderful part of these beautiful days comes in the late afternoon between sunset and darkness…The hummingbird sipped its nectar. Mingled with the perfume of the mimosa tree was that of a magnolia. A mockingbird swooped down after an early firefly…Temporarily, all my troubles had vanished, and over the world there was peace.”

And Scout herself finds clarity on a drizzling autumn night, despite the tumultuous months that preceded it. Temporarily, over her world comes peace, and with it Scout glimpses a new perspective: “The street lights were fuzzy from the fine rain that was falling. As I made my way home, I felt very old…[a]s I made my way home, I thought Jem and I would get grown but there wasn’t much else left to learn, except possibly algebra.”