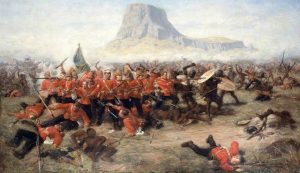 Now what’s going to happen to us without barbarians?
Those people were a kind of solution.

—C.P. Cavafy, from his poem “Waiting for the Barbarians”

May, 1980. The menacing presence of Darth Vader, hammer of the evil Empire, darkens cinema screens across America as the “Imperial Death March” bellows for the first time from movie house speakers. Fleeing the Empire’s tracking probes, fair-haired freedom fighter Luke Skywalker retreats deeper into the frontier of a galaxy far, far away. The Jedi savior hones his skills with the lightsaber in preparation for the Empire’s cataclysmic counterattack.

A few months later, on a Saturday morning in October, the post-apocalyptic cartoon Thundarr the Barbarian makes its debut on the small screen. The titular hero, blonde and dashing and simple, rides through the crumbled landscape of Manhattan, a wilderness spotted with the ruins of ancient empire, battling the armies of a nefarious wizard king with only his trusty steed and his mystical Sunsword.

Another “barbarian” arrives in 1980: Sione Havea Vailahi, a professional wrestler from Tonga, enters the ring as a “face”—a good guy—but fails to capture the sympathies of wrestling fans. When he is rebranded as “The Barbarian,” a villainous “heel” draped in animal fur and bedecked in a bone necklace and horned helmet, his popularity soars.

On October 26th, South African author J.M. Coetzee’s novel Waiting for the Barbarians is published. The unnamed narrator, an imperial magistrate stationed in a colonial settlement on the outskirts of the unspecified “Empire,” enjoys the languorous ease of his privileged position, presiding over the local court, writing case reports for the Capital, and exploring the material remains of vanished cultures half-buried in the desert sands. The magistrate regards the tribes of people outside the city walls, the “barbarians,” with little more than muted sympathy and mild curiosity.

But when rumors increase of a gathering barbarian invasion, the magistrate’s outpost is visited by officials from the Capital who bring with them the familiar tools of oppression: ethnocentrism, paranoia, and coercion by means of torture. The magistrate muses, “one thought alone preoccupies the submerged mind of Empire: how not to end, how not to die…it is cunning and ruthless, it sends its bloodhounds everywhere.”

Helpless to stop the cycle of violence in front of him, the magistrate wonders, “will we live to regret this blood spent so lavishly in the sand?”

The day before the book’s release, an event both lavish and bloody unfurls in a sporting arena in Bophuthatswana, an independent black republic within South Africa. Gerrie “The Boksburg Bomber” Coetzee (no relation), a white South African, and Mike “Hercules” Weaver, a black American, face off for the heavyweight boxing title of the world. A predominately white crowd of 17,000 cheers raucously as Coetzee enters the ring accompanied by a chorus girl who carries a South African flag and wears “a bunch of orange feathers on her head, a pair of net stockings, some sequins and very little else.” The Star Wars theme plays over the loudspeakers as the local hero jabs the air in front of him.

After thirteen rounds of combat, “Weaver’s gradual demolition and sudden destruction” of Coetzee is “like a cold rain in the desert” for the hushed spectators. Hordes of disappointed fans shuffle into the night beyond the arena, where the segregationist Apartheid regime in South Africa casts a shadow of racism and oppression whose roots trace back for centuries.

100 years earlier, the age of New Imperialism begins in Europe. British, German, French, and Belgian convoys plunge into Africa, scouring the land for resources while conquering and subjugating the native Africans. For these European empires, it is a time of ardent patriotism and excitement.

A January 1880 London Telegraph headline exoticizes the people of Africa: “Adventures in Africa: Festive Monarchs of the Dark Continent.” The article details a French official’s encounter with an African king who has just eviscerated 100 of his own men to read their entrails for omens regarding this strange foreign visitor. With no clear omen surmised, the king accepts the Frenchman into his court, but demands a flask of brandy as a gift. It is only after the “festive monarch” gulps down the entire flask and falls into a state of “quiet ecstasy” that he is finally able to be pacified.

In October of 1880, exactly a century before Coetzee’s novel appears, skirmishes have erupted in South Africa between British Colonial forces and the indigenous Basuto people. In an article headlined “War and Rapine in South Africa,” the New York Times relays a dispatch from Cape Town: “Magistrate Hope and his two clerks were murdered while unsuspectingly witnessing a war dance. The government has called out 3,000 more colonial troops…the village of the Basuto Chief Lerothodi was stormed and burned on the 22nd. The rebel losses were considerable, while our loss was one killed and ten wounded. Volunteers are moving into the Transkei district to suppress the outbreak…”

Broken and battered by the very system he serves, the narrator of Waiting for the Barbarians no longer recognizes the familiar contours of a “hero” or a “heel.” Quietly, he waits for the impending barbarian siege.

“Is there any better way to pass these last days,” he wonders, “than in dreaming of a savior with a sword who will scatter the enemy hosts and… grant us a second chance to build our earthly paradise?”