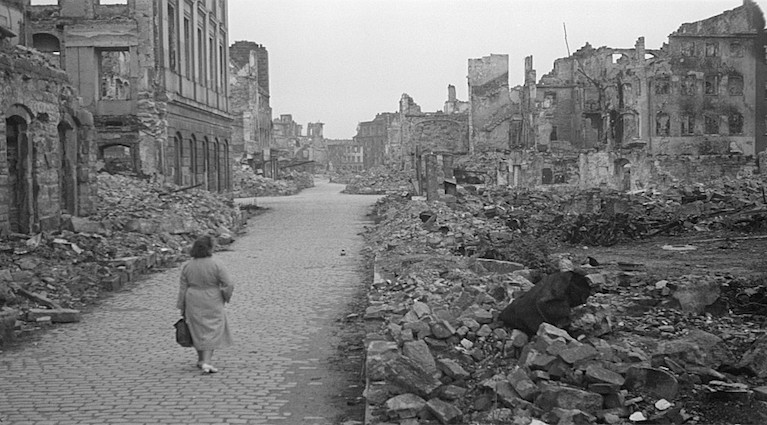 This blog series, Big Picture, Small Picture, provides a contextual collage for a chosen piece of literature. The information here is culled from newspapers, newsreels, periodicals, and other primary sources from the date of the text’s original publication. This particular entry takes on a wider scope so as to address some of the larger themes from the novel.

Then the Lord rained down burning sulfur on Sodom and Gomorrah—from the Lord out of the heavens. Thus he overthrew those cities and the entire plain, destroying all those living in the cities—and also the vegetation in the land. But Lot’s wife looked back, and she became a pillar of salt.

Edward R. Crone Jr., private in the 423rd Regiment of the 106th Infantry, slumps against the wall in a POW hospital in Goerbitz, just outside of Dresden, Germany, making sketches of the soldiers around him in a little notebook. The gangly and loose-limbed twenty-one-year-old waves away even the meager rations offered to him, his body weakening as his mind unfastens from the present moment.

Fifty-five days earlier, as a prisoner of war, Crone emerges from an underground cellar to witness the wasted landscape of Dresden, still smoldering after eight hundred Allied airplanes dropped over three thousand tons of explosives out of the heavens.

One hundred twenty-one days before Goerbitz, freshly captured after the Battle of the Bulge, Crone is marched across snow-dense fields by Nazi soldiers, flanked by his fellow POWs—Gifford, Kurt, Duane, Gordon. The procession winds through the elegant streets of Dresden, the “Florence of the Elbe,” and ends in front of a row of slaughterhouses that have been cleared to shelter American and British prisoners.

One thousand thirty-eight days before Goerbitz, Crone is standing on a train platform in Geneva, New York with his friend and fellow Hobart College student, Will. The two freshmen are shaken to the core, as they have just seen what happens when a man staggers in front of a speeding commuter train. Soon they’ll give their witness reports to the officers on duty, then pool their money for a cab back to campus.

Now Crone is posing for the yearbook photo of the Stamp Club at Brighton High School in Rochester, New York, and now he is giving a speech at his Eagle Scout ceremony, and now, with a heart weakened by malnutrition, Crone breathes his last breath in the POW hospital on April 11th, 1945.

Two months later, Crone’s fellow POW, Kurt Vonnegut Jr., describes his capture, internment, and subsequent liberation in a letter to his family back in Indiana: “Well, the supermen marched us, without food, water or sleep . . . a distance of about sixty miles. . . . The Germans herded us through scalding delousing showers. Many men died from shock in the showers after ten days of starvation, thirst and exposure. But I didn’t. . . . On about February 14th the Americans came over, followed by the R.A.F . . . and destroyed all of Dresden—possibly the world’s most beautiful city. But not me . . . I’ve too damned much to say, the rest will have to wait . . .”

The rest of what Vonnegut has to say about Dresden waits for eight thousand seven hundred seven days until March 31st, 1969, when his novel Slaughterhouse-Five is published. The story follows anti-hero Billy Pilgrim, inspired by Edward Crone Jr., as he survives the Battle of the Bulge, German internment, and the Dresden firebombing, finally settling into a comfortable life as an optometrist in upstate New York.

But Billy Pilgrim has come unstuck in time. Without warning, he shifts from one point in his life to another; now he’s staggering from a plane crash in the mountains of Vermont; now he’s losing consciousness on the bottom of a YMCA swimming pool; now he’s being kidnapped by a flying saucer, whirring like a “melodious owl” all the way back to the planet Tralfamadore.

Weeks after Slaughterhouse-Five debuts, a girl in Le Mars, Iowa has a run-in with an unidentified flying object that flashes green and red lights above her house and whines like “an extra large mosquito.” At nearly the same moment, on the other side of the earth, United States B-52s drop three thousand tons of bombs on the Vietnam-Cambodia border. While out in space, NASA’s Mariner 6 and 7 probes hurtle toward Mars, looking for evidence of, among other things, life.

Four years later, in November of 1973, school officials in Drake, North Dakota toss thirty-two copies of Slaughterhouse-Five into the school’s coal-fired furnace, condemning the novel as obscene. In response, Vonnegut writes a letter to the head of the Drake School Board: “If you are an American, you must allow all ideas to circulate freely in your community, not merely your own . . . it was a rotten lesson you taught young people in a free society when you denounced and then burned books—books you hadn’t even read. You should also resolve to expose your children to all sorts of opinions and information, in order that they will be better equipped to make decisions and to survive.”

A half-century after Vonnegut climbed the stairs from a cellar up to a decimated city, after writing to his family that he had too damned much to say, after authoring fourteen novels, one hundred twenty-three stories, and a host of other works, he tells a journalist that he has finally said it all: “I’m eighty-four years old. There are plenty of other people writing. Let them do it.” Sixty-two years to the day after Edward Crone Jr. took his last breath, Kurt Vonnegut takes his.

Halfway through Slaughterhouse-Five, Billy Pilgrim’s wife asks him if World War II was awful. “Sometimes,” he replies, then is struck by a truth that he thinks would make a good grave epitaph for him. Here, Vonnegut inserts himself into the novel and muses that it would make a fitting epitaph for him, too: “Everything was beautiful and nothing hurt.”